The second Renaissance Faire and Hunt is going on through the month of December at Mieville Lovelace (21, 185, 23).  This hunt is great for anyone who likes medieval items or simply enjoys the thrill of a hunt.  You arrive on board a ship, and a foot bridge leads to the village.  The village is very creative and captures the mood and spirit of the hunt. 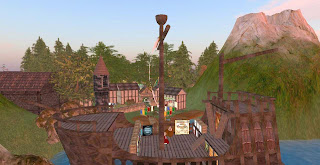 You will hear the sounds of village life—pigs grunting, chickens clucking and townspeople mingling about—as well as medieval music played on instruments like trumpets, harps, and bells.
Tents and vendor stalls circle around a center pond.  Paths lead off to the docks, a tree house, and a jousting area.  Many of the shops have freebies or reduced price specials.  Everything from small candles to huge sailing ships can be found here.  I especially like the vendor who posted the “Will Work for Chocolate” sign.   Me too! 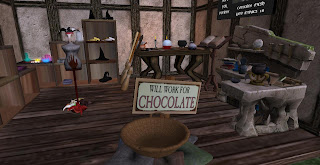 Perryn Peterson has done a great job organizing this hunt.  Perryn is known for the Historical Hunts, including my favorite, the steampunk ones.  A notecard states that there are over 100 shops participating.  I’ve only been able to visit a few so far, but they’ve been good ones.   I especially like the fact that there is a list of participating shops and LMs.  This allows you to continue the Hunt and return later to any spot where the item stubbornly refuses to be found.
In addition, Perryn has set up a mini-hunt in the village that is separate from the Renaissance Faire Hunt.  Fifteen acorns have been hidden very well around the village.  So far I’ve only found 3 of them, but I intend to keep looking. 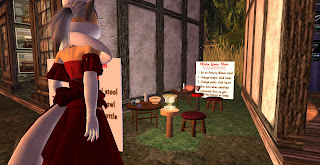 There’s also a make-your-own pottery vendor in the village at Renaissance Faire Isle (70, 148, 21).   This is the first time I’ve seen this type of activity at a fair.  A couple of pottery wheels are set up where you can throw a pot for 25L.  If you don’t like your creation, you can re-set and try again.   You don’t pay until you make something you well like enough to buy.

There’s also a tree house that is reached by climbing a rope.  You have a choice of climbing speeds, too.  There’s a great view of the Faire from here.  Check out the inside, too.


A faire isn’t complete without food.   There’s a tavern in the round here with free food and drinks.   Lots of tables are available, too, for you and your friends to relax and rest up for the rest of the hunt.