Last Sunday on December 30th, Patriot Island held it's final Wounded Warrior fundraiser for the year. Four musicians performed live that night in the hangar in the eastern part of the sim, including Frets Nirvana, who helped organize the event. The event took place from about 5PM to 9PM SL time, and was attended by dozens of residents.

Hi folks, it is time for the last of this year's Wounded Warriors benefits … a great night. Come and help us reach our goal! Time to give to those who sacrifice so much ...

The sim itself had been winterized with a layer of snow. And a Christmas tree set up in the hangar. Pondman Haalan was the first of the musicians. When he got off the stage at 6 SL time, over thirty-seven thousand Lindens had been deposited into the two upturned helmets on both sides of the stage. Next was Shannon Oherlihy, and in another hour the amount was close to doubled, with 72,500 Lindens at a few minutes before 7PM. 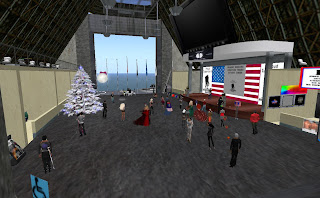 Then Frets himself took the stage, and the crowd went wild, once again close to doubling the number to 134,000 Lindens when he left the stage. Frets helped encourage the flow of donations by occasionally offering to match the next person who deposited a thousand Lindens into the two helmets. The final musician was Ganjo Mokeev, who took to the stage dancing away with his guitar, with a lady on one side and a Tiny koala in uniform and his own guitar in hand on the other. "Ganjo has a wonderful set," announcer GJackie Winkler told, "glad you're not missing a minute of it."

Those attending the event included Sabine McGettin of the Passionate Redheads Relay for Life team, and Dahlea Milena who helps manage Patriot Island. To some, the lag on the Grid was worse than usual that night, and Dahlea tried to help, "I nudged the donation helmets on stage a little since with the lag it was getting difficult to get to them through the people in front! If you still have trouble clicking to them to donate, IM me & I'll reposition them some more!"

The Lindens continued to come in. By 8:12PM, 206,000 Lindens had been raised. "Get those helmets to light up folks," Frets told the crowd, "think of the vets .... " As the cash came in, so did a few wisecracks among the crowd, "Our dinner consists of eating whats left of the Candy Canes." "I had no idea your hips moved like that." "Usually when **** says 'give till it hurts,' she's using her stiletto heels to speed the process along." One lady offered to wear a thong if someone donated 5,000 Lindens. But there was also talk about their closeness to vets, "My Dad was a vet, Korean War." "My son-in-law is a vet." "my ex-son-in-law was a Marine, three tours in Iraq." "I have a Great-Uncle I never met who died in the Korean War." 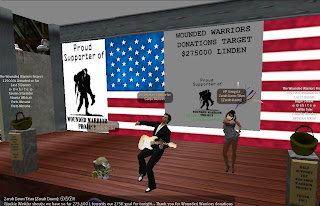 Getting off the stage, Ganjo told everyone over the stream, "Thank you very much everybody! We just reached our goal! Thank you so much!" The praise went around, "God bless the USA, our allies, and the people that serve in the armed forces!" "Happy New Year! May it be filled with amazing moments." Dahlea told the crowd, "Congrats to all the Wounded Warrior Project team for all the hard work and fundraising throughout the year. Thank you from the bottom of this disabled Veteran's heart."

And so, the Wounded Warrior fundraiser, for the month and year, came to a successful close. The next event takes place on Sunday, January 27th.