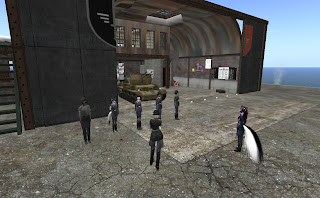 On Monday January 14th, the Luftwaffe JG-52 group in New Bastogne held a small ceremony for awards and promotions. The pilots were judged by the ranking officers as showing good teamwork and combat skills. The ceremony itself was conducted mainly by JessicaBelle Dayafter, whom was recently promoted to Commander, second only to Vickster Khun who owns the sim. Jessica promised to perform her job well, and stated she would continue to help build up the air group.

With "big band" music from the 1940s in the background, the ceremony was not all seriousness. There were a few jokes about an opposing aircraft buzzing overhead, "We'll kick their (tail) later." Of one pilot's long display name Adjutant-Gonzalo de Montalvo y Montignac, Jessica lightheartedly quiped, "I am so not writing out his full name all the time. Hee-hee." And of one pilot's preference for the Me 262 jet fighter, there were wisecracks about her being a "speed freak." 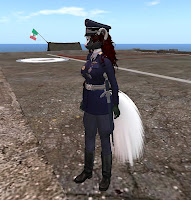 JessicaBelle was the pilot who told SL Newser about New Bastogne's WW2 Combat RP over two years ago. Since then, she developed a reputation for being a crack dive bomber and quality aircraft builder, helping to train pilots and help organize details. Vickster Khun got her start in the old RCAF air group, eventually creating the New Bastogne sim as part of the WW2 area that's become to be identified by it.

Earlier, there was some friction between the Luftwaffe and SS groups, when one of the stormtroopers abused his authority and ignored the orders of an officer from JG-52 to back down. The offender was later disciplined, and a reminder given to everyone they were supposed to be fighting as a team and have fun while doing so. Since then, the troubles have been largely forgotten, and the band of pilots flying on as before.

Lately there have been some special events with other combat groups which normally fight in other areas. On Thursday January 17th, the US Navy group set up an aircraft carrier in Bay Area next to New Bastogne and launched an arieal assault. Despite being outnumbered, JG-52 continued to fly into the furball. The Navy group claimed victory after a couple hours, though smaller skirmishes continued to be reported in group chatter.