Happy Australia Day at "The Pocket"

"Happy S'Traya Day!" That was the greeting people dropping by "The Pocket" got when they dropped by Friday night on January 25th. January 26 is "Australia Day," and with the time difference, the club's Aussie staff, singers, and regulars were already celebrating in real life and ready to take the fun to Second Life. 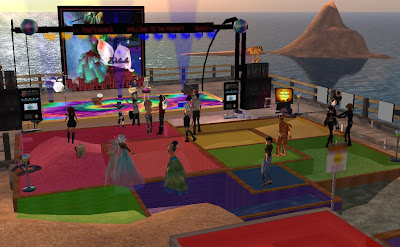 When I first got there, there were a few dozen people around, and the place was grey with lag to me. I took a club-wide picture later in the night after some people had left, presumably to real life holiday events. 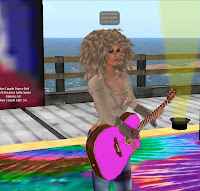 Several live singers performed for the night of the national holiday. Among them were OhMy Kidd, who performed on stage with "percussionist" Saraine Sands. Also on stage was Lexi Luan, whom sung while strumming her guitar strings.

As the day went on, so did the greetings of "Happy Australia Day," "Happy S'Traya Day," "Ozzie Day," "Oz Day," and more. There was a little joking around, one pretending to be confused, "So STraya day is Australia Day, right?" Someone also joked, "When *** has finished having my child she'll be right back, honest." Another quipped in response, "Hope it's a SL pregnancy, I can't keep this up for 8 more months! 8 weeks maybe (grin)."

For a couple people coming by the Pocket, it happened to be the anniversarries of when they came to the Grid, one saying, "Today is my Rez Day. OK, so it's not. It's A-DAY." "That means it's your UnRezz day" hostess Cellandra Zon joked in response.

A few unusual avatars showed up, including a tiny hedgehog, a steampunk "spider" avatar, and a kangaroo that hopped around for a bit before stopping to dance. It was a fun night for all.

"The Pocket" is at the eastern edge of the Fendahl sim, with a small part extending onto the Cassandra sim for busier nights. The sims are on the southern tip of the triangular-shaped mainland continent of Satori (also known as Malebaia or the Japanese continent). There are several live musicians, usually some or all of them Australian, performing every night at 8PM.