By Grease Coakes
At 10am SL Jackson Arthur at book Island he hosts his own event Office hours every Saturday. When I got back from real things he mentioned he was practicing micro fiction. Micro fiction is a whole story into 100 or 500 words. I said that’s easy to do as 500 words is a mere page. Then he said next week is supposed to be 100 words!
“What!" I said in voice chat “How the hell am I supposed to do that?” Jackson laughed at my response and he said he wondered the same thing. 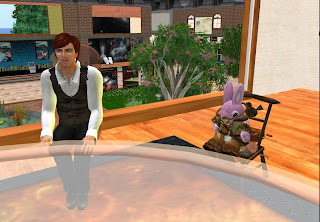 As Jackson was talking in voice chat other Book Islanders showed up like Danger Dave as a pink bunny Nicole and Olivia along with Silver and Relish. Wearing green I reminded everyone that St Patrick’s Day was tomorrow. Jackson Arthur said “Oh no! I don’t have anything green!” I saved his ham and I sent him a green shirt I made.

Jackson said today’s topic would be flash fiction. Relish was saying Micro 500 or less and flash is 1,000 or less. 100 or drabble fiction even Steven. Nano fiction is 55 exactly! Everyone agreed that writing so little would be a major challenge.
Jackson Arthur pointed out that only 5% of your time is writing and correcting your book as the rest is promoting your book which is very much the case. Tome wise it didn’t take long to type out my book but getting it published and continuing to promote that’s a pain in the butt and it takes a lot of time. 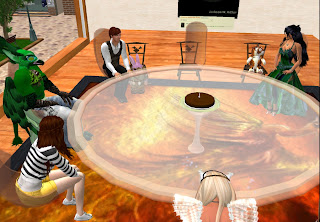 Cale came in saying she was late, but I said she was fashionably late.
Jackson Arthur asked “Is it better to promote your first book or write a second book?” I said I’d rather promote my first book then worry about a second book. Cale was talking about writing salons and live reading. I said myself I was looking to look for real life book stores to read my story at. Jackson and I both agree Facebook isn’t a good tool to sell my book.
Every was suggesting websites to promote their written works. I suggested promoting yourself around your local area is a big key too. Networking is the key everyone agreed to that to promote your writing.  Cale brought up how you could use photography in second life to create book covers. I said it wouldn’t work for my children’s book as a realistic virtual design wouldn’t really work. However for other books it may be just the ticket. She also said how she ran into someone who had a horrible cover picture for his book cover. Cale said she is a visual person as she is also an artist in real life. She told this rude person that his cover design was not going to work but he didn’t seem to listen. 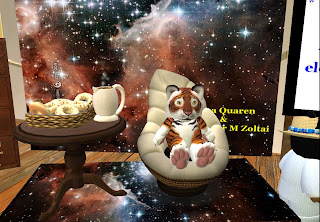 I walked over to the next event hosted by Relish the librarian who was a tiny tiger. He made me think of Hobbes from Calvin and Hobbes he was saying he collected dictionaries. For kicks I said I have some drum and bass records. And I asked everyone who wrote Mulder’s Theme? Nobody guessed so I told everyone Mulder. He asked did anyone want to get into a character’s head. I answered yes when I get purchased at a tail sale I want to get into my buyer’s head and make sure I get the character right for my buyer. Relish said I got it exactly right. I remember asking Dragon Heart what he wanted in his story and I’m not telling in this article.
Book Island seems like a great place to hang out and talk with aspiring or accomplished writers. The discussion seems laid back and laughs are always welcome along with gongs If you have any wish to see how other writers operate and you have a story you’re thinking about Book Island is the right place to go. I myself might try a micro fiction for kicks. It’s only 500 words anyway.
Grease Coakes
Posted by Bixyl Shuftan at 6:00 AM