News and Commentary: Relay For Life – Fashion For Life

What do you get when you mix some of the best builders in Second Life, some of the best fashion designers, and nine empty sims, donated by generous content creators? You get great things like the biggest charity event in the Relay for Life, male and female fashions of stunning quality and variety, thematic builds that challenge the limits of prim twisting and texturing. You also get blog sniping, sludge-like lag, and a little bit of greed. 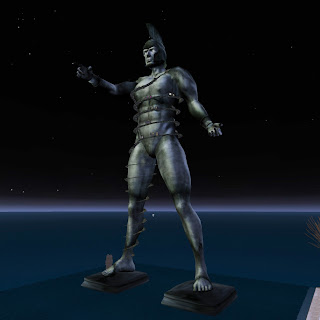 There will be a lot written about Fashion for Life, and I will provide links at the end of this article for you to learn more. What I want to do, is write an editiorial on Fashion for Life—the good, the bad, and the ugly. I spent a lot of time there…not going as a journalist, but as a regular resident. Although I have a very popular freebie blog, I never use this to get privileges, and I am proud of that. I experience events and sales same as anyone here, so I can know what it’s like.

The Fashion for Life sims are a wonder to explore. The theme is the Seven Wonders of the World with a different sim, and a different designer for almost all of them. The shops within the marvels are cunningly created to not detract from the scope and creativity of the builds. My favorite for creativity is the Colossus of Rhodes, which is, as it’s meant to be, a gigantic statue of Titan Helios. What’s most clever is that there is a path that runs along the outside of his body from toe to head. The stores are lined up within the statue, and phantom doors allow easy access. It’s fun to walk up and up and up, and pop into stores. The Colossus was built by Rebecca Bashley, and the sim was donated by EMO-tions. 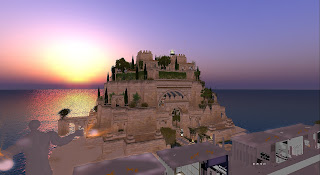 The Lighthouse at Alexandria has a completely identifiable look. Bryn Oh has lent her feathery and sad genius to the sim, and you walk through water to look at the shops that are in the open air. Come to see the build, and stay to buy some clothes.

The Hanging Gardens of Babylon were built by Patch Thibaud and are sponsored by one of my favorite stores: Tres Beau. They faithfully recreate the look of the gardens, and conceal the shops within, where I did find a few gifts and dollarbies, in addition to the goods for sale for the American Cancer Society. 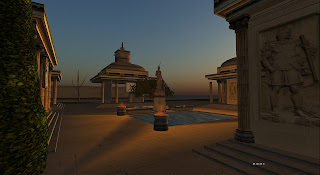 The Pyramid of Giza was both a wondrous and not so wondrous build. The flat colored pieces looked dated, but the psychedelic interior made up for this. The shops are tucked within the pyramid, and there didn’t seem to be many there. The pyramid was built by Thoth Jantzen and sponsored by Chop Zuey. I wanted to give this build a second chance, so I went back, and found many more stores, but I still think that the build is not as inspired as the others.

I am ashamed to admit I hadn’t heard of the Mausoleum at Halicarnassus which was built by Kaya Angel and sponsored by LAZURI, but I found the build to be wonderful, and it was the first I visited, and I was immediately entranced by the sculpted statues and temples all around. In retrospect the shops there seemed a bit bigger than the other sims. I wandered there with friends, and we found a lot to like, and a few things to buy. 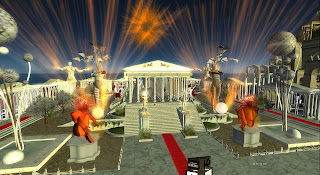 The Statue of Zeus at Olympia is yet another stunning structure, that beautifully complements the shops on the island. The build is by KarlinJames Zepp, and sponsored by Sonatta Morales *8* Vintage Couture. The build is done wisely, with half being devoted to the wonder, and the other half filled with market stalls that boast ceilings of hanging flowered vines. I really liked the way that looked. There is one huge shop there, and as you might guess it is the clothing of Sonatta Morales. I noticed over two million in sales at a vendor for a semi-transparent retro suit names Rose Garden.

The last wonder is the Temple of Artemis at Ephesus which was built by nexuno Thespian. Leri Miles Designs was the sponsor of the sim. This build is awash in white, with bright gold and red touches here and there. Some of my favorite designers are on this sim, and the shops are medium in size.

The other two sims are for events and gatherings, and they were built by Eshi Otawara, whom I thought was a clothing designer. I found lots of avatars on both of them admiring the spectacular build, but didn’t stick around.

Well, here is where is start to wonder out loud. The Fashion for Life event is a big deal every year. I usually don’t go, because I have enough clothes, often make my own clothes, and like to spend my Relay lindens on the convio and supporting the teams where I have been a member That said, I went and I shopped, and I kept a critical eye open to things. Here’s what I noticed: 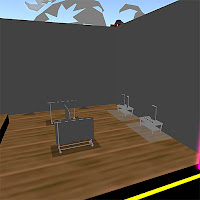 Yes, the builds are out of this world, and really thematically are both pleasing and educational, but how many prims were used on each sim to create these builds? I have a fast computer, and a fiber optic connection, but it took ten minutes for the Artemis in Ephisis sim to rez. Do you really think that folks wouldn’t come if the build wasn’t so phenomenal? I go to Relay events to support Relay. There are thousands of pretty sims to visit. I want to be able to move around and see what’s for sale. Please, please tell me if you think I am wrong. I wonder how folks with moderate to poor internet and computers fare at these events?

Second: Greed. I was about to purchase an outfit I loved at Indrya’s. Then I noticed it wasn’t in a Relay for Life vendor. I decided not to make the purchase. I started going from shop to shop covering once again the whole seven sims. In some shops there was one RFL vendor and the rest was a store for the creator!! I hadn’t realized this. When I have done events for Relay all my lindens went to RFL. Something just isn’t right here. It smells of using charity to increase personal sales, and that’s just disgusting in my opinion. Do the fashionistas raise a lot of money for the American Cancer Society? I am sure they do; I know they do, but put out some vendors and be done with it. Create a central location of just vendors, and let folks know they are donating to the American Cancer Society.

Once I realized that vendors were way scarcer than actual sales items, I started noting that the items I seemed to want—the new, the innovative—were not the items in the RFL vendors.

So, Fashion folks…please come after me. I will apologize if I am wrong about this, but I have a feeling I am not. Fashions for Life is a charity event that seems to have two charities: The American Cancer Society and the fashion business community in Second Life.

Anyway, go see the builds. Please, spend your lindens in the vendors, and Go Relay!!!!