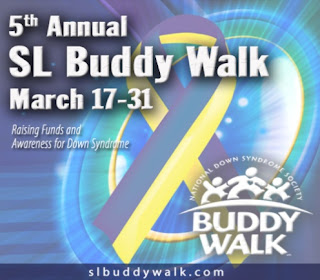 For the second half of March, the Buddy Walk Fair and Expo is taking place in Second Life. The Buddy Walk is a yearly event created to raise awareness of Down Syndrome, the most common chromosome abnormality in humans. The event is also to promote the acceptance and inclusion of people with the disorder. The condition is caused by a third copy of the 21st chromosome, and generally results in mental disabilities and other problems. About one in every 700 babies born in the United states is diagnosed with the condition.

According to a notecard from the event, the Buddy Walk was founded in 1995 by the National Down Syndrome Society. Seventeen events related to the Walk took place across the US. By 2008, there were more than 250 related events, including Second Life. This was the first year of the SL Buddy Walk, in which 170 residents attended, and 55,000 Lindens were raised. In 2012. over five hundred residents attended, and over 144,000 Lindens were donated for the event.

This year, the Buddy Walk is called the Buddy Walk Charity Fair and Expo, taking place over not a weekend, but over a two week period. Like last year, there are musicians performing at live events. With the addition of the charity fair, there are stores, "Each designer has made at least two items that the proceeds  will go directly to the walk." There is a walk pathway, but there is no scheduled walk for everyone. The notecard stated this was due to "the limitations and lag of SL" in addition to residents living in different time zones. 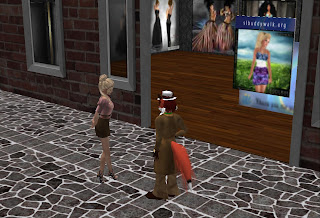 While paying a visit to the Expo near the end of opening day, I ran into Lilly Juno, the person to contact about information about the Buddy Walk. "This has been so great," she told me, "a lot of work, but love it. I worked hard to make sure we (had) a full house, and mo missing stores. … Designers help drive a lot of traffic."

Lilly told me they had raised 31,000 Lindens on the first day, "This event is so important. It's the first time we are doing it like an expo." She had been approached after the end of the 2012 Buddy Walk about the expo idea, "I told her I will do it id she didn't know how … I wanted to make sure we can get the awareness out there."  They had a number of musicians coming in to perform, such as Maximillion Klene and Edward Kyomoon.

Of the shops, "It's something very special to me to see so many great designers and some that step in when I need a few. I had a few designers that stepped in at the last minute to fill a few needed spots." All stores had at least two items in which 100% of the sales went to the walk, "Some are only doing two items, and then some are doing three, four, and six items. And then the rest of the store is 50% donations. And some stores are only (having) the donation vendors only. We only asked they make some of the vendors for donations."

Lilly added that there was an advertisement on SL TV for the Buddy Walk, on Pulse TV.

Lilly went on to say when the Buddy Walk for 2013 is finally done, she will be working for another event, "next month my event company is running the  Parkinson charity."

"There is much to say," Lilly told me of the Buddy Walk Expo, "so many have come together to make this event possible. When I was looking for designers, some people got some for me or IMed friends who knew some. They were all so great in helping me. This is my first huge event. I have hosted events before this, but nothing of this level, I am still learning. We would like to see feedback, and make this event better next year too."

"If you think about it, we are all the same in many ways, you, me, anyone. No matter what sex or race a person is, we all have feelings. We all have fears. We all have learning issues. Some are better at one thing or another, but we all can't be Beethoven. But we can stand up together to support what matters to each of us."