On Sunday afternoon, April 8, 2013, the "Sundreamers" Relay For Life team hosted a cancer fundraising event at New Bastogne. The sim is one of three for the WW2 Combat RP, where residents fight one another in tanks and planes in addition to small arms on several teams on two sides: Allied and Axis. Visitors are limited only to a small shopping area until they have joined the roleplay group for all players. Rules of protocol normally restrict how the two sides can interact other than shooting at one another, but on special events they can freely mingle. 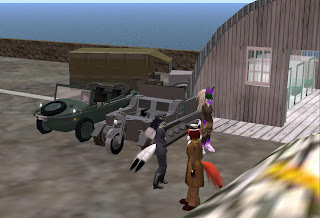 Such a special event took place last weekend, this time a Relay For Life event. New Bastogne has no team of it's own. The team that was there were the Sundreamers, the team made up mostly of residents of the Sunweaver Estates, and one of two teams made up of former members of the old "Passionate Redheads" team.


Relay for Life is the signature fundraising event of the American Cancer Society, and has been active in Second Life since 2006. Since then, RFL in SL has raised over US$1.6 million to help fight cancer!  Join us today in New Bastogne at 4PM SLT (PDT) for today's Relay for Life Event! This is a multi-team event, so if you wish to participate, feel free to join in. We will have dunk Tanks, where you get knocked down using WWII AA guns, theme music, fly WWII aircraft. Vendors. Costumes. Come have fun! 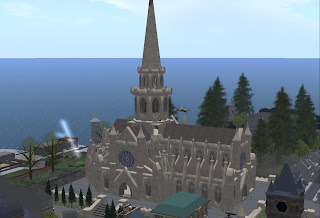 Dropping in, I was greeted by one of the Luftwaffe sergeants, and the Sundreamer leader, Rita Mariner. The purple kani was wearing a US Army uniform with a general's helmet. Most of the German teams were grouped together and chatting, but some were talking to visitors along with a few Allied players. Some residents were exploring the area. The church got complements on it's appearance and design. All the while, music of the era played from an old time music station from Portsmouth Virginia.

German leader and RP administrator, Vickster Khun, was among those chatting with visitors, dressed in a dress instead of a uniform. Visitors were invited to take planes up, and at one point one of the Germans took up a Heinkel two-engine bomber to give them something to shoot at. There were also tanks set up on the end up the airfield as ground targets. 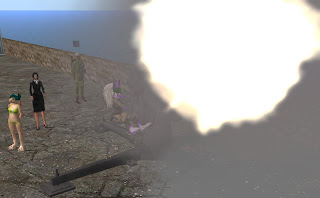 Becky Shamen was the first volunteer for the dunk tank, and she sat over it, in a bunnygirl avatar in a swimsuit and cap. There was a wire mesh around the tank, and the seat on one end of a beam that had a target on the other. Some distance away, the Sundreamer's RFL kiosk had been placed next to one of the 88 artillery guns. For a suggested donation of a hundred Lindens, people could take shots at her. Some did, but the first residents took some time to zero in and hit the target, sending Becky to a bath. Eventually Rita did, and got her with only a few shots. Then Vixie Valiant came in and took a seat on the gun when it was her turn. The vixen hit the target on the first shot, with reactions of surprise from those nearby, "Damn!" "One shot! ... I'm going hunting with you." "Nice going!" one GI commented, "We're gonna draft you for th' Allies!"

In was then Vixie's turn to sit on the dunk tank. And with that, the Sunweaver chat got more lively,"someone shoot that annoying vixen!." A few more Sundreamers came on to try to knock her in, and they were taking fewer shots than with Becky. Eventually, it was soon Rita's turn. And more residents came on to try to knock their landlord into the drink, who taunted, "No wonder the Germans lost, you can't hit anything." Just for fun, more weapons were brought in to knock her down, such as a small tank, and a Nebelwerfer infantry rocket launcher. 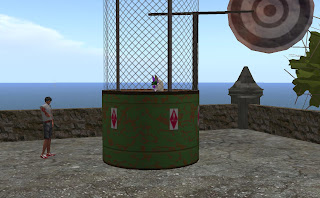 After about a couple hours, the event wound down. One of the Luftwaffe leaders, Jessicabelle Dayafter, suggested future events could be arranged. This time there could be drones that visitors could shoot down. And Rita soon agreed to an event next month.


Sunnies:  The Relay for Life Event yesterday was alot of fun. A lot of real estate was torn up as the gunners each took their turns blasting away at the victims on the Dunk Tank, until they hit them.  Planes were buzzing around and bombing and strafing the targets.  We are planning a second event, May 7th Tuesday, 4-6 pm slt. New Bastogne sim, WWII theme.


In the meantime, the Sundreamers and other teams continue to hold Relay events. And of course New Bastogne is always open to new players whom are team oriented and fight fairly.

For more Relay events, check their website at http://rflofsl.intuitwebsites.com/ .