On Easter weekend of March 30-31st, while many residents were busy with egg hunts, others spent their time at Relay For Life's first "Teams R Us" Weekend. In the temporary sims RFL TRU and RFL TRU 2, the Relay teams set up a number of camps with an overall Western theme. There were a number of activities and events for those passing by from shooting from fishing to bullring, and of course the Country Music Jam. 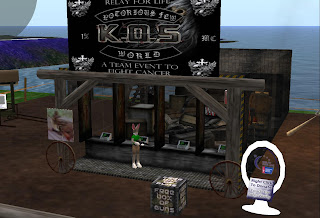 The camps were set up on a circular walkway around the two sims, the surface covered with musical notes. There were all kinds of country-themed appearances from corrals, to barns, to saloons, a giant chicken, and more. Dropping by the booths, there was plenty to do. One team's square offered a cornhole game. The object was to toss the provided beanbag into the hole three times. In real life, the game is tricky for yours truly, barely able to land a beanbag on the board, let alone get it in the hole. Somehow, after a number of tries I got just the right angle.

Another camp, possibly Team Live Wire, offered a shooting gallery. One could either take a gun from his/her inventory or get a copy of the provided box of guns. Once armed, one just had to press the start button and the targets would appear. In one pen, there was a mechanical bull. The object here was simple: get on and stay on as long as you could. But it was random as to how long you could stay. Sometimes it was a few seconds. Sometimes it was over half a minute. After several tries, I got on the scoreboard with forty seconds. 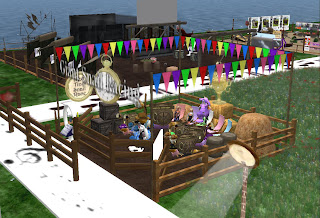 RacerX Gullwing's pen was for the Tiny Giant Snail Races. Every few hours during the day, those competing would get in snail avatars, and dash around the walkway the camps were set up around. The regular giant snail avatars were too big for this event, likely to run over and slime bystanders, so for this race one had to use "tiny" giant snails. There were Western-themed snail avatars one could get for a 500 Linden donation, but any tiny giant snail avatar would do. The course did have a few obstacles: patches of mushrooms that when stepped on would spring snails and other residents up in the air.

Yours truly took part in one race, and came out fourth out of five racers. The winner was Cathryn McMillian, with Safra Nitely second and Cinders Vale third. Safra had won another race I watched earlier. 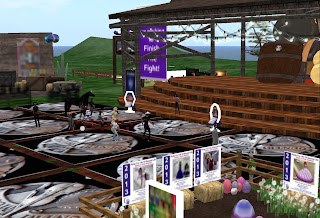 Team Cure Chasers had a kissing booth, though I never saw it manned. The Second Life Cheerleaders had a race car at their booth, which the team danced around in their pom-pons. There was a circus-themed booth, in which passers-by hopped onto the acrobatic swing. There was also a fishing event. And at the Wild West jail, there was a Jail and Bail.

The main event was the county music jam. At the center of the camps was a stage and dance floor. The floor had some line dance poseballs, and DJs and live singers would perform for the present crowd. Not all the tunes were country music. Dropping by once, I saw DJ Vic Morrington performing "Captain Morgan." 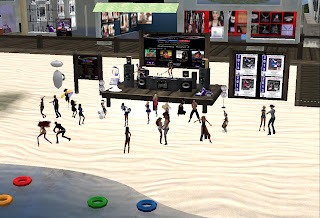 Outside the RFL TRU sims were other events. T1 Radio's Legends Classic Rock Club in Arinultra Cay hosted the "Relay For Life Top DJ Competition." Four DJs performed there that weekend, Stefen Thorne Saturday from 1-2 PM,  Fizban Underwood 2-3 PM,  Chaos Ktaba Hawker Sunday from 1-2, and Sasha Fairywren from 2-3 PM. I dropped in while DJ Chaos was performing. Within a half hour, she had raised 10,000 Lindens for the Relay Rockers, "10K Broken!" By 1:48 PM, 18,000 had been raised, "We can do it!" Three minutes later, "1000 more to 20k!" Finally a minute later, there were numerous cheers, "Maple and Ariel took us over 20k!!!" 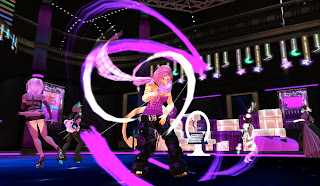 One Relay Team had it's first big event that weekend. Lomgren Small's Micro Madness, one of the two teams formed by former members of the old Passionate Redheads team, held a "Purple Event" at Furry Fashion, a sim-sized shopping mall run by Amethysia Crystal. Numerous avatars, numbering a few dozen much of the time, danced on the floor lit up to purple light, often wearing purple outfits and sometimes purple avatars. Besides Lomgren and Amethysia, Dwen Dooley and IshtarAngel Micheline were also there, in addition to Amethysia's longtime friend Fortunas Sands. There was also a contest for best in theme, which was one by yak Rain. Ishtar took a number of pictures of the event, which can be seen Here on her Flickr.

While Lomgren's team hasn't made Bronze status quite yet, the event did raise several thousand Lindens for them. The Giant Snail Relay team is up to 30,000 Lindens. Team Live Wire is over 57,000 L. The Second Life Cheerleading Squad hit Silver status with 110,000 L raised. The Cure Chasers are over 160,000 Lindens. The Relay Rockers have reached Gold rank with over 300,000 Lindens Raised. For the totals raised, Click Here.