The Bunny Paintball Fight, and other April 13-14 RFL Events

Last weekend, Saturday April 13th and Sunday April 14th, offered a number of events for the Relay For Life. There were numerous music parties. But with the large number of teams, there were happenings of all kinds. 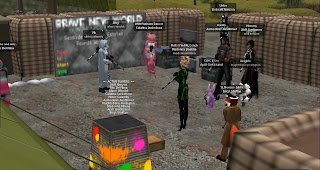 One of the more unique events was a paintball match on Saturday afternoon, in what came to be known as "Paintball, and Bunnehs." An announcement in the Relay chat went, "Its a serious business.  For serious people.  Yes, I said SERIOUS people.  Hence... TEAM ARCHANGEL BUNNEH!  Let's find a cure, meet interesting people... and SHOOT THEM!  LM Attached, we are visitors and giggling so hard... come join us!"

The paintball match took place in the "Hawk's Pride" MASH base in Seaside Treasures Estates. Paintball rifles were provided for free, with the request for a donation to the kiosk. After that, players touched the combat system post to get in the game, and one side was asked to chose red pellets and the other blue. Just for yucks, one side was sporting bunny suits. One picture was sent out in a group notice, with the caption, "Look out. They may be cute, but they're pretty good shots!" 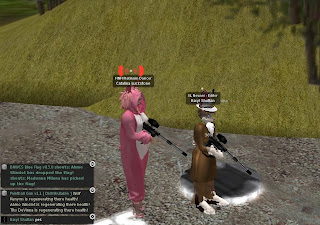 There were multiple rounds of paintball that afternoon, this reporter having took part in two. It was fast and furious action, with numerous paintball splatters. If one got hit with too many too soon, he or she couldn't fire again until touching the post again. To win a round, one had to touch the opposing flag and drag it to his own base location. Easier spoken than done as doing so made you a first priority target to the opposition.

There was quite a bit of joking around as well. There were a couple good-natured barbs of the tiny avatars "cheating" by being smaller targets, as well as chuckles that the rainbow-colored bunny outfits were making those who wore them a magnet for attention, and pellets. At the end, people wished each other well, and went on to other events. 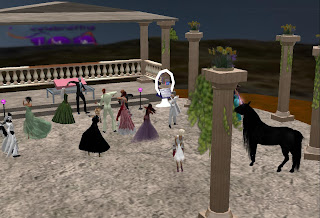 Another event was the "Formal Birthday Ball," held from 3PM to 7PM on Satuday April 13th. The music was provided by DJ Aryon. Aryon Dagger had faced cancer surgery earlier this year, in addition to being the subject of a fundraiser for a better computer when her funds were a bit short. Among the others there were Bain and Panza Finch, Gem Sunkiller, Avariel Falcon, and Madonna Daehile. Madonna, known for her trademark shiny latex outfits, wore a dress this time for the occasion.

Aryon had a few stories, among them a conversation between two doctors. One commented he was using the same drugs at the same doses as the other, but the other guy was getting a response rate more than twice his. The doc answered when talking to the patients about the drugs, he would use the first letter of each medication, H, O, P, E, "I'm giving them hope." 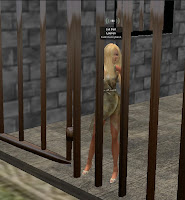 The following day on Sunday, the events continued. One was a Jail and Bail held by the "Relay Wizards for SpUnKy." Noted comedian Lauren Weyland, known for her weekly comedy show, was the voulenteer. Tossed into the slammer for failing to get laughs from a tough crowd, bail was set at 35,000 Lindens. The money was made in just 41 minutes, but the Lindens kept coming. The amount raised that day was over 36,000.

Other events included Team "Unmasking a Cure" holding a 24 hour music event with several DJs. RacerX Gullwing held a few tiny snail races with a Woodstock theme, and had "hippie" tiny snails up for sale for charity. Music Races for a Cure held an Art Fair and Auction.

It was an eventful weekend for the Relay. But there soon would be more to come. As of the posting of this article, the Fantasy Faire begins. So residents can head on over for some more Relay fun.