Last weekend, the Burn2 festival came to a close with two events: the Burning of "The Man," and the Temple Burn. The latter took place on the last day of events for the festival, on October 27. The event took place three times, 4AM SL time for the "European" burn, Noon for those on US Eastern Time, and 8PM for those on the US West Coast and Pacific. Gemma Cleanslate was able to catch the Noon Burn, and took a few pictures. 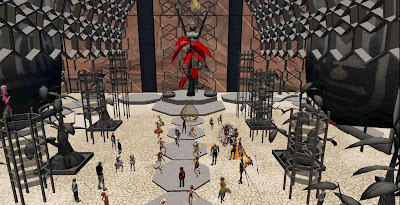 On some Burns, the sim is cleared of people with a restart before each burning. It wasn't the case this year, and people remained inside as minutes ticked away for the temple. 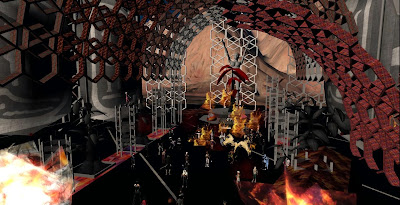 And at Noon Second Life time, the fire begins. 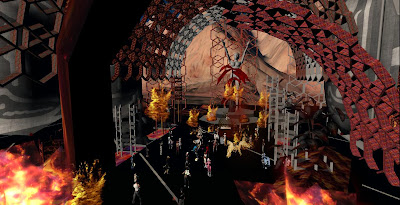 In real life, anyone caught in a burning building would panic and flee. Not necessarily so in virtual reality. And certainly not at Burn2. 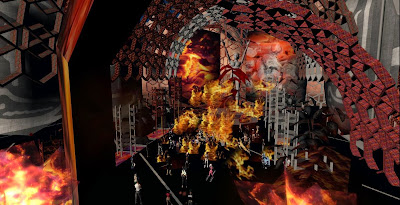 It isn't long before the interior was soon ablaze. 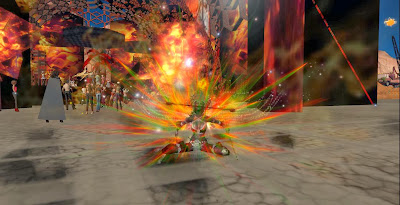 One of the Burners, glowing brightly. 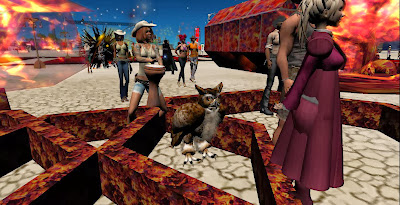 Gemma wasn't the only writer at the Temple Burn. Daniel Voyager, noted for his blog, was also there.

Radioactive Rosca was able to film the Temple Burn (Click Here is video fails to load).

Gemma was hard at work at the festival, so wasn't able to write much. She did write a review of Ub Yifu's exhibit. Gemma's partner Qwark enjoyed the burnings of "The Man" and the Temple, though thought that they were better in previous years as clearing out the places meant less lag. Daniel Voyager wrote his own review of this year's Burn2, calling it a success, " I’m glad there is still interest for the annual BURN2 event in Second Life after Linden Lab stopped funding it back in 2010. I do think more needs to done to get the word out to more people on the grid to let them know of this well known event." With interest in alternative Grids growing, he suggested perhaps the Burners might see what they could do outside Second Life.

And so another Burn2 comes to a close. Next week, the sims are cleared of builds, and like the desert location in real life, no trace will be left.

Posted by Bixyl Shuftan at 6:30 AM