On Sunday March 30, noted longtime Second Life resident passed away. He was noted for being many things here, land owner, mentor, and a tireless advocate of this virtual world. Last weekend on Saturday April 5, a memorial service was held in his honor in the Linden Memorial Park area. 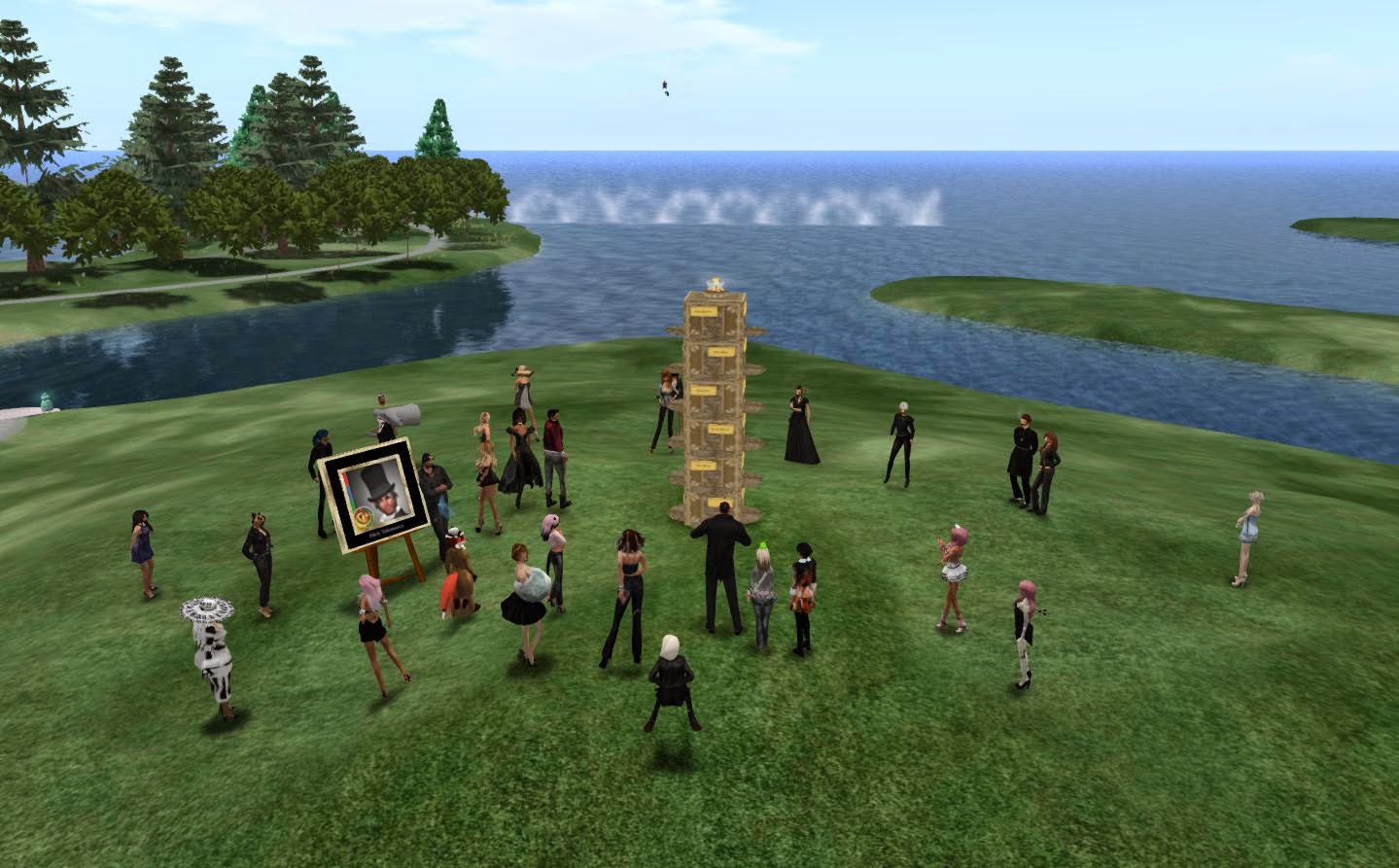 The service was scheduled for 4 PM SL time in the Pinechapel sim, though there seemed to be technical difficulties due to the number of avatars present when I arrived as I kept crashing. One resident commented, "Dirk touched so many lives. The fact that we keep crashing is a testament to who Dirk was." It was decided to move the service to the southwest corner of monument where it was within earshot of three other sims. This way, more could attend with less problems of a crash.

Dozens attended the service. Among them were Saffia Widdershins, Stroker Serpentine, Jessica Lyon, Marianne McCann, Codebastard Redgrave, whom a few years ago had set up a tribute to a third of the Lindens whom had suddenly been dismissed from the Lab, Inara Pey, Crap Mariner, and even a Linden: Shaman Linden.

Jessica Lyon had this to say about the multitude present, "Seeing a lot of familiar names in here. Strange thing that, how the loss of someone loved brings so many together." Shaman Linden remarked, "I didn't know Dirk, but I am intrigued and touched that he had such a presence inworld to bring us all here. The ones who knew him, and the ones who didn't, alike. ...  I'm sure many Lindens who knew him are sad to see him go." 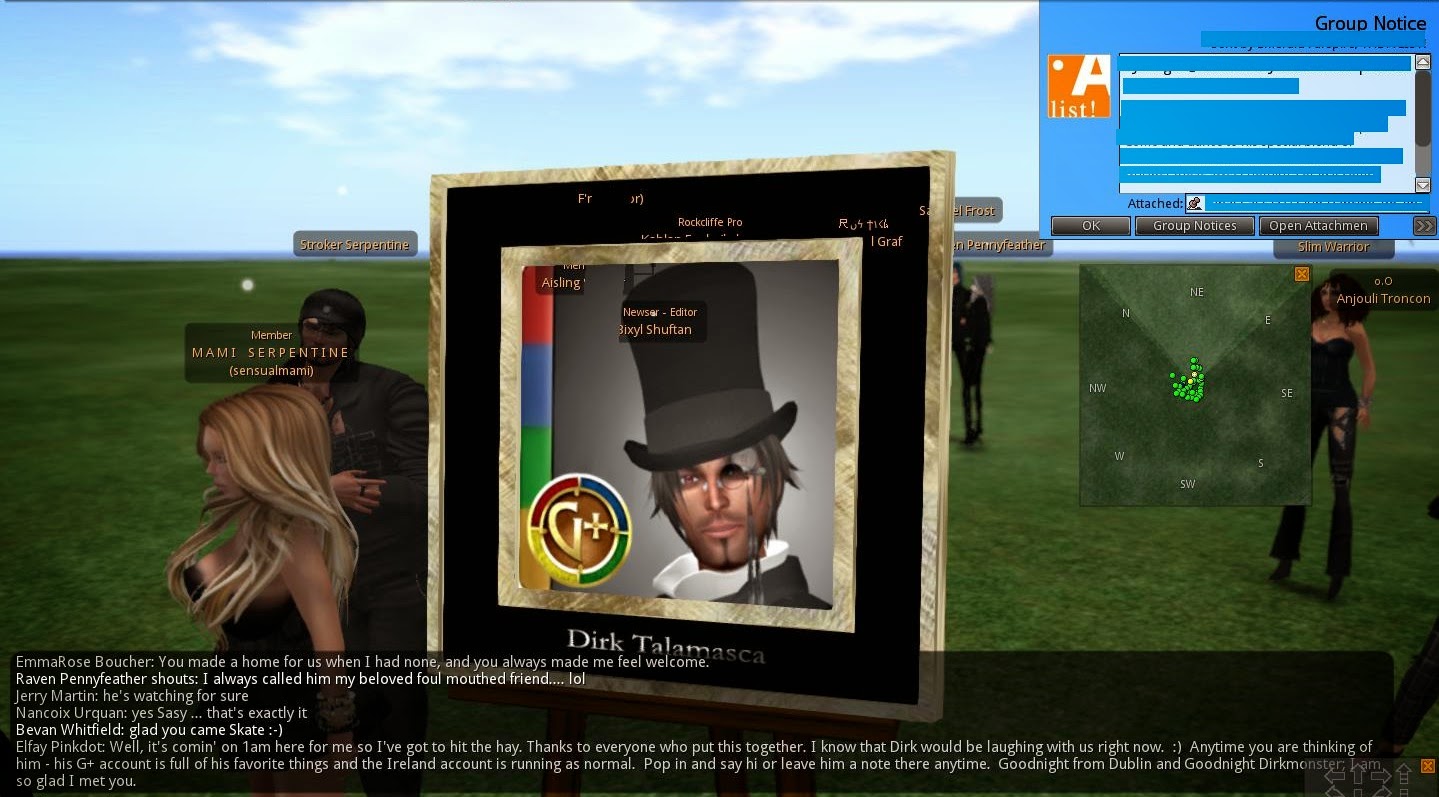 It was commented, "Dirk would be honored to see the turnout here today - was said so far." "Dirk would be laughing, than ask why he wasn't invited too." Saffia Widdershins added,  "That's the trouble with wakes - they throw a great party on the one day they know you can't make it!" Jessica commented on his reputation for being playful with the ladies, Jessica Lyon: "I can't help but wonder how many women here today... he tried to get naked, haha!" "So true Jessica, hehehe. ... Oh he was good with the blarney as well." "Always a gentleman, yes, "Jessica Lyon, confirmed, "always the charmer." "It was the top hat that got us girls." "Probably sweating bullets now thinking 'Oh God, they're gonna find out about each other!' " "Pffft, he's hoping that's what we're talking about and laughing his a$$ off." Stroker Serpentine wryly commented, "He would always volunteer to be a product tester for me." "And all the ladies comparing notes, he would by hysterical by now." 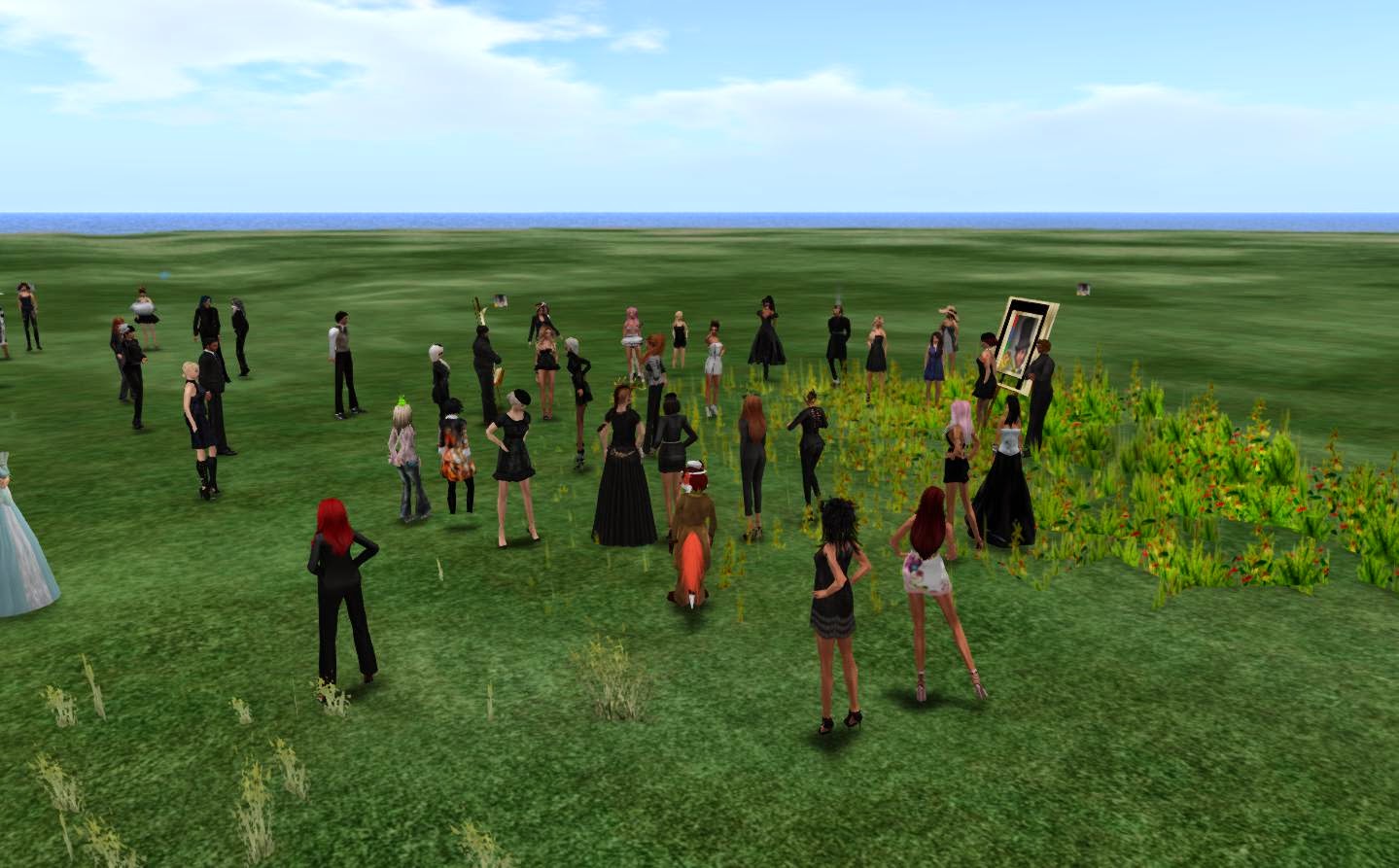 But the chuckles faded when talk turned to one thing Dirk left behind, his sims, "I hear the sims are being reclaimed as we speak. It was my home for so long it makes me want to cry." "Starax went offline and I ticketed it and they brought it back up so I could get my stuff." "We offered to buy two of them, but (the Lab) wouldn't do it.) Codebastard commented, "Yeah that's one thing that's hard with virtual worlds. Sims costs a sh*tload, and when you pass away they are recycled. There's no eternity in here." People talked about getting in touch with Dirk's family about the sims, but later on after they had time to griev, "The family is aware of the Linden Lab TOS and will deal with it early in the week. Let's just let them mourn today after his funeral this morning." 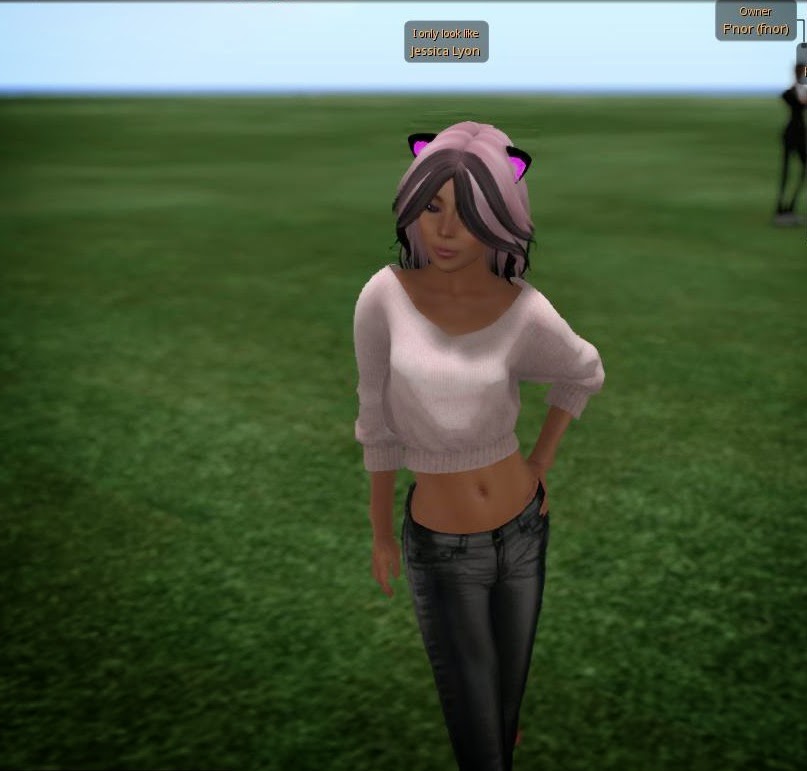 "Well Dirk, my friend, I am glad that I met you. I'm glad that we made each other laugh. I'm glad you never got my clothes off. And most of all, I'm going to miss you very much. RIP babe." "I loved that he just seemed to really 'Get' Second Life. He saw it for what it could be from the beginning and always urged others to see it that way too, that was my experience with him anyway." "I have this image of him doing the "pull my finger" joke when he meets Jesus. I cant stop grinning about it." "No matter what life he's playing on , I'll catch up with him one of these days." "And not one last prank by Dirk. Last time I heard ticking in SL was when Dirk sicked a herd of buffalo on me." "Dirk was the only estate owner ive ever had that could get Lindens on my sim in 5 mins." "He helped so much with the horrible ordeal with my ex, said Baby, 'any man stupid enough to let you go deserves the sh*t he is dealing with.'" CodeBastard Redgrave, "I ragedfaced so much at LL at the time and he was like, 'don't bother Codie, you know they are just idiots.' That always made me laugh out loud, and I stopped being pissed."

Over time, people had to head out. Stroker Serpentine, "I will always have the laughs and smiles..R.I.P. Dirk..Busty Wenchs and Cold Ale FTW!!" Jessica Lyon, "well.. Dirk.. my dear.. you charmer you... You shall exist in SL forever, you've touched so many, loved by so many, have made so much difference over the years to so many including myself.. You can never be forgotten. You will always be part of the grain which makes SL what it is and I will always think of you this day forward every time I click Login. And yes, you can slap my a$$ one last time."

Eventually, there were just a few left, which Codebastard invited to continue the chat at her Rouge Lounge.

After the service, I was contacted by Bevan Whitfield. She told me Designing Worlds would be taping a special episode about Dirk Talmasca on Thursday to be aired later this month. She also passed to be a recording of the wake (www.twitch.tv/neddings/c/4018059).

And so, Second Life bade farewell to one of it's own.