On Wednesday September 3rd, Team Firestorm celebrated their fourth anniversary. High above the Phoenix Firestorm Support region sim, the team alongside friends and well-wishers partied and danced to a little music, as well as discussing goings on past and present.

Team Firestorm had it's orgins with Second Life's first popular third-party viewer, the Emerald Viewer, which Second Life residents began using rather than Linden Lab's reviled Viewer 2 which many found difficult to use. But in August 2010, Team Emerald fell under scrutiny when some members launched a Denial of Service attack against a rival's website. Linden Lab soon demanded the resignation of three key members, and there was soon a split in the team, the breakaway faction led by Jessica Lyon. Quickly christened Team Phoenix, they and their Phoenix viewer quickly won over the support and respect of Second Life's residents as the last of Team Emerald faded away from Second Life. But as time went on, they developed a second viewer, Firestorm, which resembled the official viewer somewhat but was still easier to use, as well as fully mesh capable. But working on two viewers was just too much for the team of volunteers. In December 2012, support for the old Phoenix viewer was stopped, and the team concentrated on the Firestorm viewer. For the event, there were a couple of gifts available for well-wishers. One was an old style motorbike commissioned by Desert Morning Motors, made in the style of motorcycles manufactured between the Depression and the 1960s. The other was a commemorative pet kitty from KittyCats, the Firebell. The cat requires no food and doesn't reproduce, "The FireBall kitty comes with a party hat, engraved collar and cute matching bed! You can even hold it, play with it and have it walk around with you!" 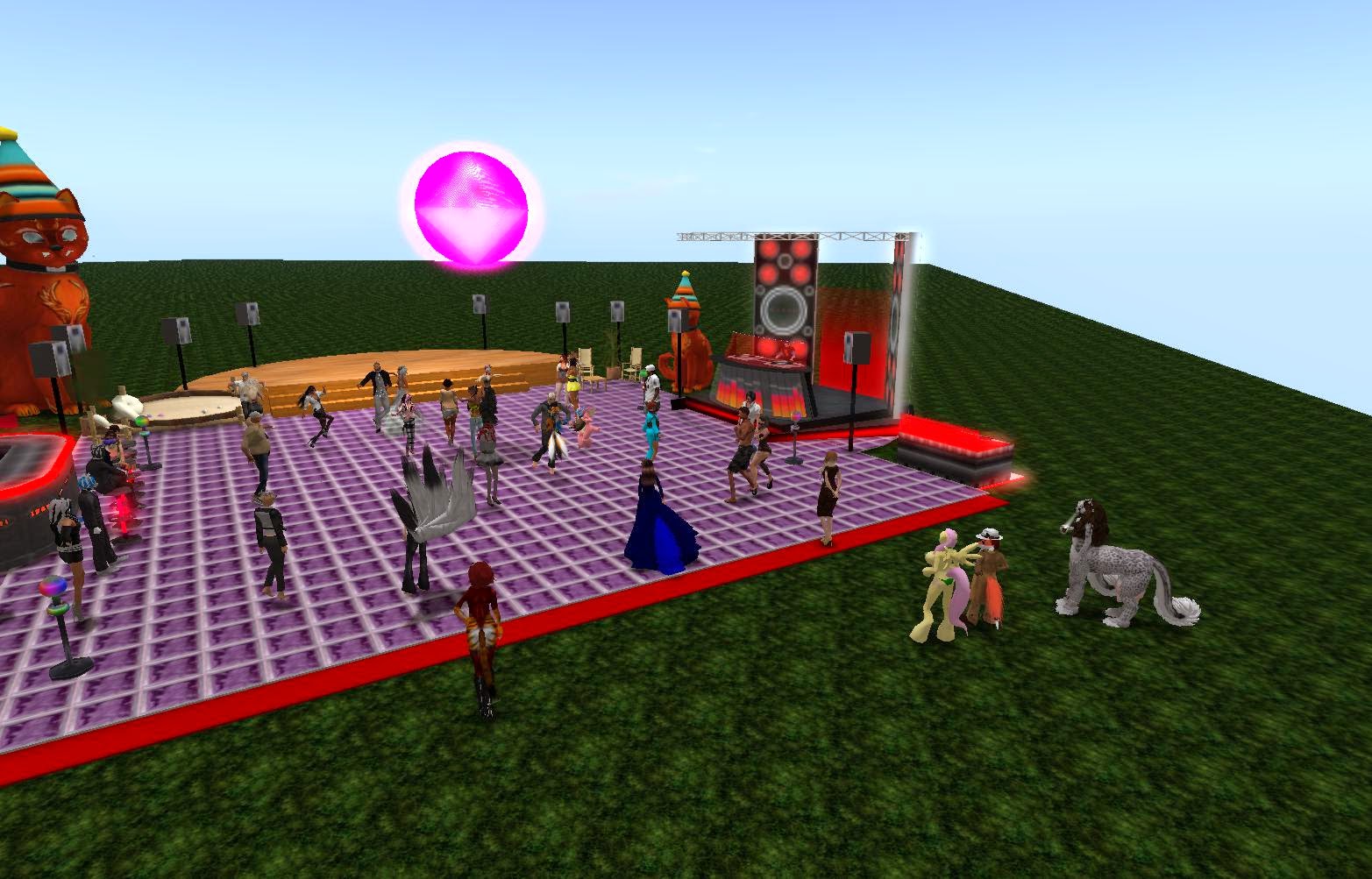 There were between two and three dozen at the party, including well-wishers such as Daniel Voyager, and noted Firestormers such as Tonya Souther, the head of the Apple viewer team, and Chakat Northspring, whom had an ARC meter on her back. And of course there was team leader Jessica Lyon.

Jessica stated she was willing to answer questions via instant message, so I asked her a few.

"Since the beginning Jessica," I asked, "what have been Team Firestorm's most notable challenges?"

Jessica's response was, "Ha ha! Sanity! And also managing not to kill each other ... things have been interesting for sure. (laughter)"

"I recall the team's decision to halt the updates on the Phoenix viewer," I brought up, "I think you stated it was becoming too much work for your team of volunteers."

"It really would have been tough," she answered, "And the team was very divided on the whole thing as well."

"How well was the public reaction??

She responded at first with laughter, "Ha-ha!" followed by a pause, then, "Not so good. Well, Firestorm users were happy. Phoenix users, not so much."

"Did most accept your explanation for the decision?" I asked. 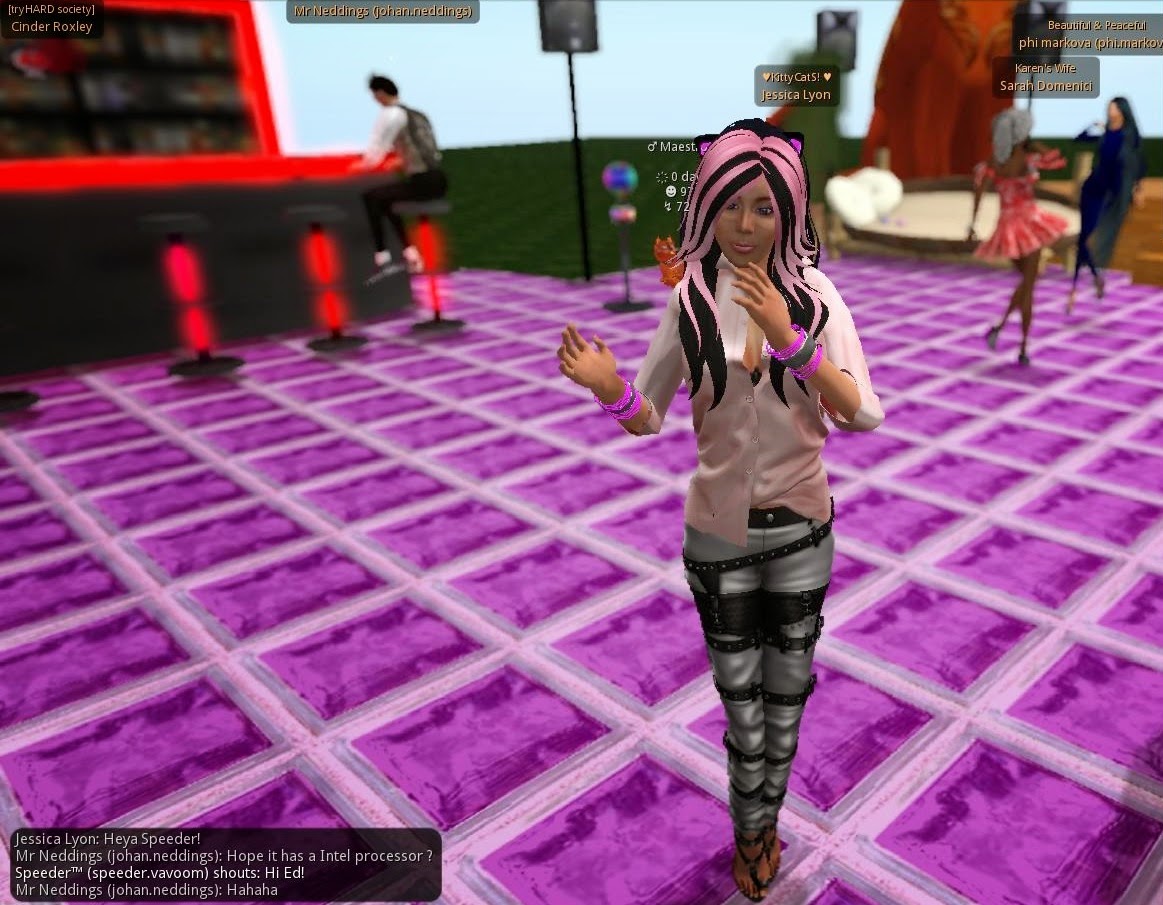 "Not so much either," she briefly laughed, then her tone became less cheerful momentarily, "But folks just aren't able to understand the complexities of what we have to do, and would have had to do to keep Phoenix going. But," she brightened, "Singularity managed to keep the V1 (design) going, and I'm really actually glad for that. And impressed too, they proved me wrong. I like very much that folks have that option though."

I then asked, "Did most Phoenix users eventually move on to Firestorm?"

"By a longshot," Jessica answered, "No viewer has ever had such a high user share than Firestorm does. It is really the change that people hate. Folks hate change. Totally human that is too. Can't hold that against folks."

And just how big is Firestorm? Jessica told me, "We carry in the neighborhood of 3/4 of the user base. But the conditions LL holds us to for getting statistics from them is that we don't divulge actual numbers because it might cause others to be upset with their own numbers. In other words, I don't think they want folks to know the actual percentages," she laughed a bit, "Though Oz has stated publicly some time ago LL has about (an) 11% user share. So that can be said."

"So now that the team is now four years old, what are your plans?" I asked.

"You remember the last April Fools joke that wasn't actually a joke?" she responded, "We did the Firestorm DUI, detachable panels and such, that can be moved outside the viewer window constraints. And it turned out it was real." She chuckled, "Oh man, it was epic. The year before I did firestorm Mobile as a joke. ... Then I did Firestorm DUI... and you'll see the video was made in such a way that it must be a joke.  But actually it wasn't. I revealed a few days later that we had actually in fact accomplished moving floater panels outside the viewer window."

"Now.. the point of me bringing this up.. is because it ties in with what is next. But I can't tell you directly because it's uber secret, has to be a surprise. But, there is a pattern," she laughed again, "But for now, stuff you can talk about, mirrors." 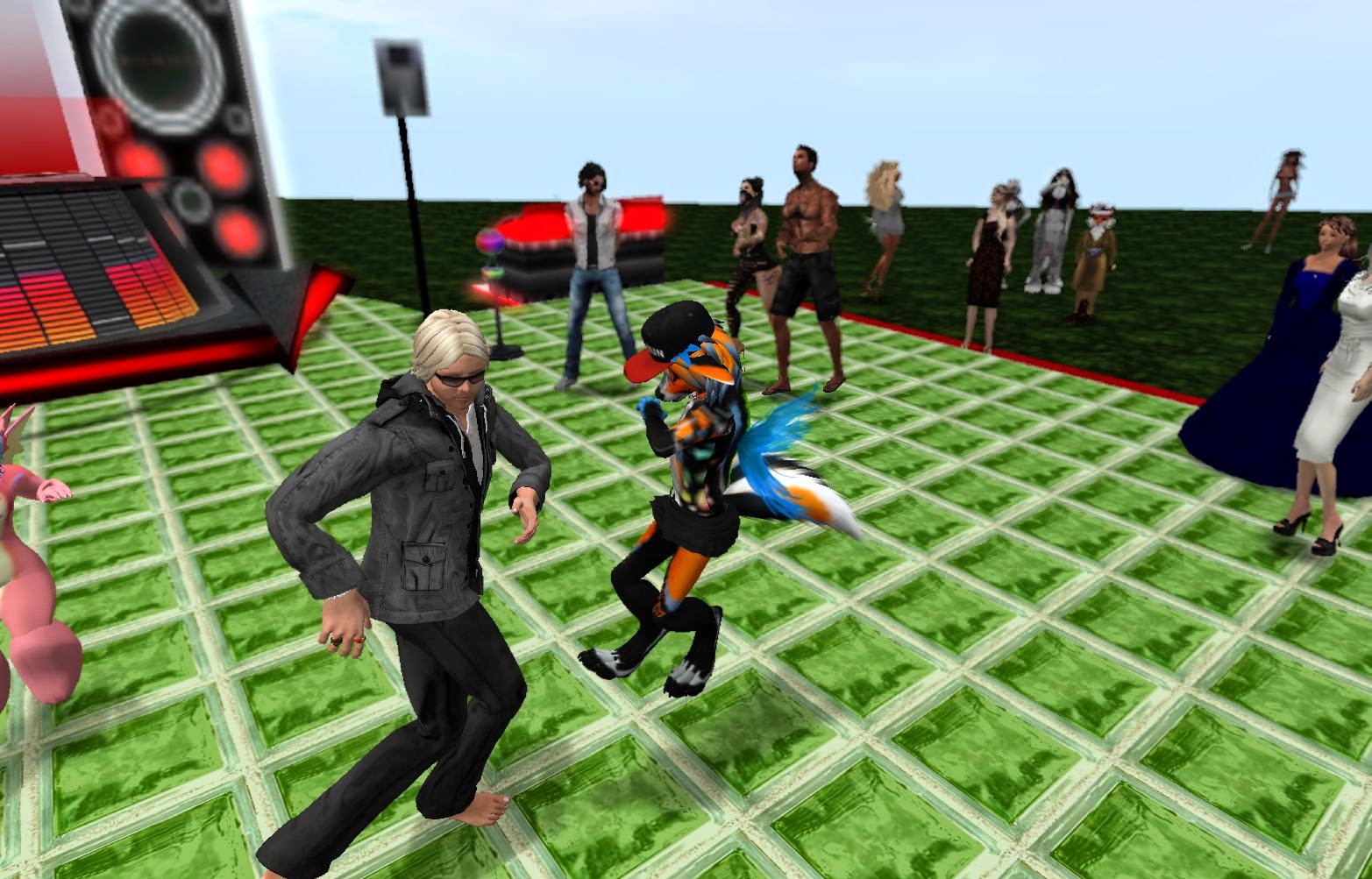 "Mirrored surfaces, like on polished black marble, and of course mirrors, in the Firestorm viewer?" I asked.

Jessica sent me the link of an Aug 6 article on the subject by Inara Pey, "The problem is, because it falls into the 'shared user experience' condition of the third party viewer policy the only way we can move forward on it is if LL accepts it in their viewer and releases it first. So we're pushing (them) to take the contribution."

The party itself went on from 1PM to past 4PM. In the first hour, Seth Regan/Mandkind Tracer sung live for the audience. After that Ed Merryman played some tunes as the DJ.