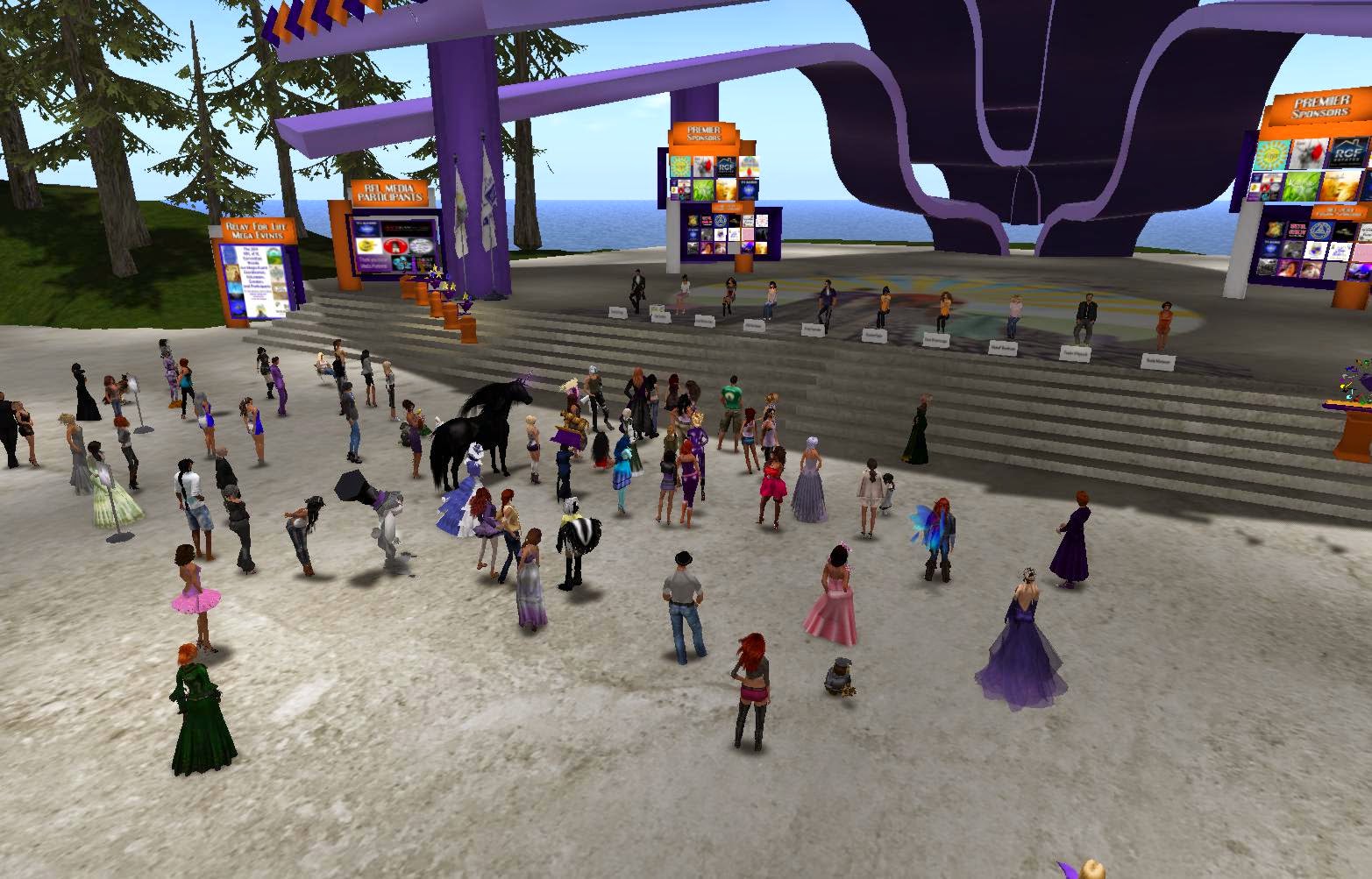 Sunday August 31st marked the official end of the Relay for Life season in Second Life. Since March 7, the Relayers have had numerous events raising funds for the American Cancer Society, and having fun doing so. The season's peak, and the second to last big event was the Relay Weekend on July 19 and July 20, after which most teams ceased activity or held just one more event. Finally at 10 AM Sunday, the Relayers came together for the last time for the 2014 season. 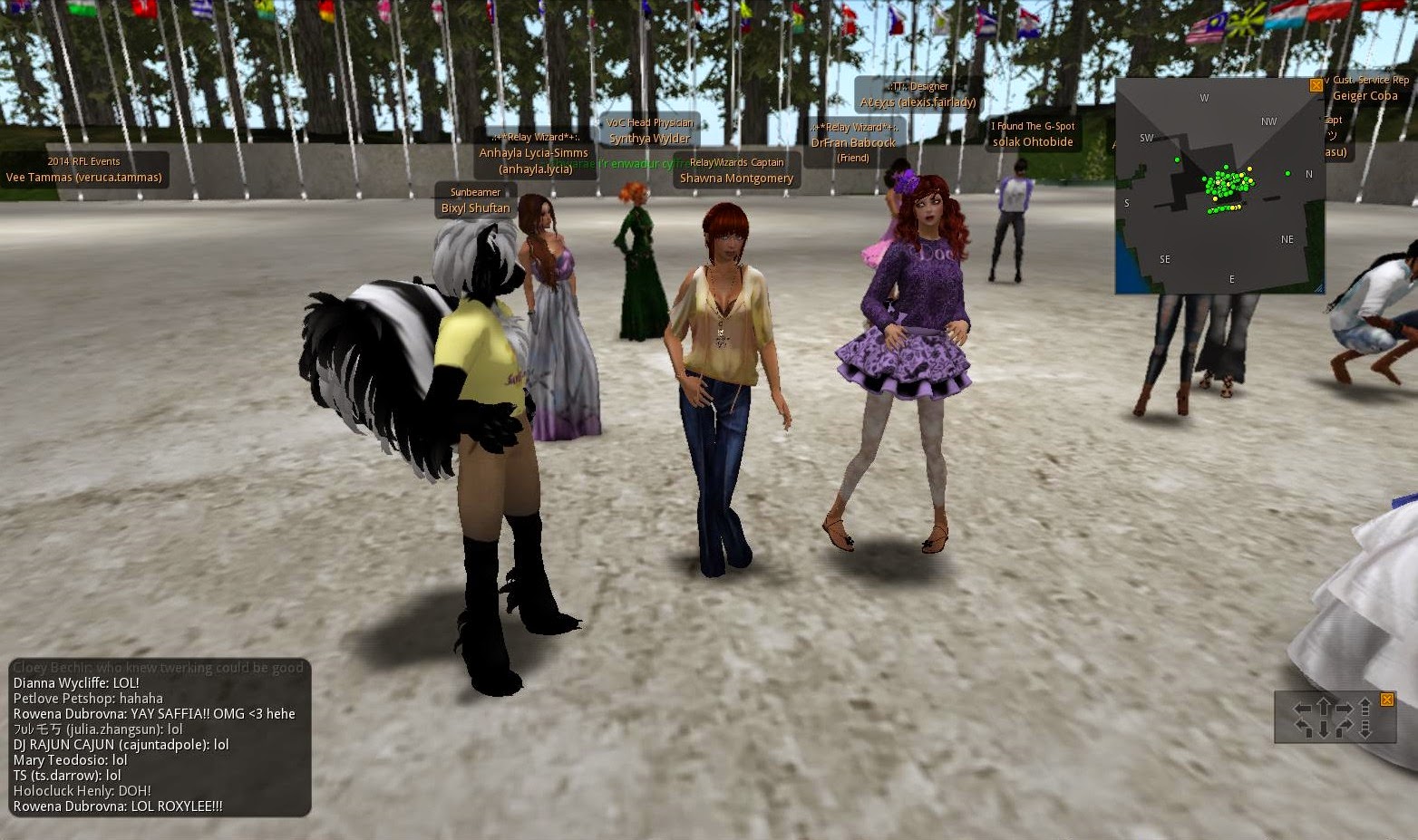 Unlike the Relay Weekend, not so much grey showed up in my pictures, so I was able take clearer ones. This was despite the more than 45 avatars present, according to Daniel Voyager. I was in my skunk avatar, as both a tribute to "Stinky the Skunk" and a reminder of the "Bid Me" events my team the Sunbeamers did. Dr Fran Babcock was there along with her team captain Shawna Montgomery of the Relay Wizards.

On stage was the Relay Committee, speaking to the crowd over the radio. They gave their congratulations for a job well done, and announced various awards. And there was reason for congratulations. A whopping $415,422 US dollars had been raised. This amount made the Relay for Life in Second Life not only the top charity in Second Life, but a leading one worldwide. 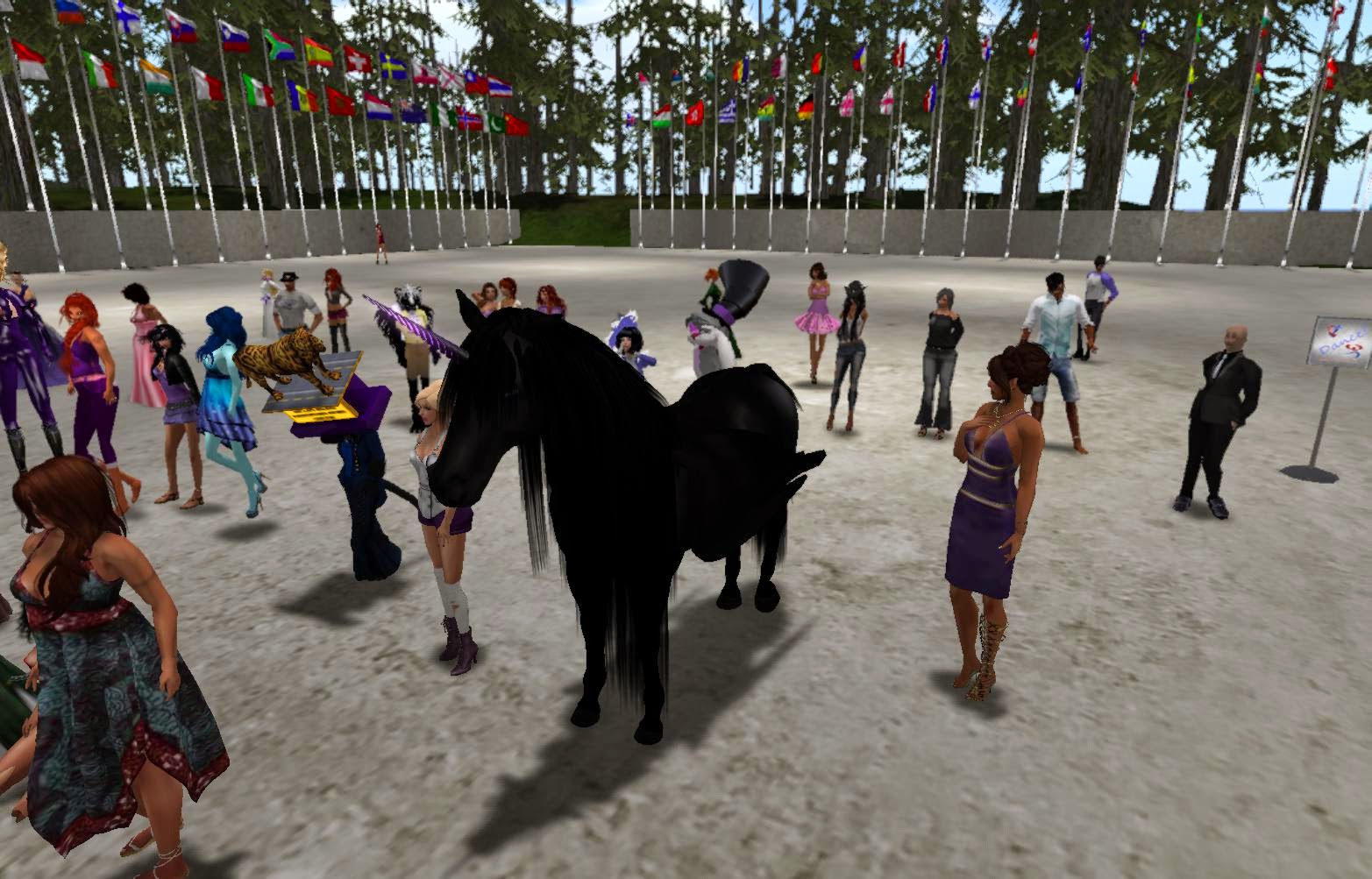 Of the awards, there were many.

3rd Place--Unmasking a Cure, placing second with the number of team members registered (15), along with an average of 5 gifts per email.
2nd Place--Harmony of Hope, registering the most team members (20) and sending the second highest number of emails (59) 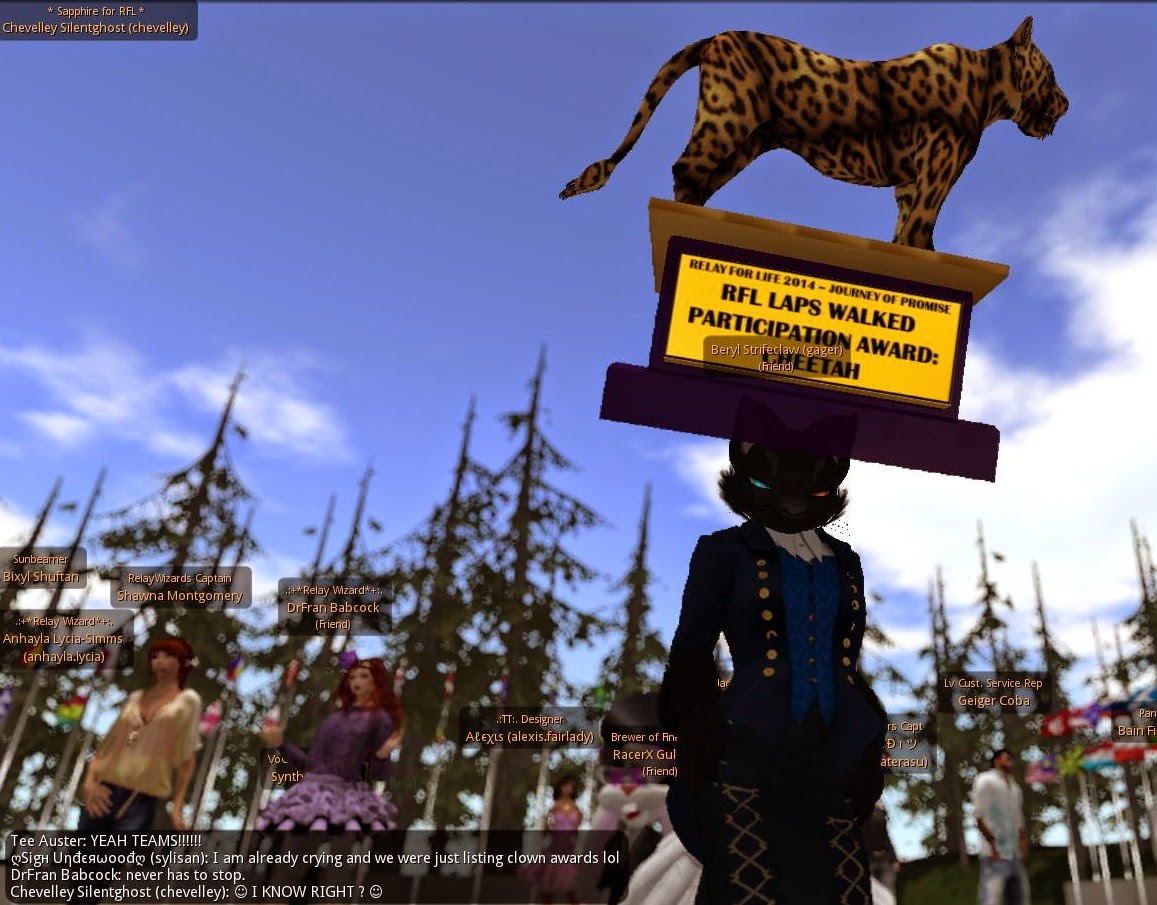 Finally the theme for next year was announced: "The Future is Now." 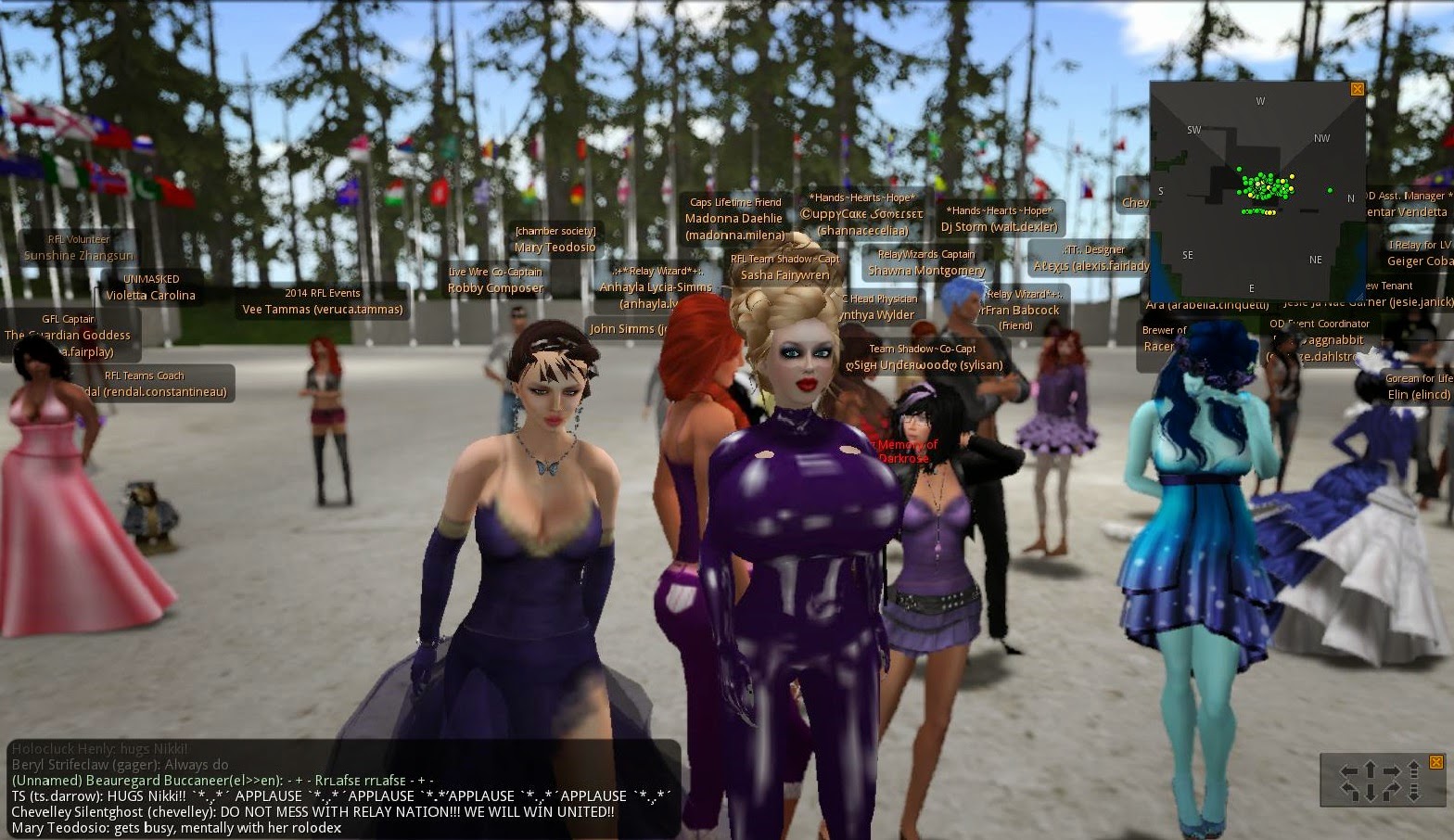 Following the announcements, there was music and dance. At 11:30 AM Singer Max Kleene performed live for the crowd, and at 12:30PM, Trader Whiplash DJed a set of tunes.

And so another Relay season had come to a close. But in the next few months there will be other cancer fundraisers, such as "Making Strides Against Breast Cancer Across Second Life," "Relay for Life in InWorldz," and the "Xmas Expo and Breedables Fair." And of course the Relayers anxiously await March 7, 2015, when the next Relay for Life season begins.