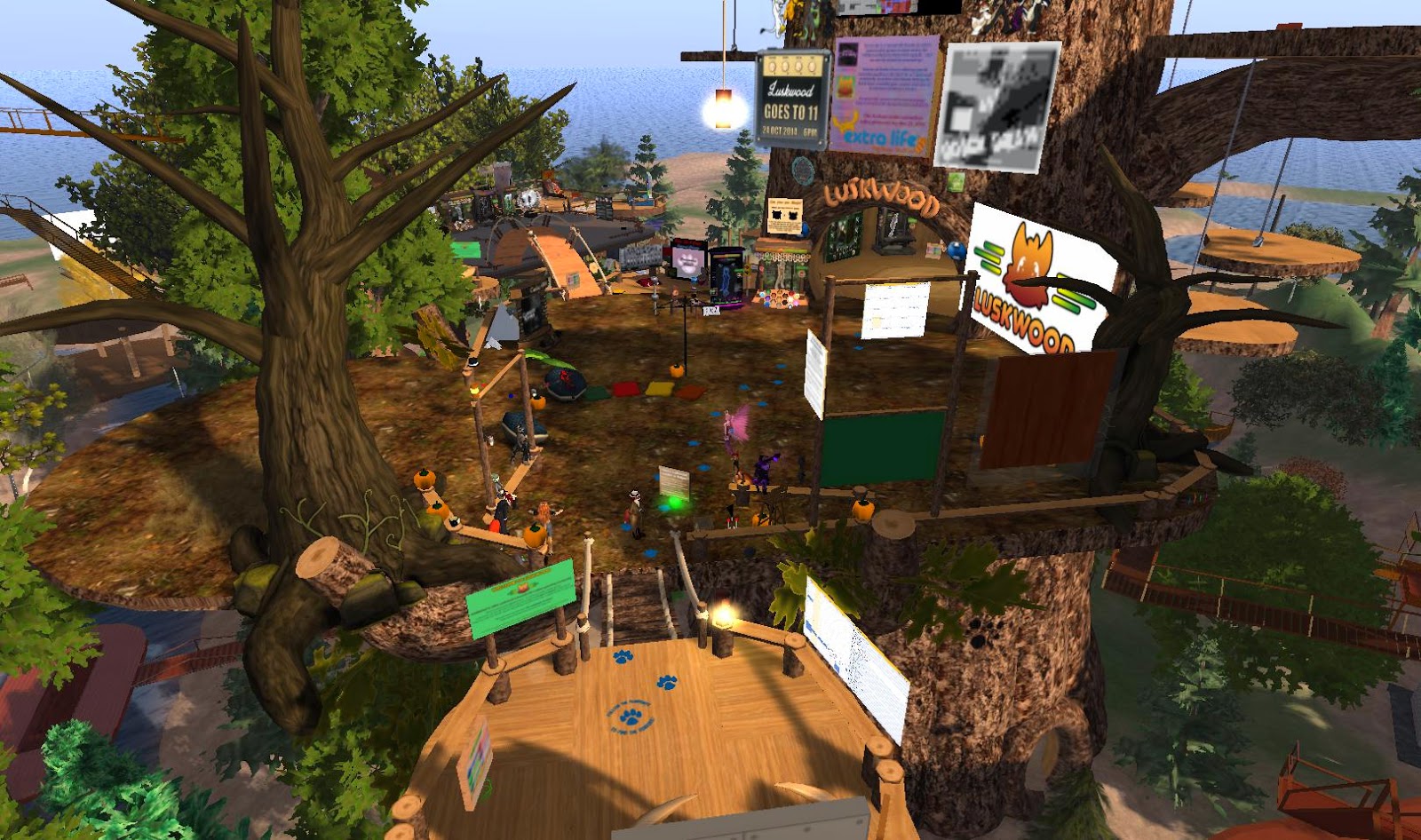 On Friday October 24 and Saturday October 25, Luskwood held it's anniversary event. As a community, Luskwood stands out in a number of ways. Not only is it the oldest furry community in Second Life, it's the oldest community that's still active of any kind, period. As the first makers of furry avatars, they pioneered the method of mass sales of them. Unlike many furry communities, they make their home on the mainland, just east of Ahern which is the first stop after the welcome areas for many new residents, and several sims east of the Bay City area. The contact with residents preferring human avatars has helped them become the most recognized and familiar of furry groups and places. Unfortunately, it's also made them the target for griefer attacks at times over the years, notably in their early and middle years in which some griefer groups made it their mission to target and harrass furs. But Luskwood has persevered through these and other problems. 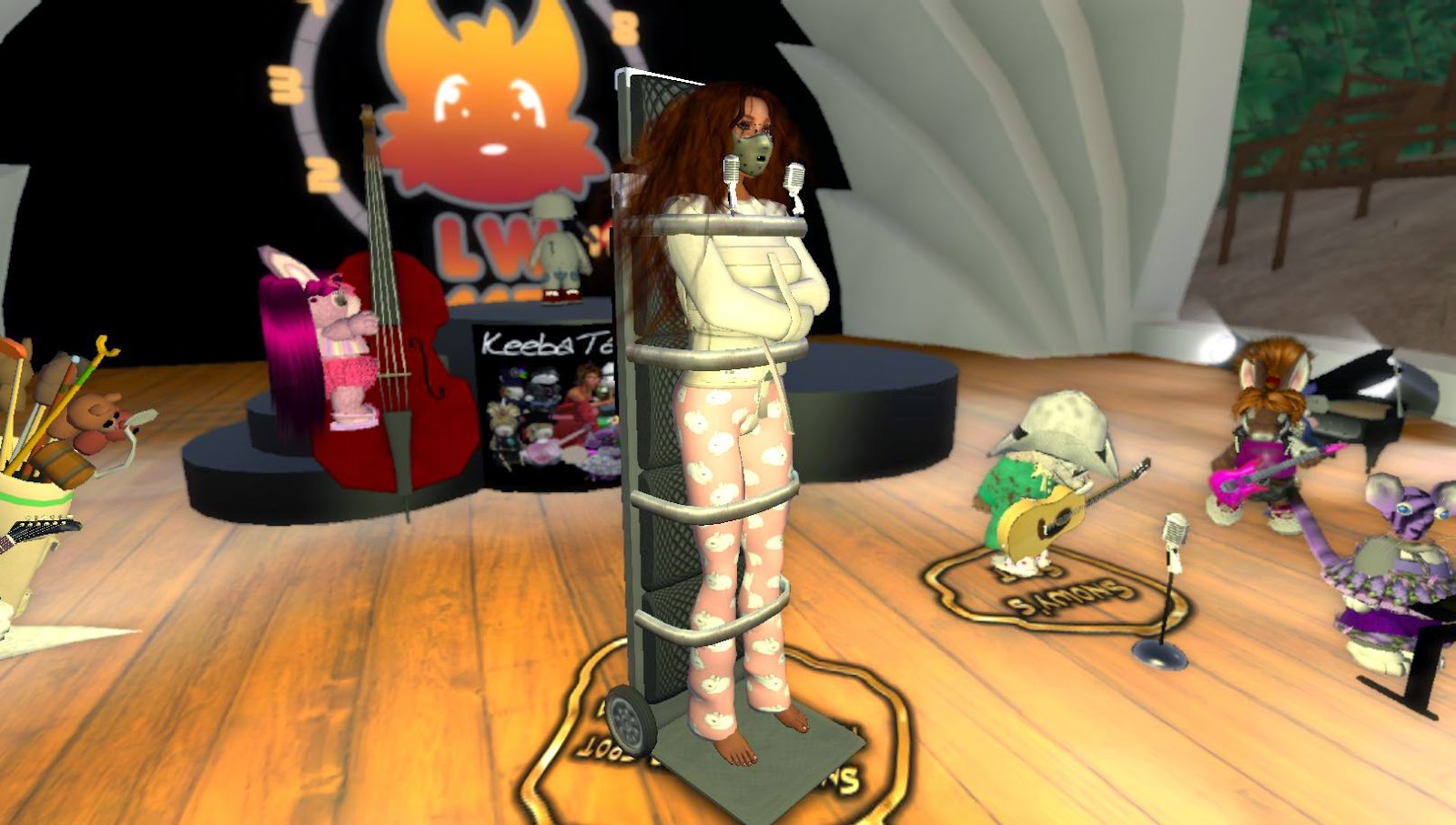 Luskwood is described as being founded "sometime in the end of 2003." But for the past several years, it's birthday has always been celebrated on some Friday in October. This year, it was on the weekend before Halloween, Friday October 24. I'd been told there had been the possibility that it could have been moved to November, or possibly combined with it's Halloween event.

The official events were not at the "Big Tree," which has come to symbolize Luskwood, but at a few other locations. At 3:30PM SL time, Keeba Tammas and her Tiny band started things off at the Amphitheater. The live performer sang while her avatar was wrapped up in a straightjacket, muzzle, and secured to a hand cart for easier movie a-la Hannibal Lecture. No doubt there was some chuckles as why a human would need to be muzzled around tinies. 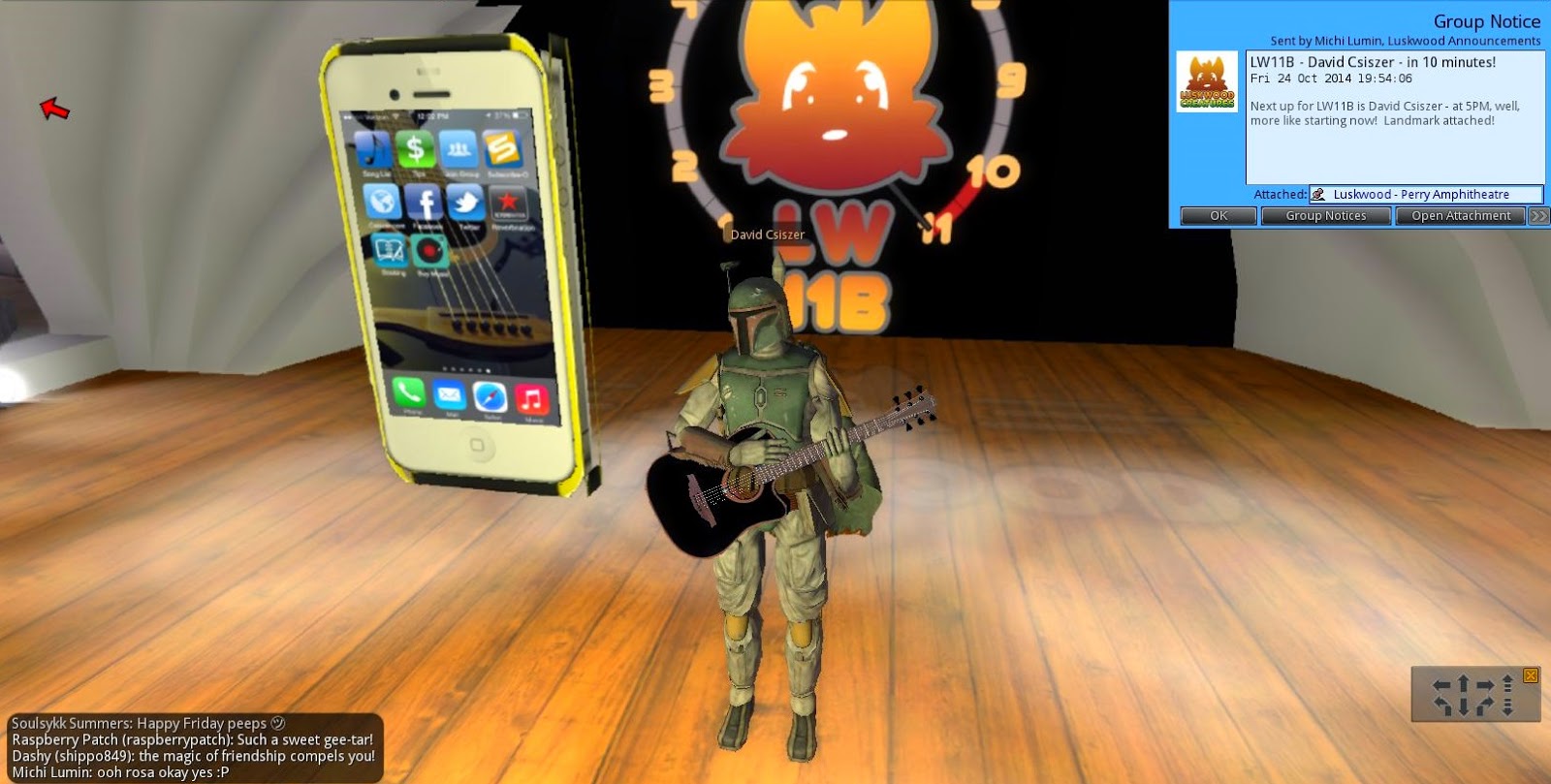 Following Keeba at 5PM SL time at the Amphitheater was David Csiszer. The guitarist strummed his instrument while performing next to a giant iPod while wearing a "Boba Fett" style Mandalorian armor. Despite the heavy gloves, he strummed the stringed instrument just fine. Next at 6PM SL time was Shannon Oherlihy, whom would be the final singer at the Amphitheater that night. 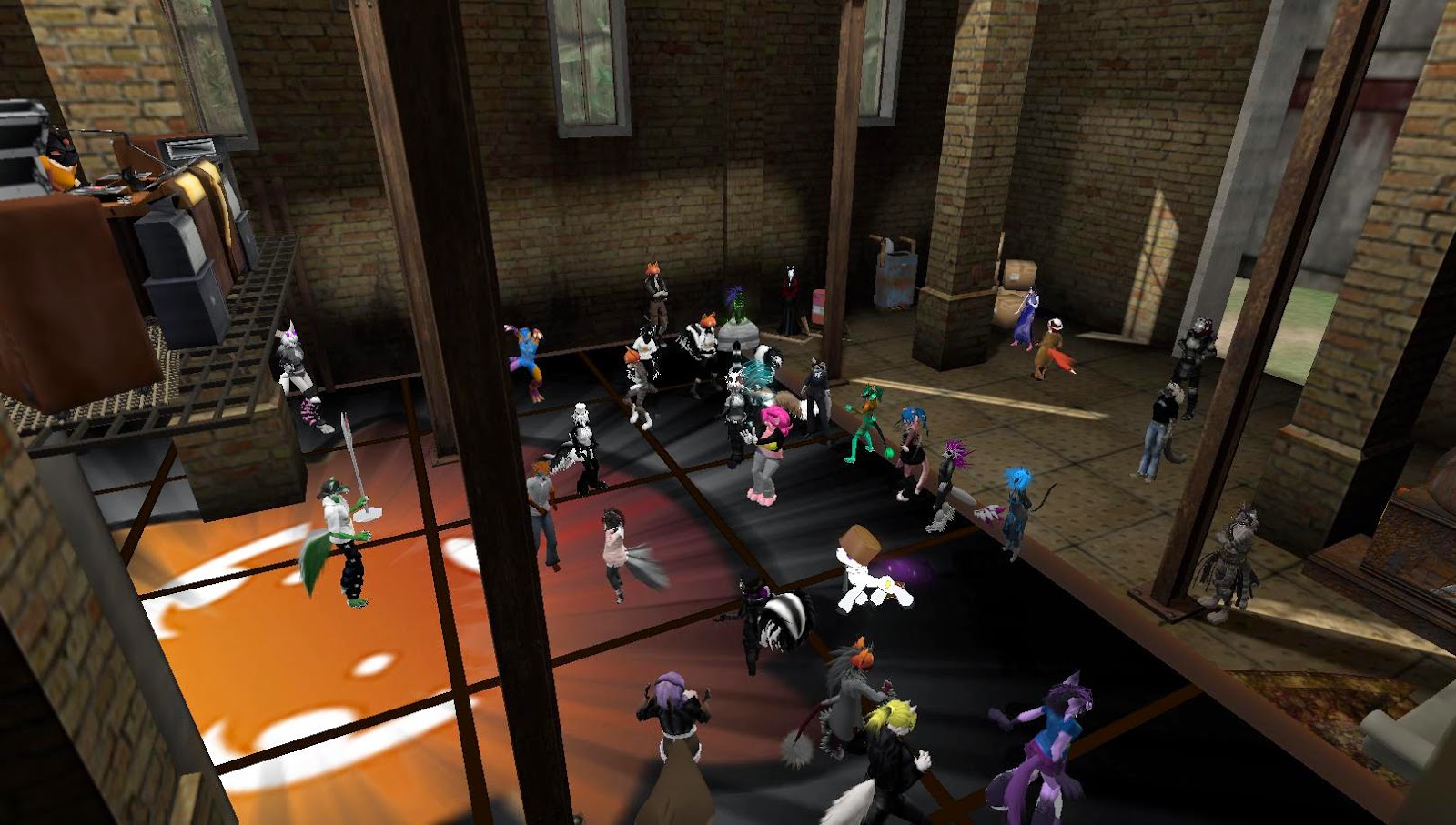 At 7PM SL time, the action was moved to the LW11B warehouse stage at the Old Factory build at Perry, where Frogg Marlowe would do the last of the live music acts that night. Frogg usually appears as half of a duet with Jaycatt Nico, but this time his feline friend was absent due to real life plans. At 8PM, DJ Sweet (Cabaleer Resident) took over. Although he finished his hour to the crowd's satisfaction, the greenish wolfman would later complain of feeling ill and sick. He'd been playing in spite of his ailments. But in the meantime. it was time for DJ Haley to take her turn to spinning the tunes. The energetic squirrelgirl would keep on playing the music until Midnight SL time.

At random times during the DJ events, the founders present would occasionally offer trivia questions with Linden dollar cash prizes for the first correct response, 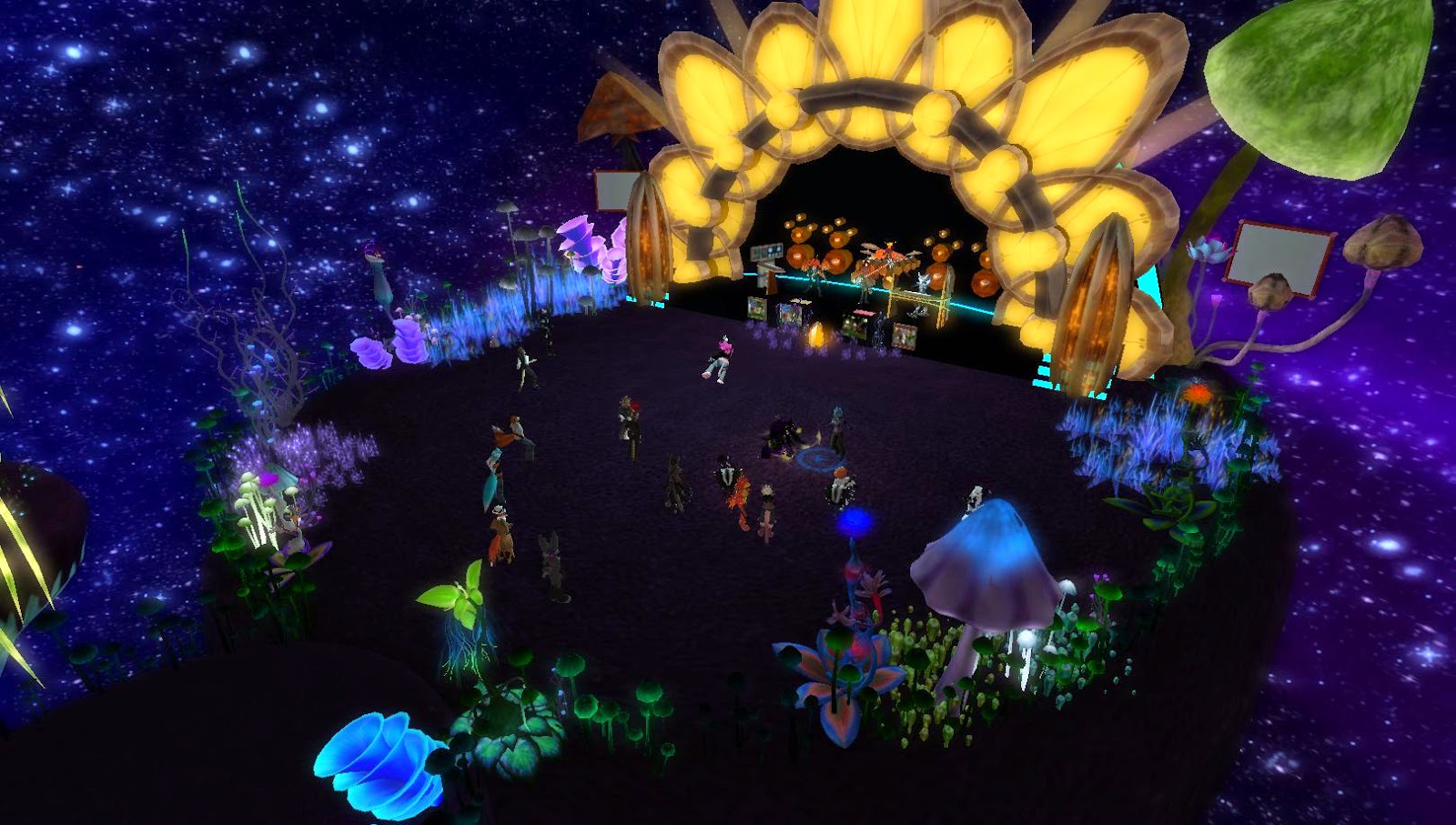 But this would not be the true end of the celebrations. The next day, the staff dusted off the colorful stage that had been the setting for their tenth anniversary celebrations last year, "So finishing up our Luskwood 11th, the wrap up and last act of the weekend will be Alazarin Mondrian at last year's crazy build in Perry.  ... See you there!"

And so at 2PM began the last of the LW11B acts, with Alazarin and his rock n' roll band performing on the stage. On the platform illuminated by strange glowing plants, the audience listened, usually dancing, to the music, in addition to cracking jokes to one another, "Tonight you met real aliens and robots!" "And tacos?" "Space taco." "That may not be healthy." "But it's a space taco!"

There were a number of Luskwood regulars and noted visitors attending the celebration. The founders Arito Cotton, Liam Roark, and the popular Michi Lumin were there, Michi being the one whom stuck it out to Midnight on Friday night. Others there included Ardy Lay, Satch Flan, Hagalaz Nilsson, Quiana Levitt, OldVamp Resident, Cereal Milk, Athy Squeegee. Reignick Deakins, Fury Rosewood, Roxikat Muse (furry artist), and others. 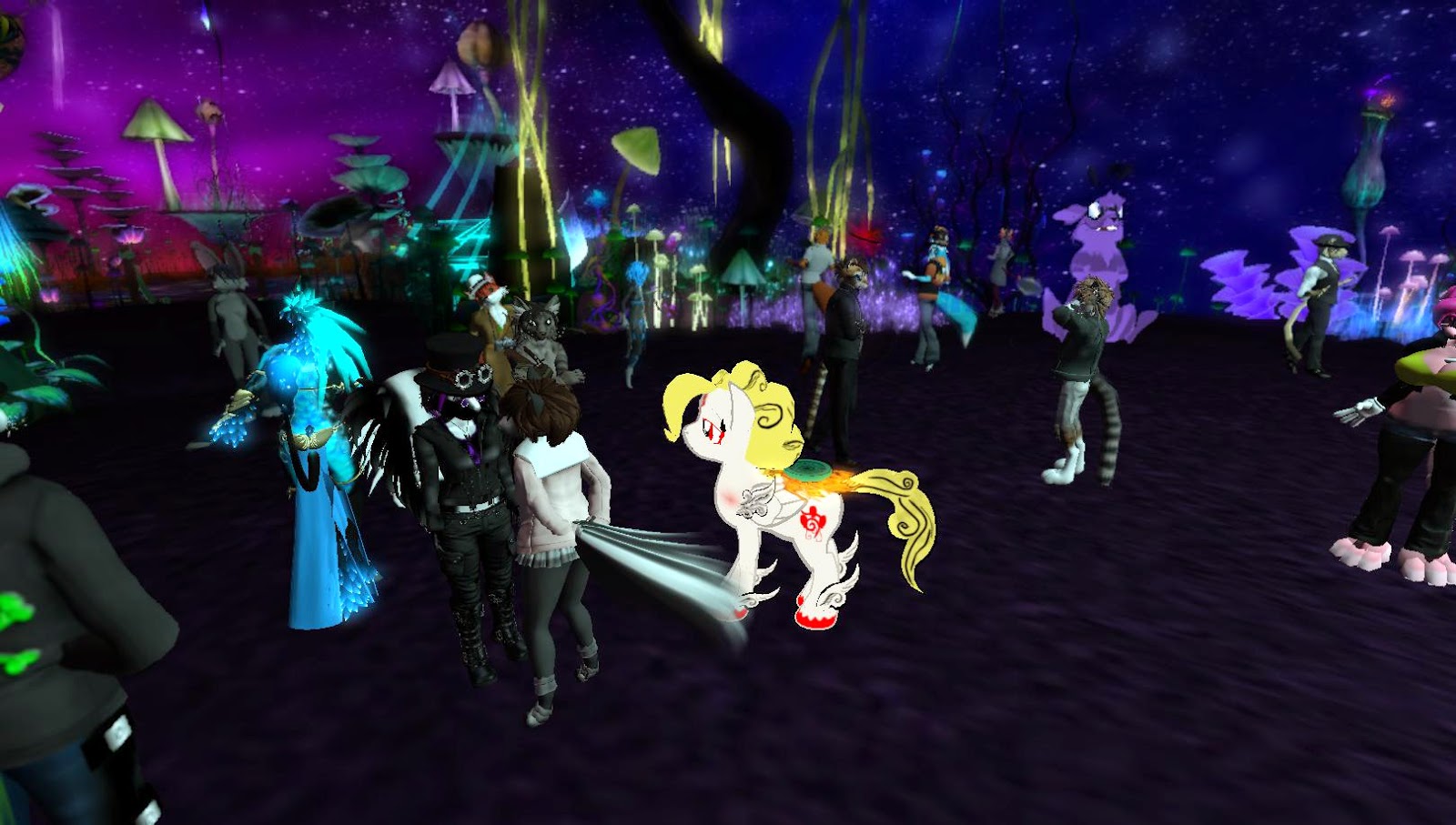 At one point, someone accidentally had their Voice on, "Somebody's got an open mike." Someone asked, "is mike supposed to be on here?" Michi Lumin answered, "It usually is in Perry. The main platform is text only because it 'grew up' before voice existed, and we don't want to have two disparate .. communities at once, which is kinda how it goes. You either gotta go full in voice, or text only, otherwise you have people who can't or won't do either." Someone asked, "I thought mike was always disabled except for the Cafe." Michi told him, "Nah, it's on in Perry. just nobody uses it."

At the end, Michi thanked the musicians, "This is actually pretty much the wrap up of LW11B guys,  since we started 3:30 PM yesterday but -- thanks Alazarin. (smile) ... Anyways. thank you everyone.. Performers, coordinators, builders, really, as I said this years LWB really was done by the core and the community... So that means a lot... Next year we will start planning earlier; Ahty says we'll start planning in July (raspberries)."

And so, the oldest community in Second Life turned a year older. But in a few days it's party time again. On the afternoon and evening of October 31, Luskwood holds it's Halloween party.