A Roman Holiday, a Rezzday, and Partying 'Till You're Purple


Last weekend in Second Life, Saturday February 21 to Sunday February 22, had quite a number of events. From the Roman Lupercalia, to the Second Life Science Fiction Convention, to the opening event of "Paint Second Life Purple, to Marianne McCann's Rezzday party, to the Veterans Isle fundraiser, there was plenty to see and do. 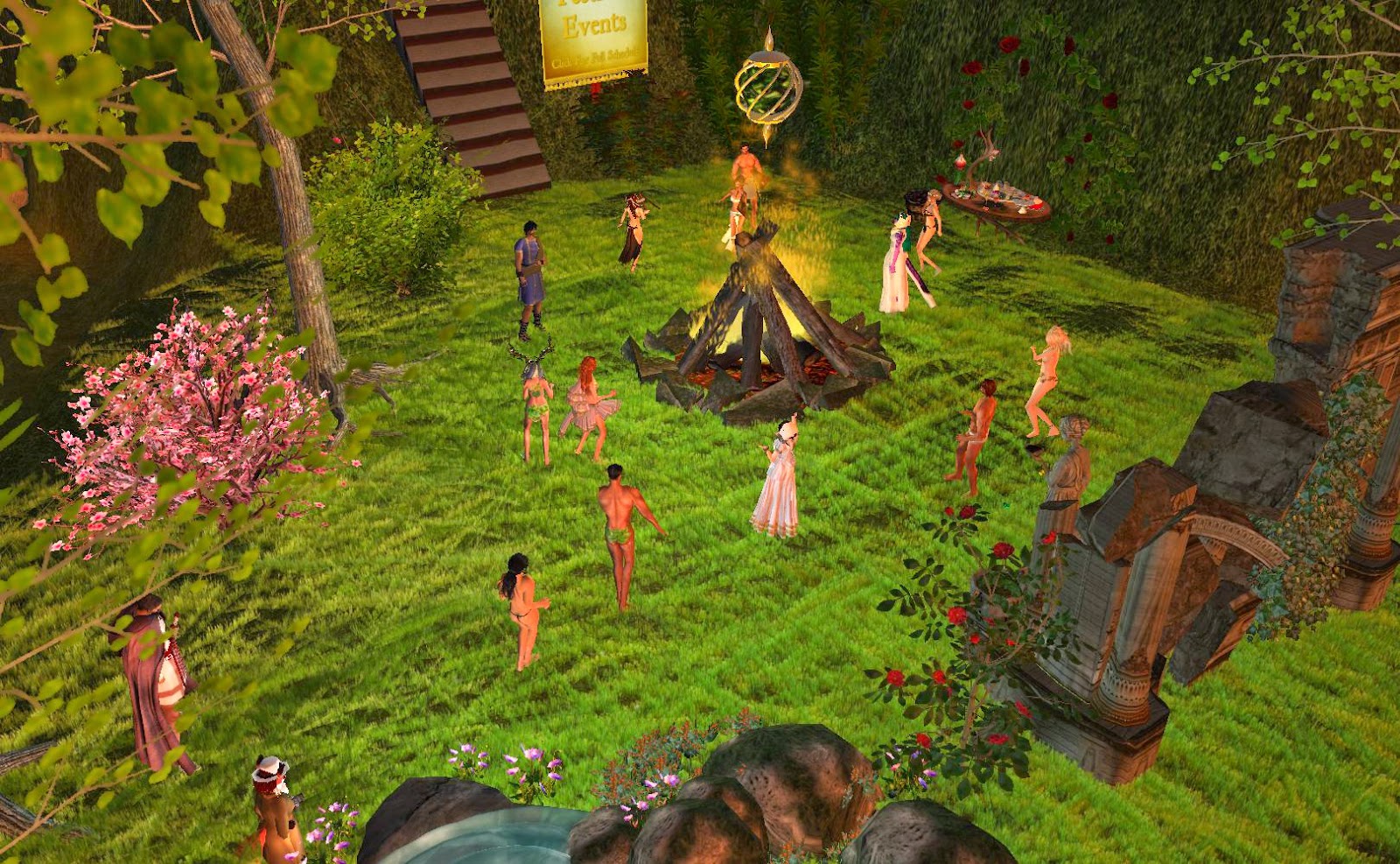 Saturday morning in the Roma community had the first day of their Lupercalia festival. A holiday of ancient Roman times, it has been loosely compered to Valentines Day, which later in history would fall around the same time of year.

In celebration of this most ancient of festivals we will be performing a Roman ritual for Faunus Lupercus, the God of Wild Things and Lupa, the she-wolf who nourished the founding fathers Romulus and Remus. After the rite, we will have the Running of The Luperci - half-naked youths and maidens who bless the people of the ROMA. The spectators will run ahead of the Luperci, who will lightly flog them with the goatskin floggers in hopes of fertility (both of mind and body). Following the ritual, we will have our traditional Lupercalia Feast - and clothing is optional! 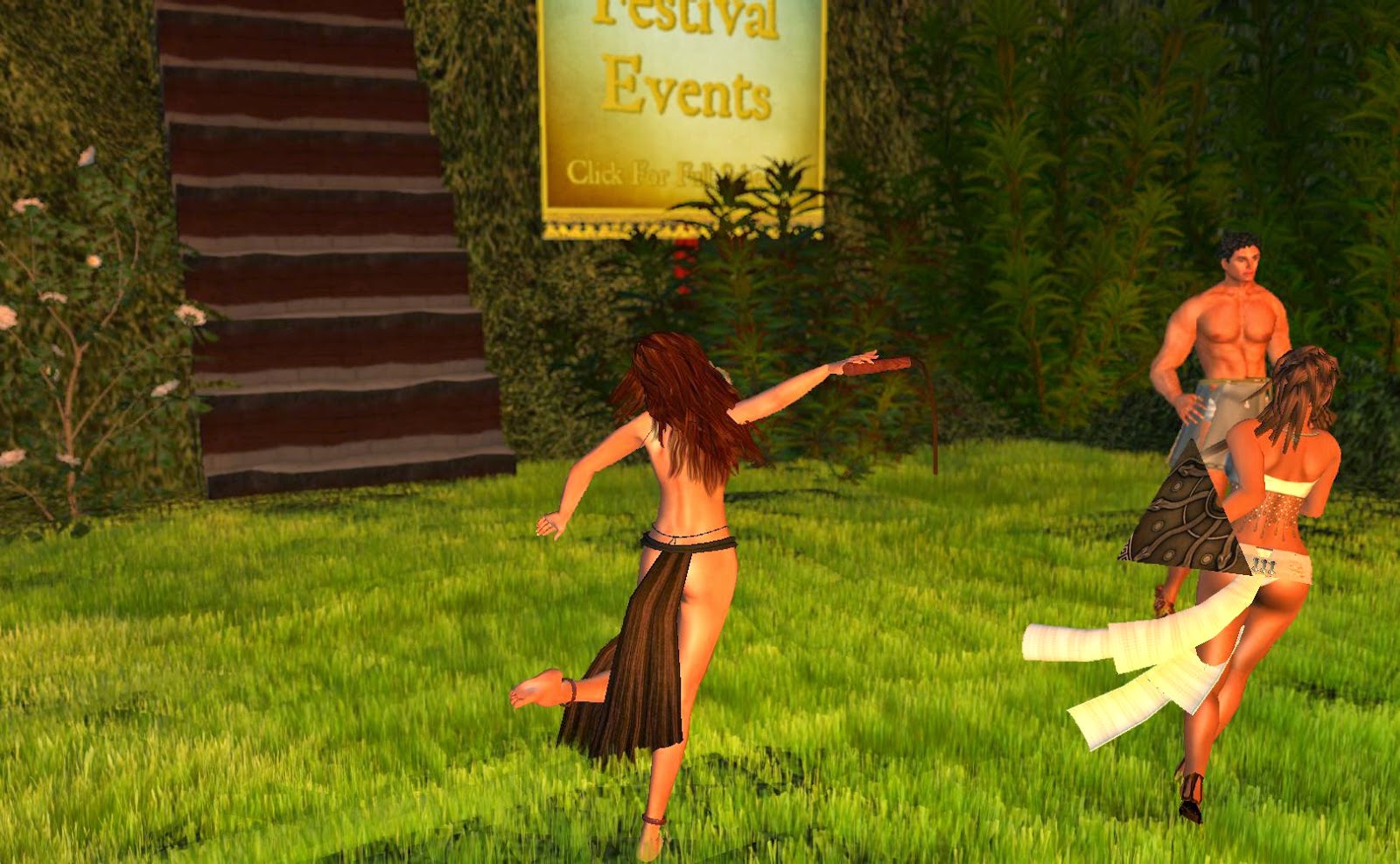 I arrived a bit late to see the opening ritual and the Running of the Lupercalia itself, so sorry, no pictures of women (and men) getting flogged with goatskins soaked in milk. But I did come across the dance afterwards. There were some topless ladies, but not everyone was truly naked, as there were a few fig leafs and thin strips of cloth around. Someone commented this was the most dressed she'd seen the people at the festival. Still, it was amusing to see the one furred resident wearing more clothes than most of the bunch, until she put her toga aside, though was still wearing a bikini-like outfit.

There were two other events that day, a lecture on love and sexuality in Roman times, and a "Wolf Hunt" in which the participants would tag wolves around the area. But in this place in which lady furs were among the Romans, friends I talked to about the event had a few jokes about whom might be hunting whom. Sunday would have a Grand Feast and a game of Harpastum, a kind of Roman football. 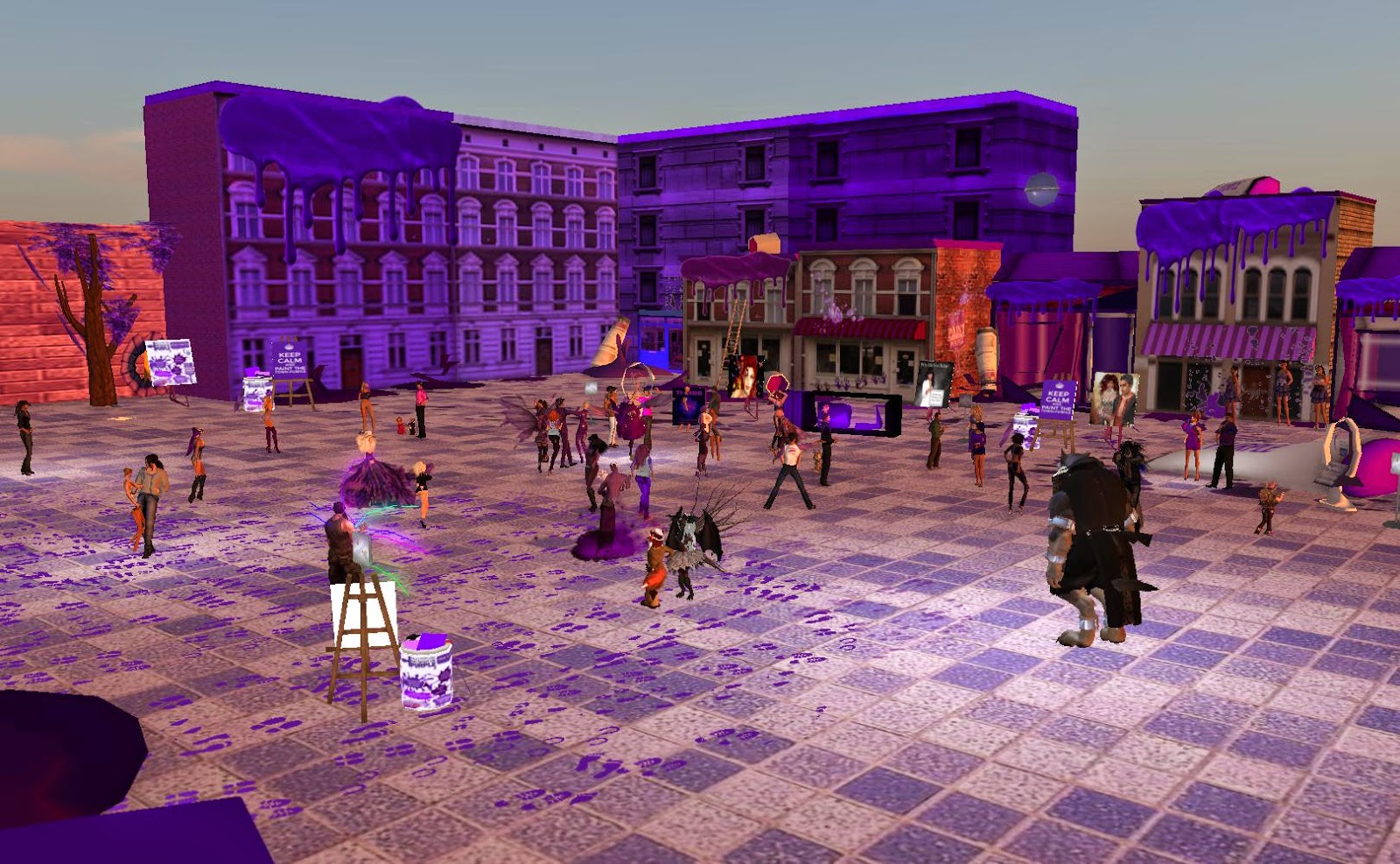 That afternoon would be the opening party for "Paint Second Life Purple" event. This was the opening kickoff of the two week long Relay for Life spinoff event, which will end just as the official Relay season begins.

The official Paint SL Kickoff party will be held ...  on American Cancer Society Island from 4pm - 9pm. DJ Dee Wolfe will kick off the party at 4 pm SL time, followed by Special Guest’s Satin & Erin. DJ Dianne Wycliffe will close the part out from 7pm to 9 pm SL time. 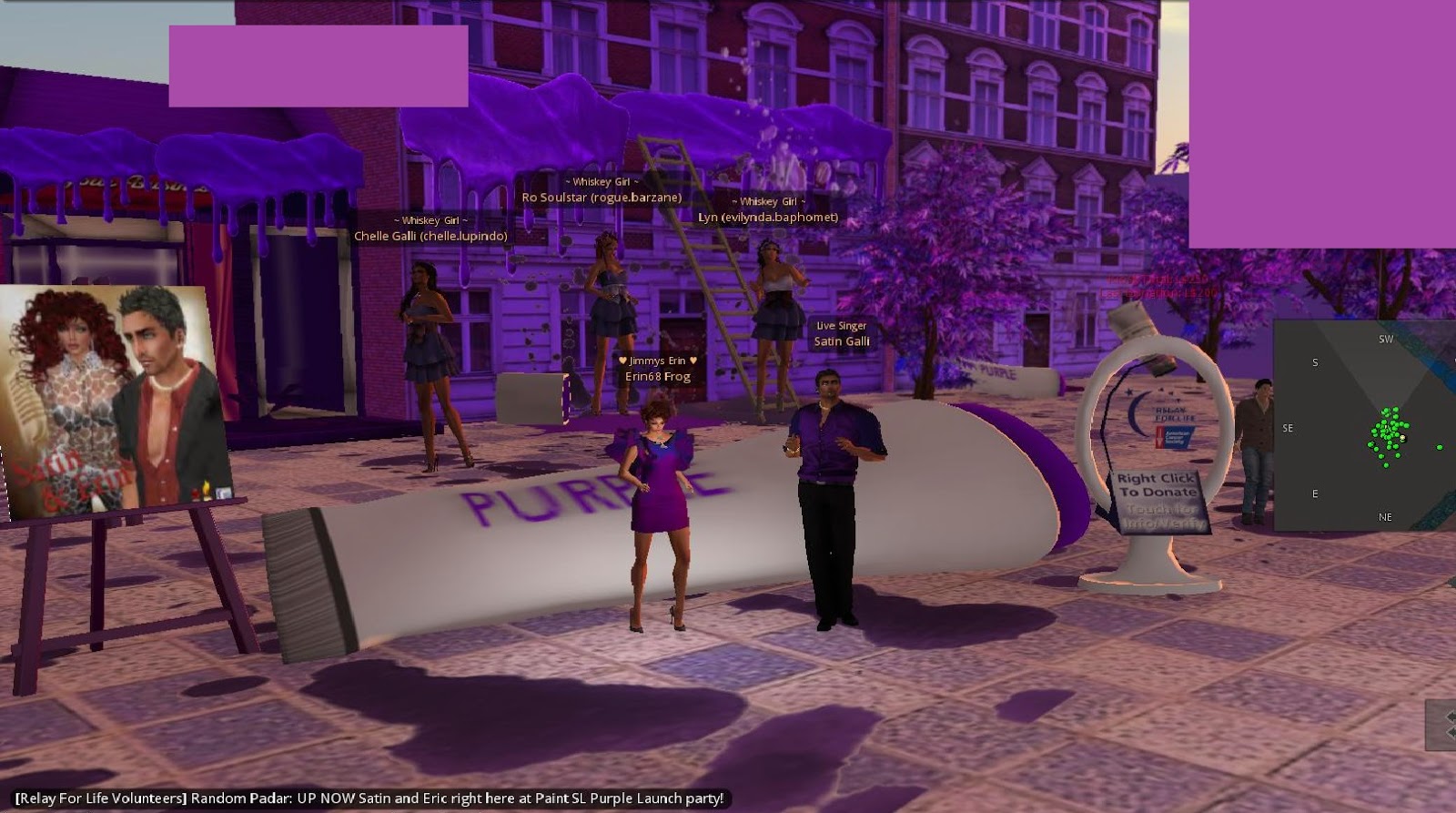 The event was held on a platform high above the American Cancer Society sim, lined with purple buildings, had a floor littered with purple footprints leading away from purple paint cans. "Paint SL Purple" kits were available for pickup. The partiers themselves were dressed in purple outfits, had skins (or fur coats) dyed purple, or both. There were a number of Relay notables there, such as DJ Madonna, Trader Whiplash, and others.

It was enough to make one ... blue in the face. The party went on into the evening, lasting past it's planned closing time.

Besides the Purple event, the Second Life Cheerleading Squad RFL team would hold it's own event, a Mardi Gras party that lasted from 9AM to 9PM, with a mix of DJs and live musicians such as 10-11 Harmonia Trefoil. 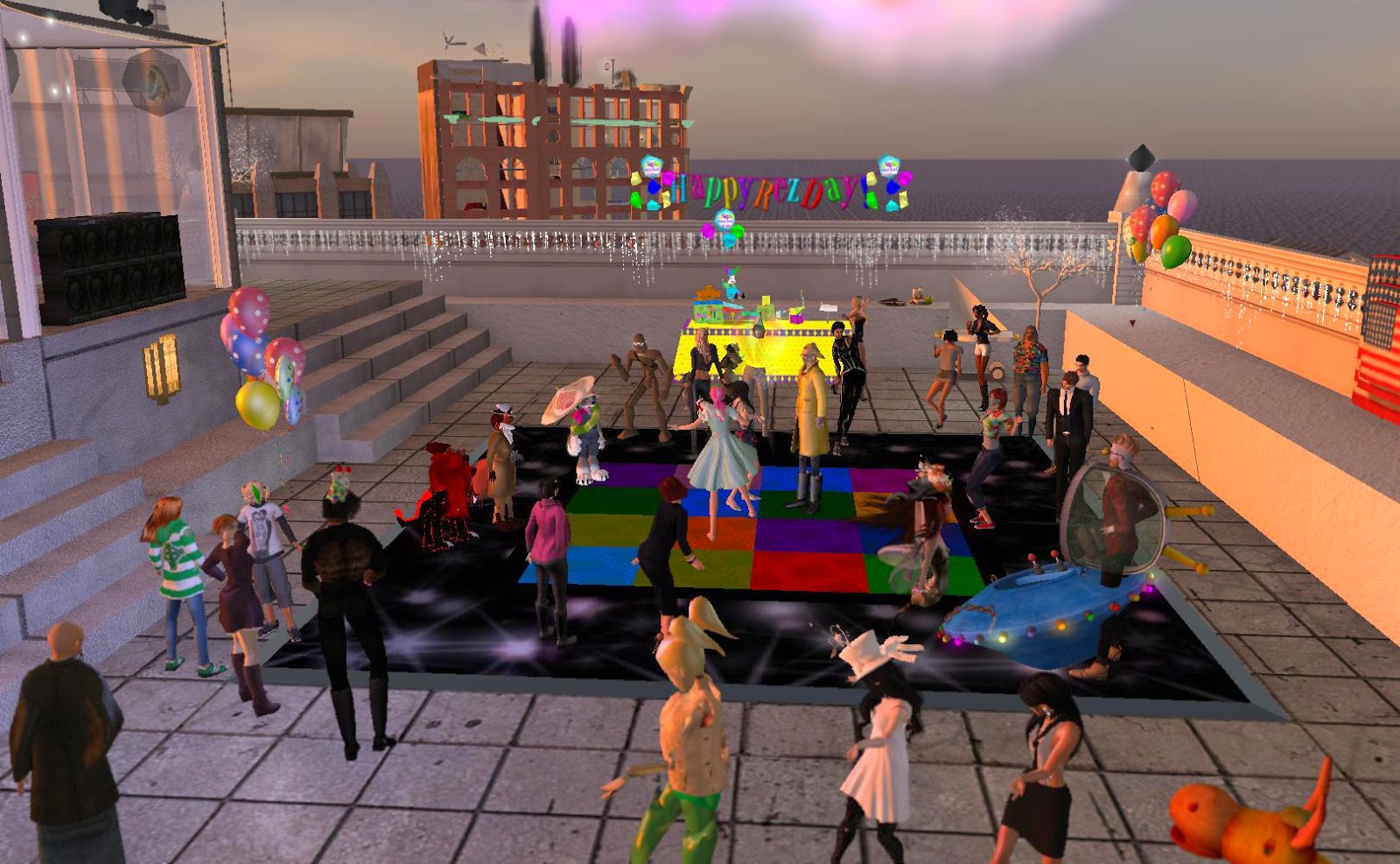 Sunday would have it's own events. One took place at Bay City. It was the Rezzday of one of it's more noted locals and one of Second Life's most known child avatars: Marianne McCann.

The party was attended by a large number of residents from and outside the community, from Kenny Luckless, noted comedian Lauren Weyland, Uccello Poultry (Miss Bay CIty 2015), Torley Linden (via an alt), GoSpeed Racer who provided the music, Draxtor Despress of the "Drax Files," SL Nerwser's own DrFran Babcock, and many others.

There were no shortage of jokes from, "Hippies are dropping in." "They'll let anyone in. Next it'll be mimes." "My only regret is not more watermelon." "You can't get more watermelon than Torley." "No nibbling on the Torley." "I never want a Rez party, I want to be a newbie for the rest of my life." 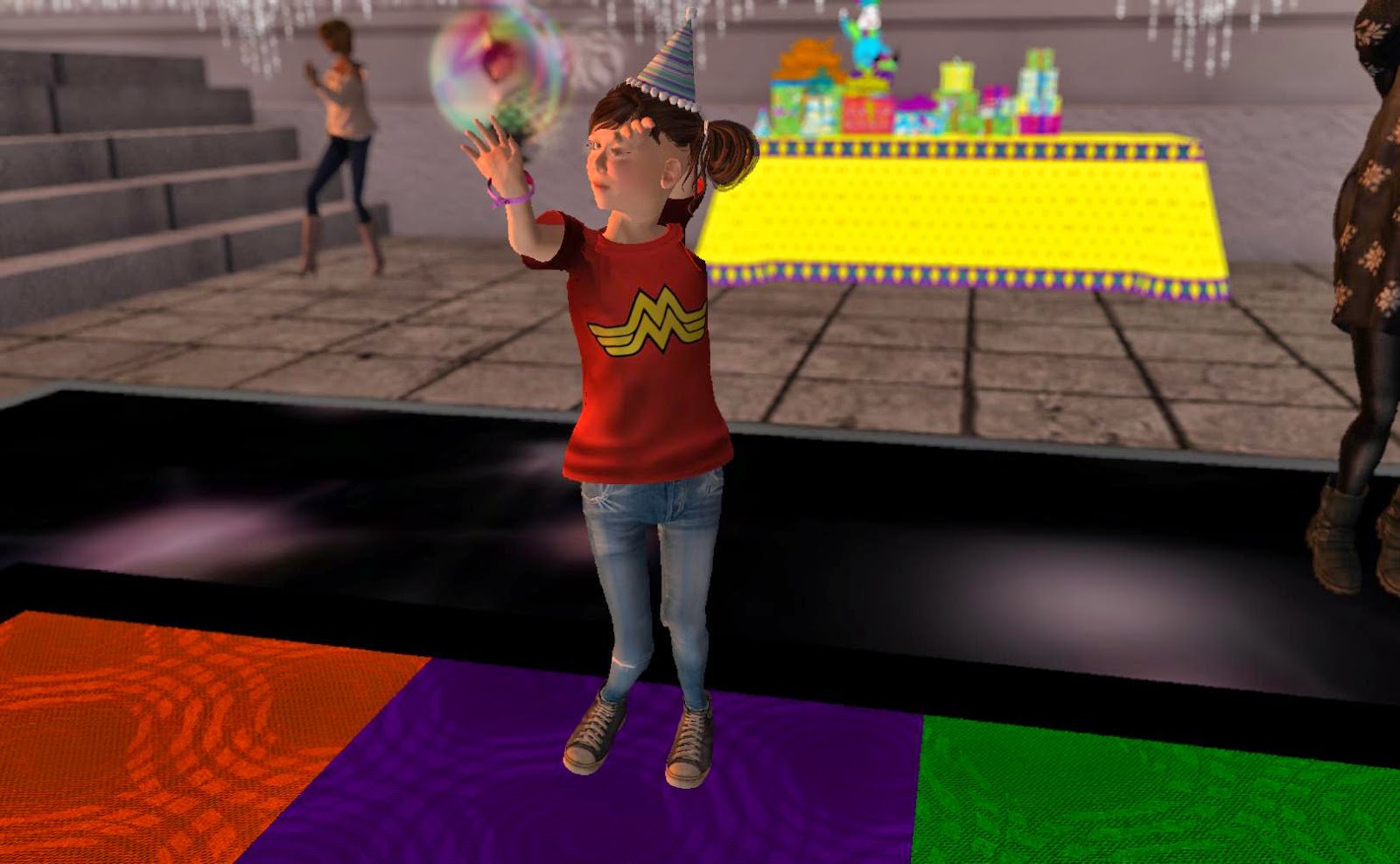 Marianne commented, "My rez age has finally surpassed my (roleplay) age." One resident responded, "Hehe, Mari, you have Simpsons Syndrome! You never age! *winks*" After some snickers, Uccie quipped, "Quick! paint her yellow!" After more chuckled, Marianne commented, "Heck, I still wear the same glasses I bought on February 22nd 2006." Of her beginings, she joked she " 'failed' orientation island, and had a friend tp me off after I stumbled into yet another river."

Uccello told the group, "I met Mari at SL6B (I think it was 6) when she did a space ship theme for her exhibit. It was really great, but of course I griped about something. We've kept in touch since! She's made my Second Life all the more special!" 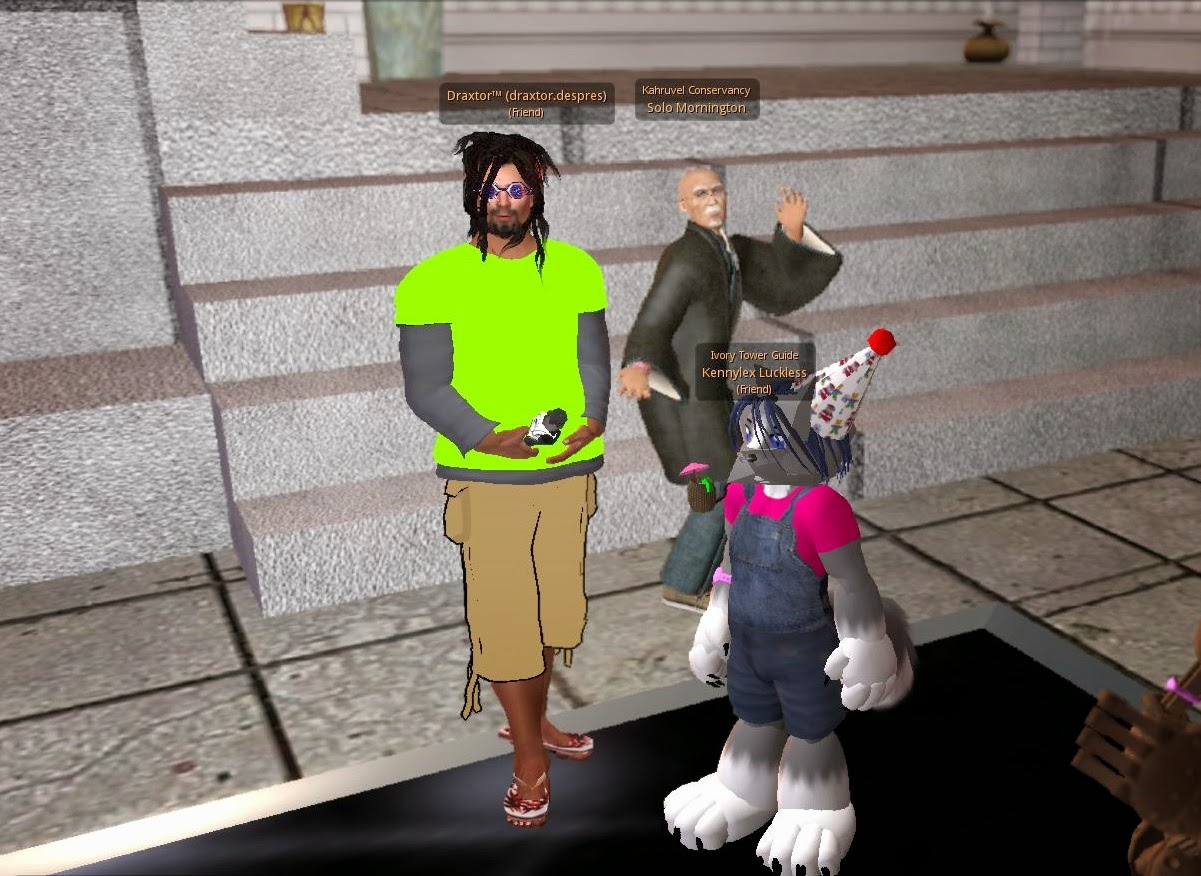 Justin Esparaza commented, "I was looking through Salazar Jack’s computer and found some old photos of Marianne with Osprey Therian and Salazar. One of the three of them exploring Magellan Linden's Squall campsite and one where Mari and Sal were investigating Bodega going offline. I have to say they made nice rezday presents for Marianne." Marianne told him, "I deeply appreciate them, Justin."

Torley himself would say to the rezzday girl, "You are a true uber-explorer, Mari. I continue to enjoy the stories in your photos so much. Thanks for all your discoveries and sharing over the years, so much community spirit."

The party would continue on for a while, eventually everyone going their separate ways.

There were other goings on that day. The Second Life Science-Fiction Convention had opened Friday and people were continuing to see it's exhibits. That evening was the "Homes For Our Troops" fundraiser at Veterans Isle, featuring musicians such as Frets Nirvana. It would raise over 180,000 Lindens.

It was quite a weekend.