Almost since it's beginning, the main club for the Sunweaver community has been Club Cutlass. Starting out as a pirate-themed club, since then the popular hangout has seen four transformations, most having an open-air dance floor with no ceiling. These included a Meso-American pyramid style and a steampunish/pirate themed round design, labeled "The Donut," that saw regular performances three times a week every week from February 2012 to it's final performance last week on March 14, 2015. 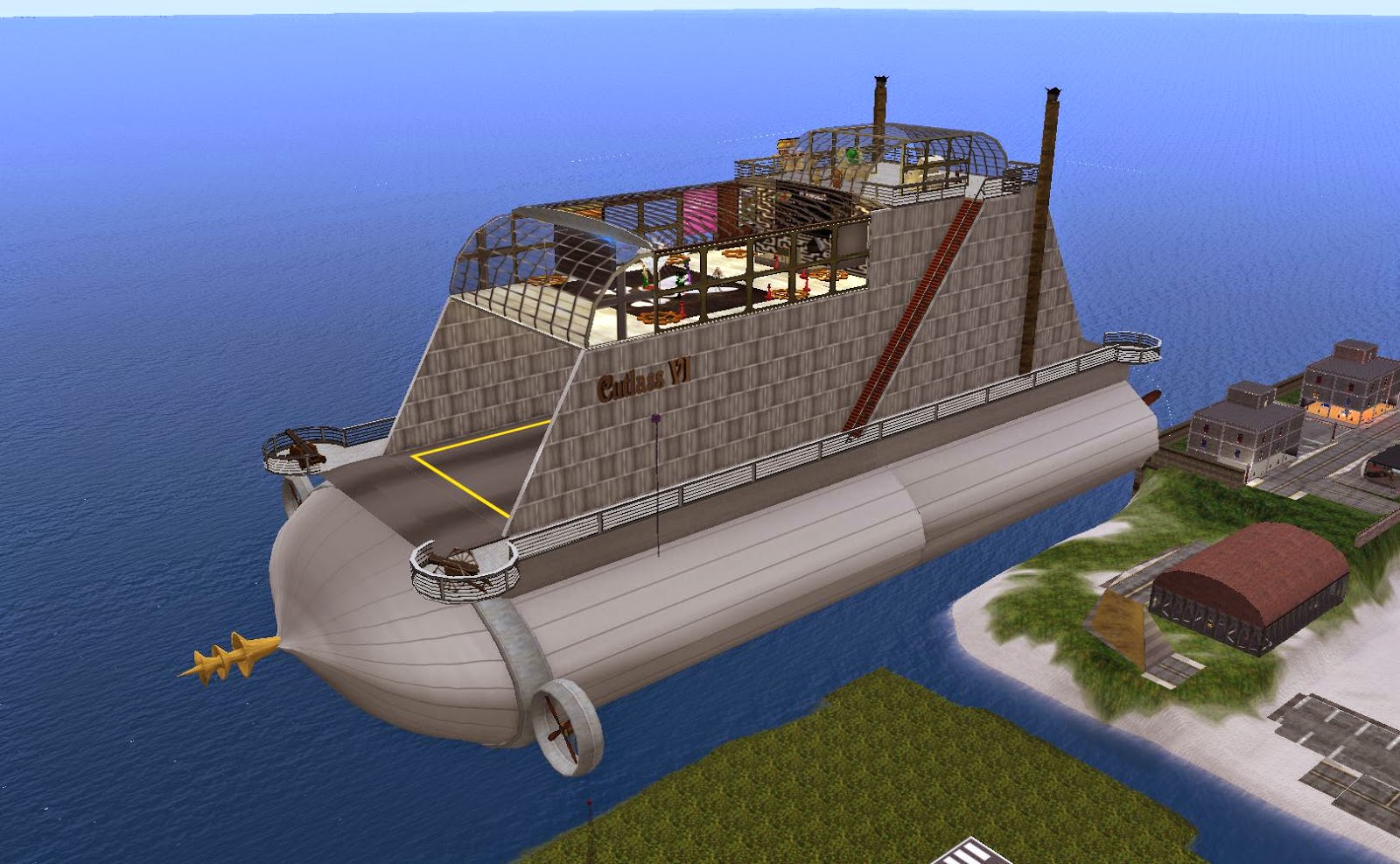 But just as the "Donut" was being taken down, a new club, Cutlass Six, was being readied for action. Larger than the previous club, this one is a steam-powered airship with four levels, the service deck with engine room, the hangar, the activity deck, and the bridge. 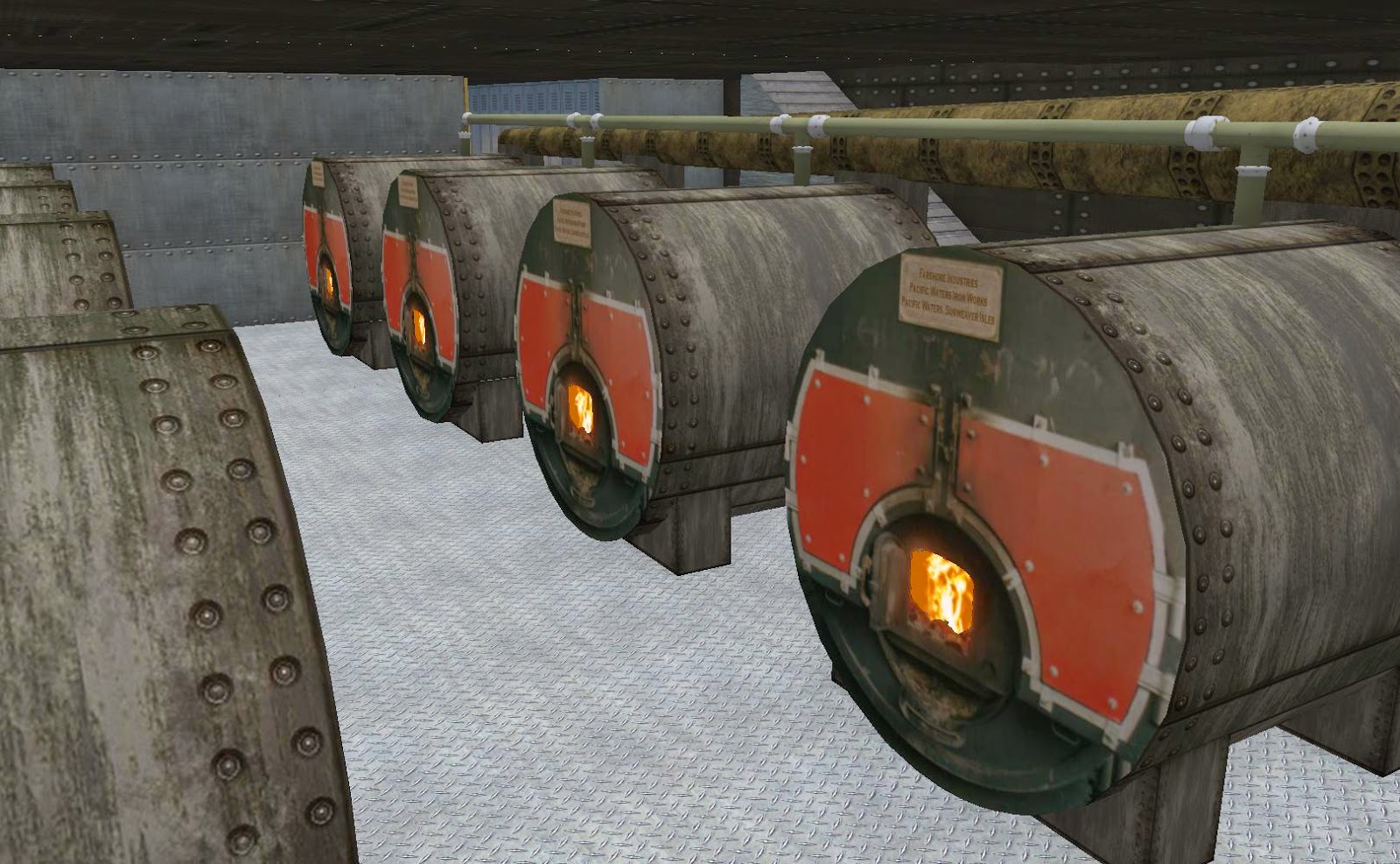 The club was built by Cynthia Farshore and Shockwave Yareach. A number of details were worked in, such as flickering fires for the boilers, an elevator that could take people (or planes) back and forth from the hangar and service deck. 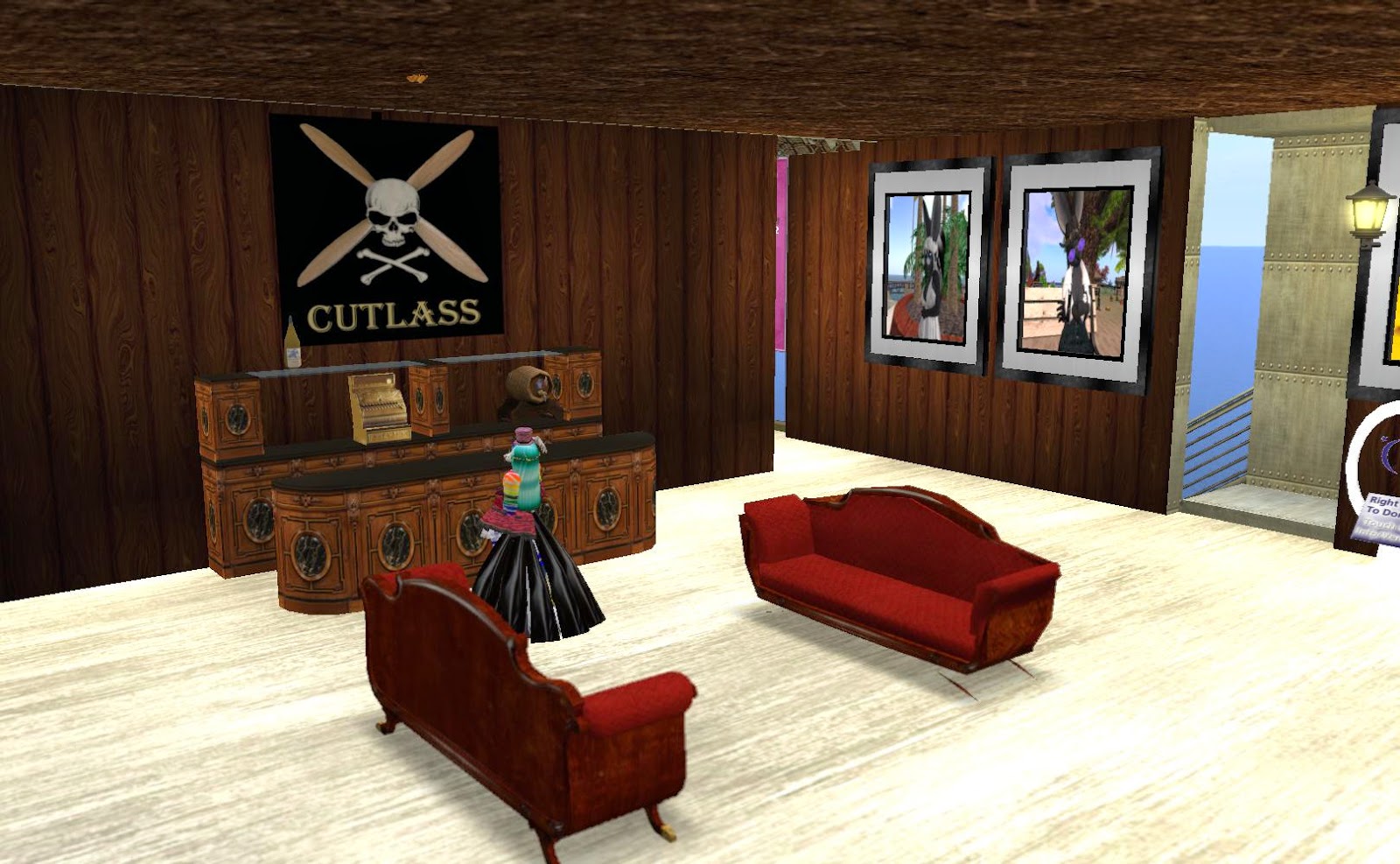 In front of the dance area is a sitting room for a more relaxed social gathering. It's also where there are several Relay for Life kiosks for "Bid Me" and other events.

On Wednesday March 18 at 6PM SL time, the new club was finally ready for it's first official event. The LM and SURL were given out in group notices and group instant-messages respectively. The theme: steampunk. OK. HERE WE ARE. IT'S THE BIG GRAND OPENING OF THE NEW CLUB CUTLASS, AND FOR OUR FIRST EVENT, WE HAVE DJ CYNTHIA AND OUR 'STEAMPUNK' PARTY. SO GET DRESSED IN PROPER ATTIRE, JOIN OUR CONTEST, AND LETS LAUNCH THIS NEW SHIP! 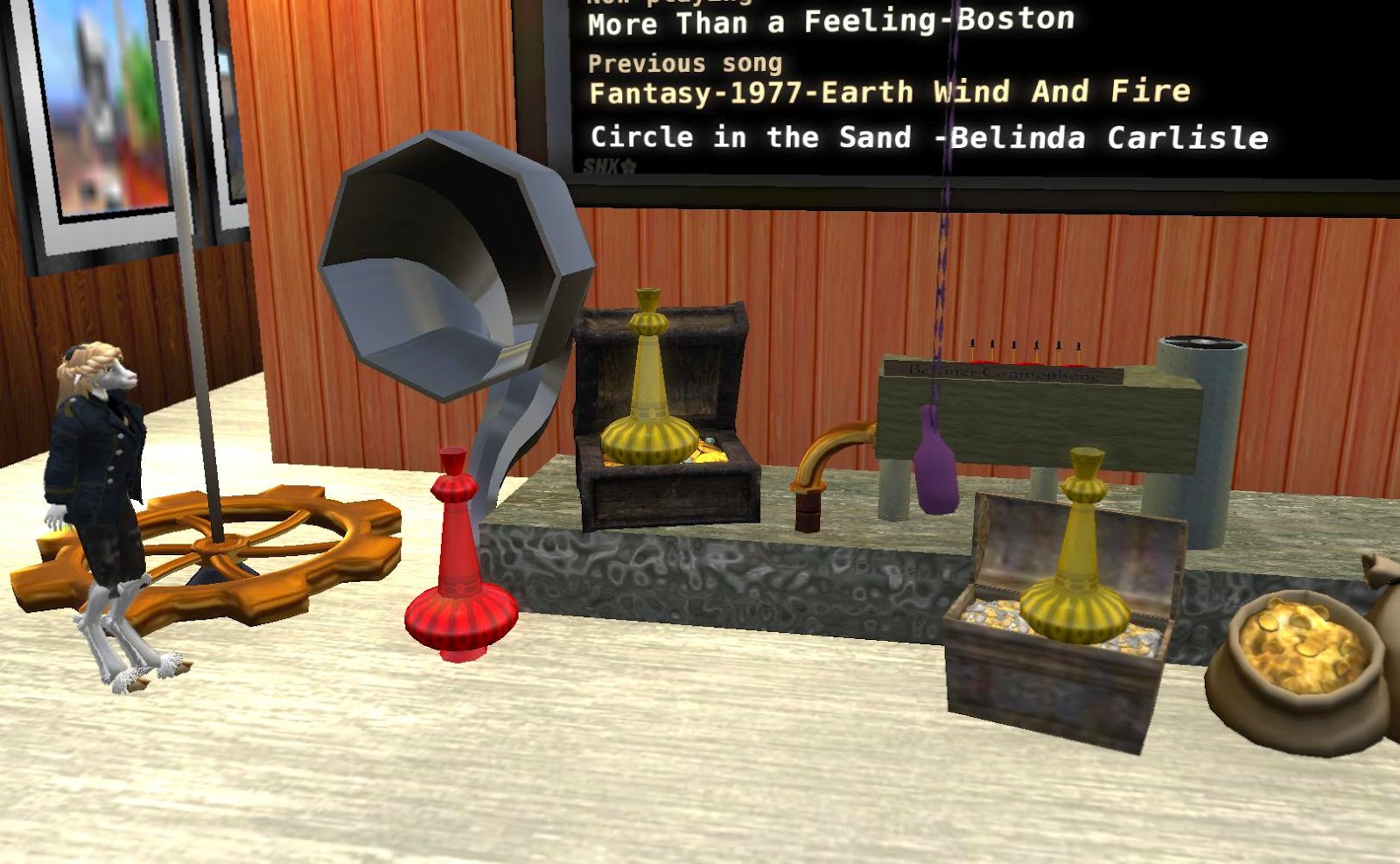 Cynthia addressed the crowd, "Well ladies and gentlemen it has been a grand effort to bring this ship from dream to reality. Tonight we launch and even though the ship is underway there will be much left to do. In the coming days months even year improvements and additions will be made . It was a labor of love and tears. Much was learned during the build along with my partner Shockwave Yareach we brought this together. So now Shocky you have anything to say?"

Shockwave's response was, "Through the trials and the pain, we have brought this into being from nothing.  Long may this ship serve its crew and their friends!" Hearing the music, he grinned, "And we're launchign to a Genesis song too."

Cynthia then asked Sunweaver chief Rita Mariner to do the honorary breaking of the champagne bottle, "Rita Mariner captain of the airship Cutlass please christen your ship." Rita wryly commented, "If Gil was here, she would pee all over it." Then swung the bottle, where it shattered against the DJ stand, "I broke it!?!, Sweepers, man your brooms!" 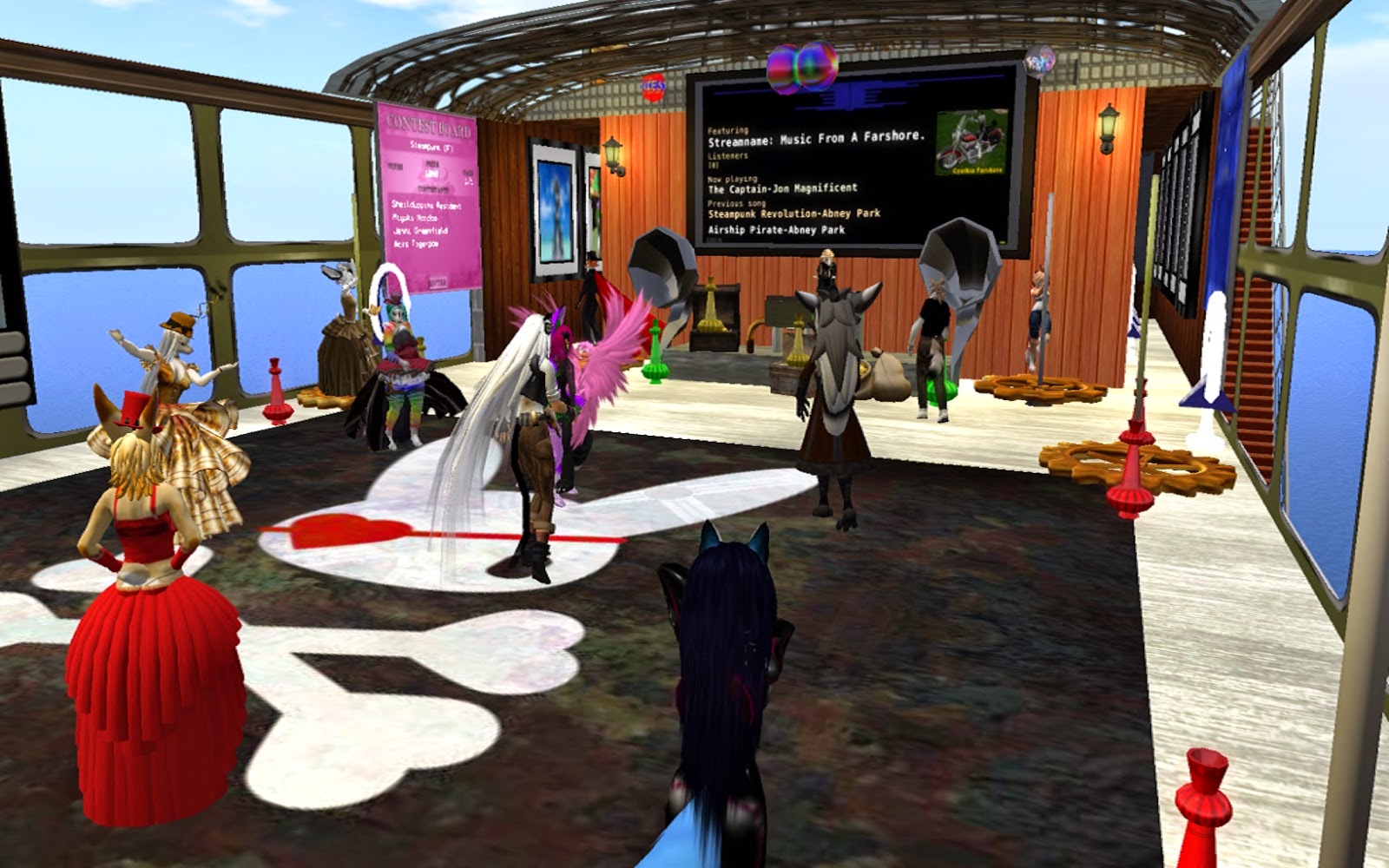 And with that, the party began. Cynthia spun her tunes while the crowd danced away on the floor, or a few people on the dance poles. 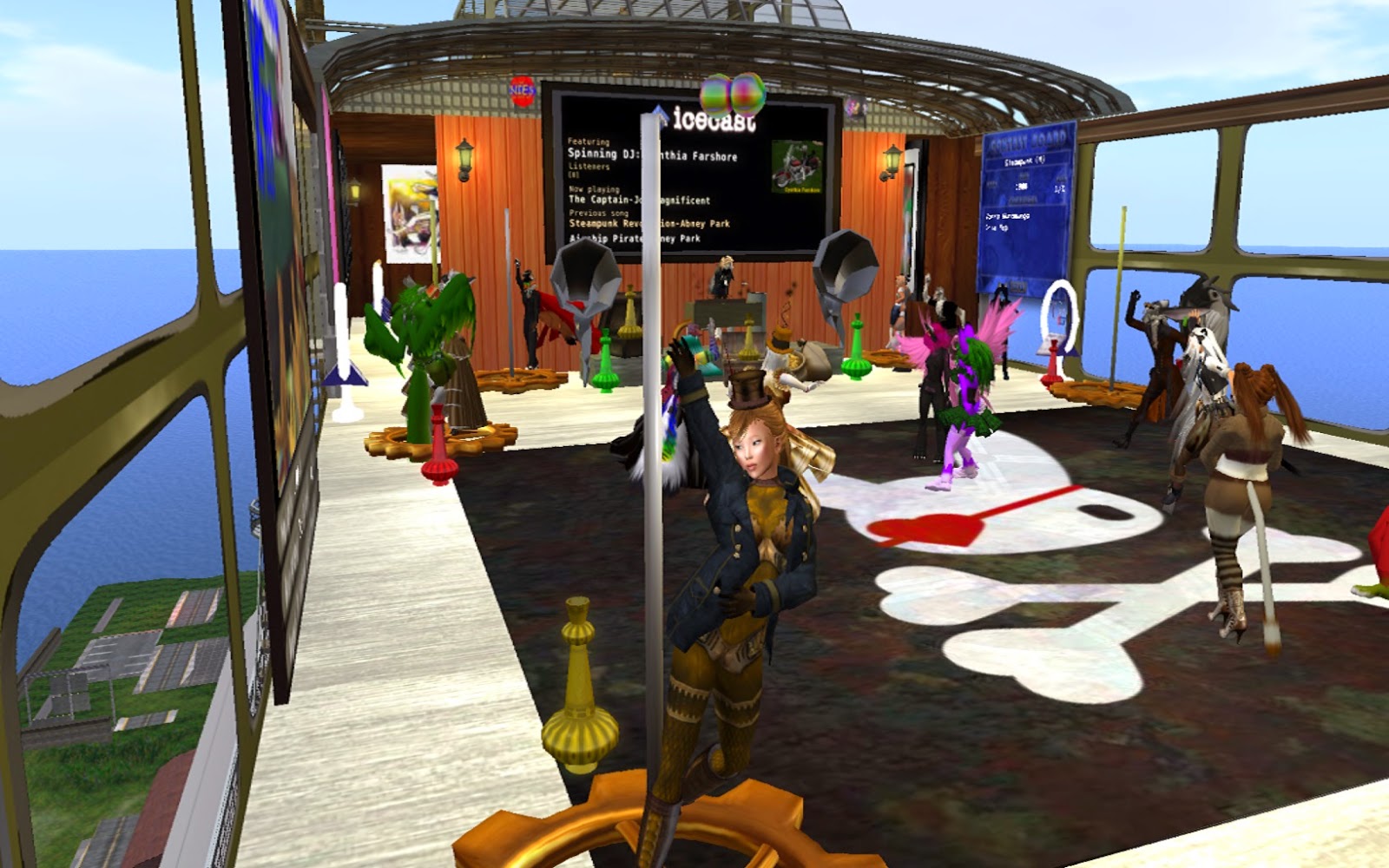 The party went on past the end of the contest at 8PM to a bit past 9 (Midnight EST). 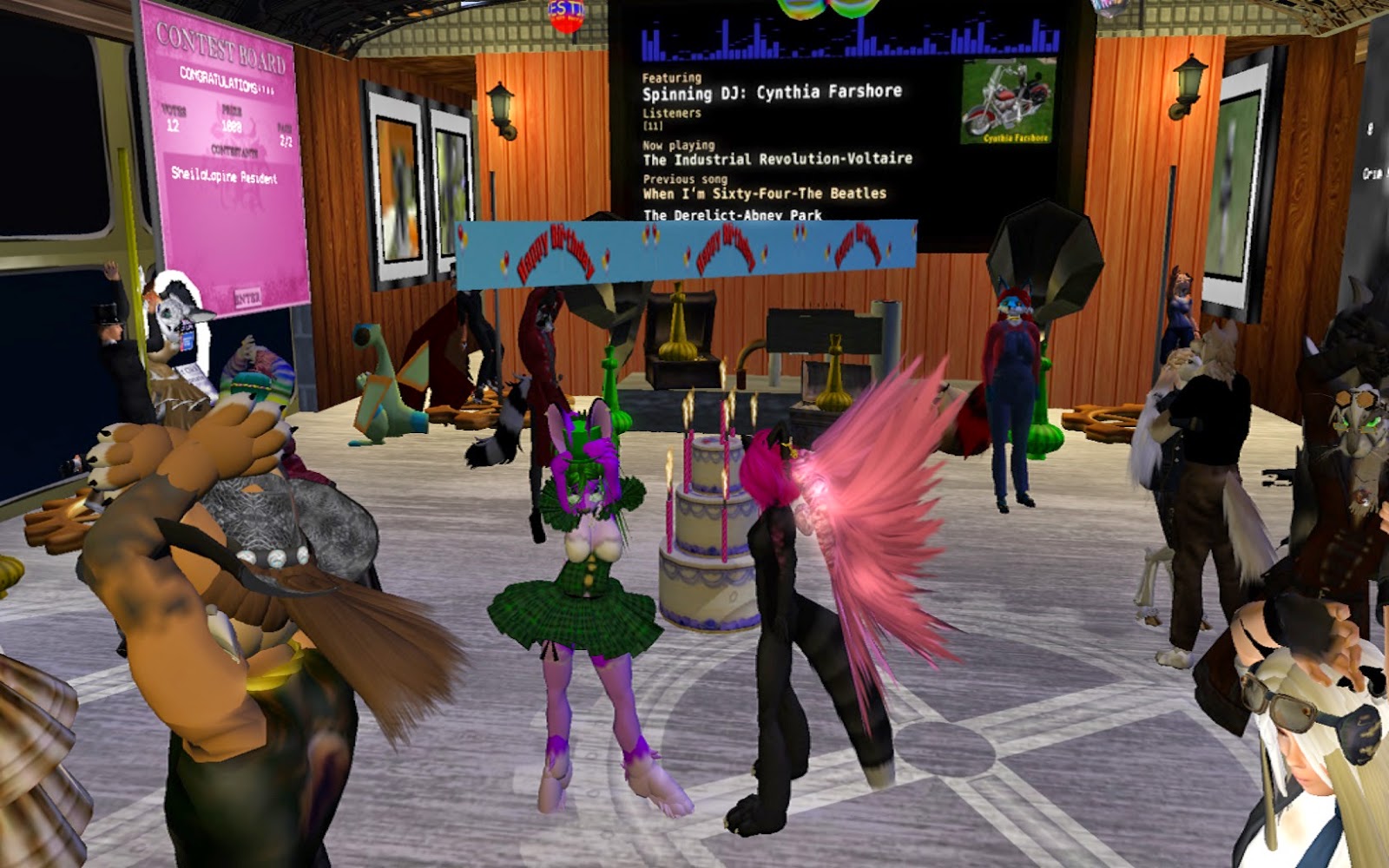 The 1000L prizes that night went to Crim Mip for the men and for the ladies Sheila Lapine. 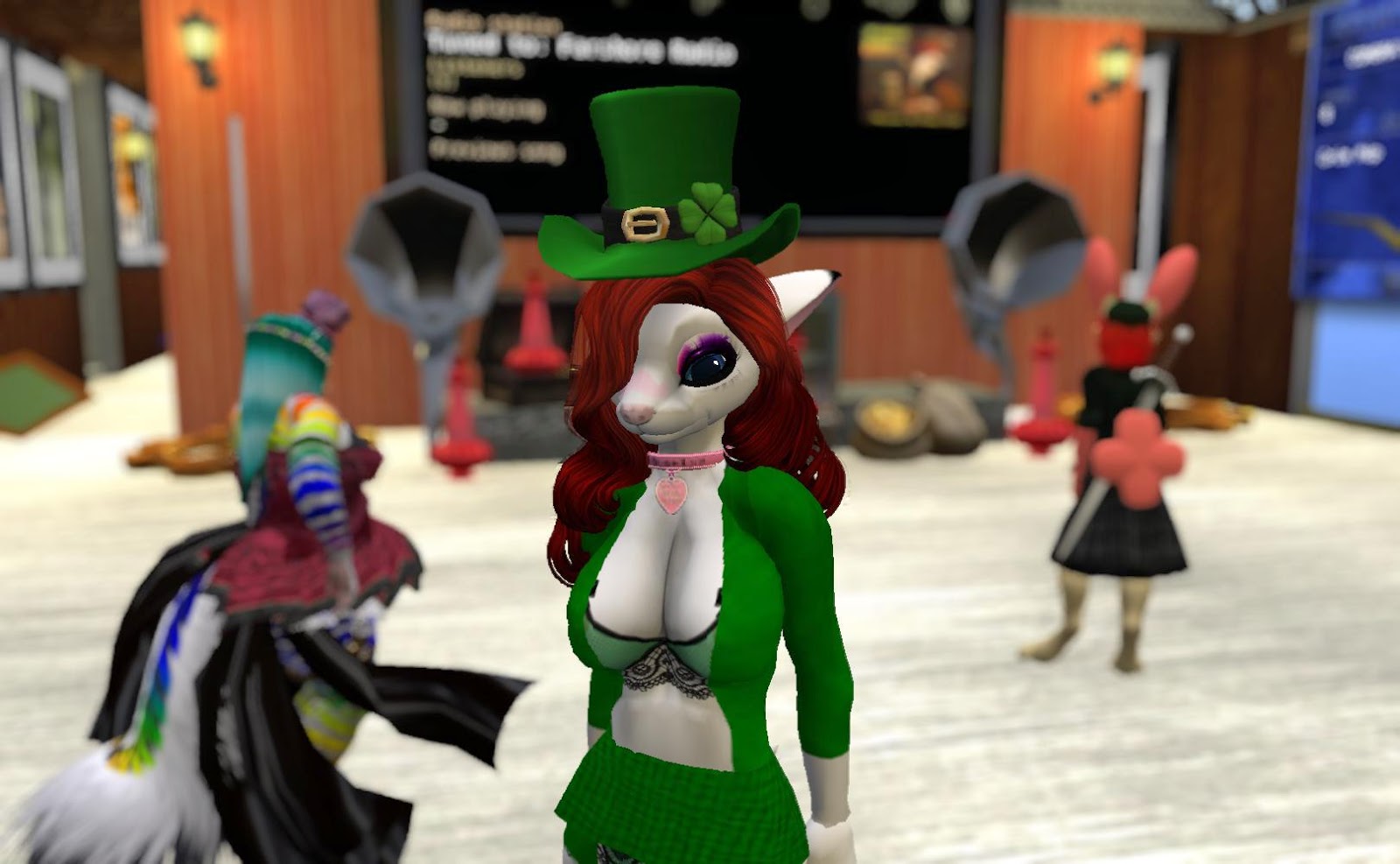 And so, a new chapter has begun for the main club of the Sunweaver Estates. It will have regular events on Wednesdays, Fridays, and Saturdays from 6PM to 8PM, sometimes going on for an hour more or longer.

Some pictures from Cynthia Farshore.

Posted by Bixyl Shuftan at 4:00 PM