Final Day of the Fantasy Faire 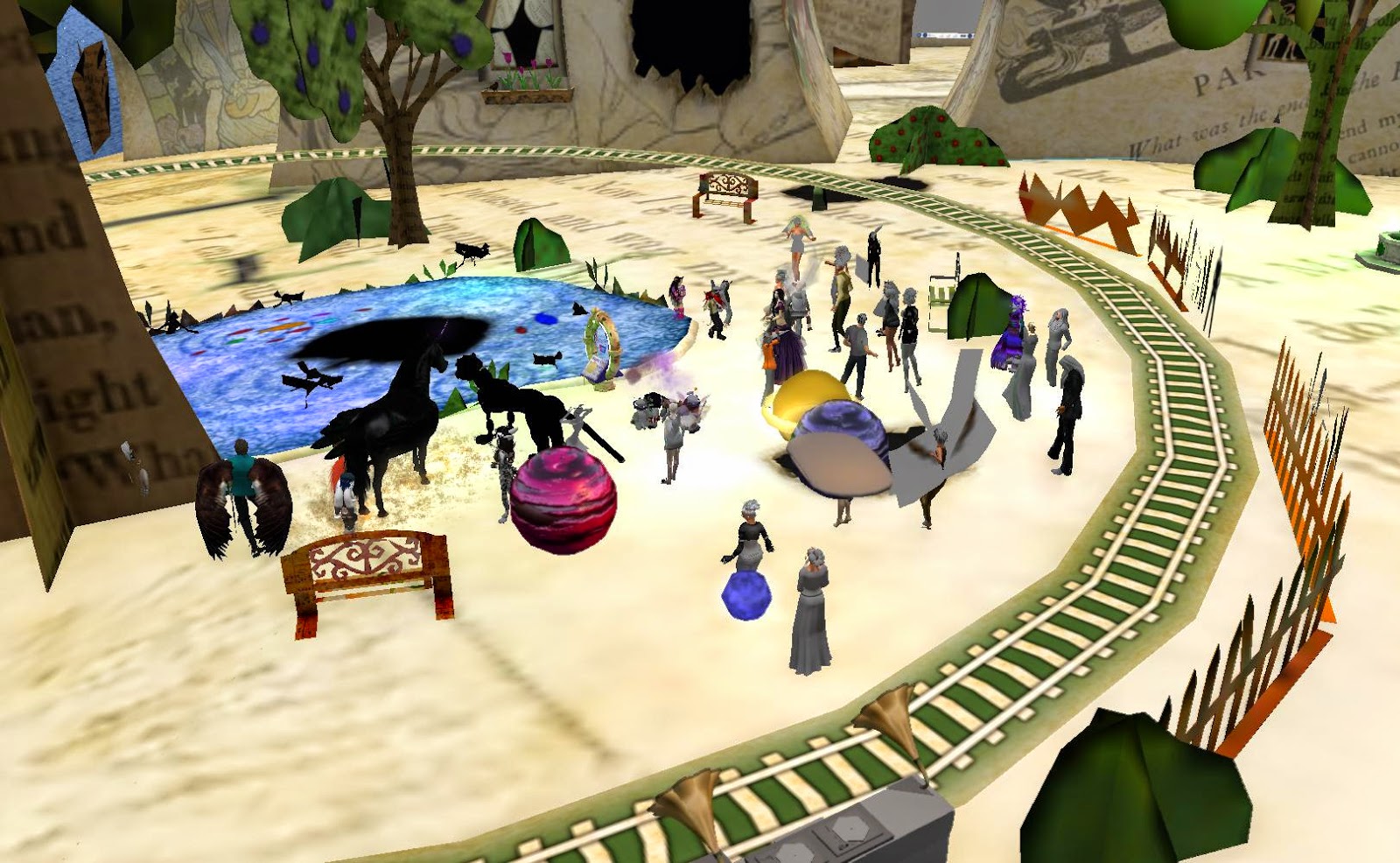 Sunday May 3 was the last day of the 2015 Fantasy Faire, the yearly week-long fantasy-themed event that's both a fundraiser for the Relay for Life and a chance for builders to show off what they can do. And there were a few more events at the grounds before the event was technically over. This included an interactive roleplay in the Poppetsborough sim. 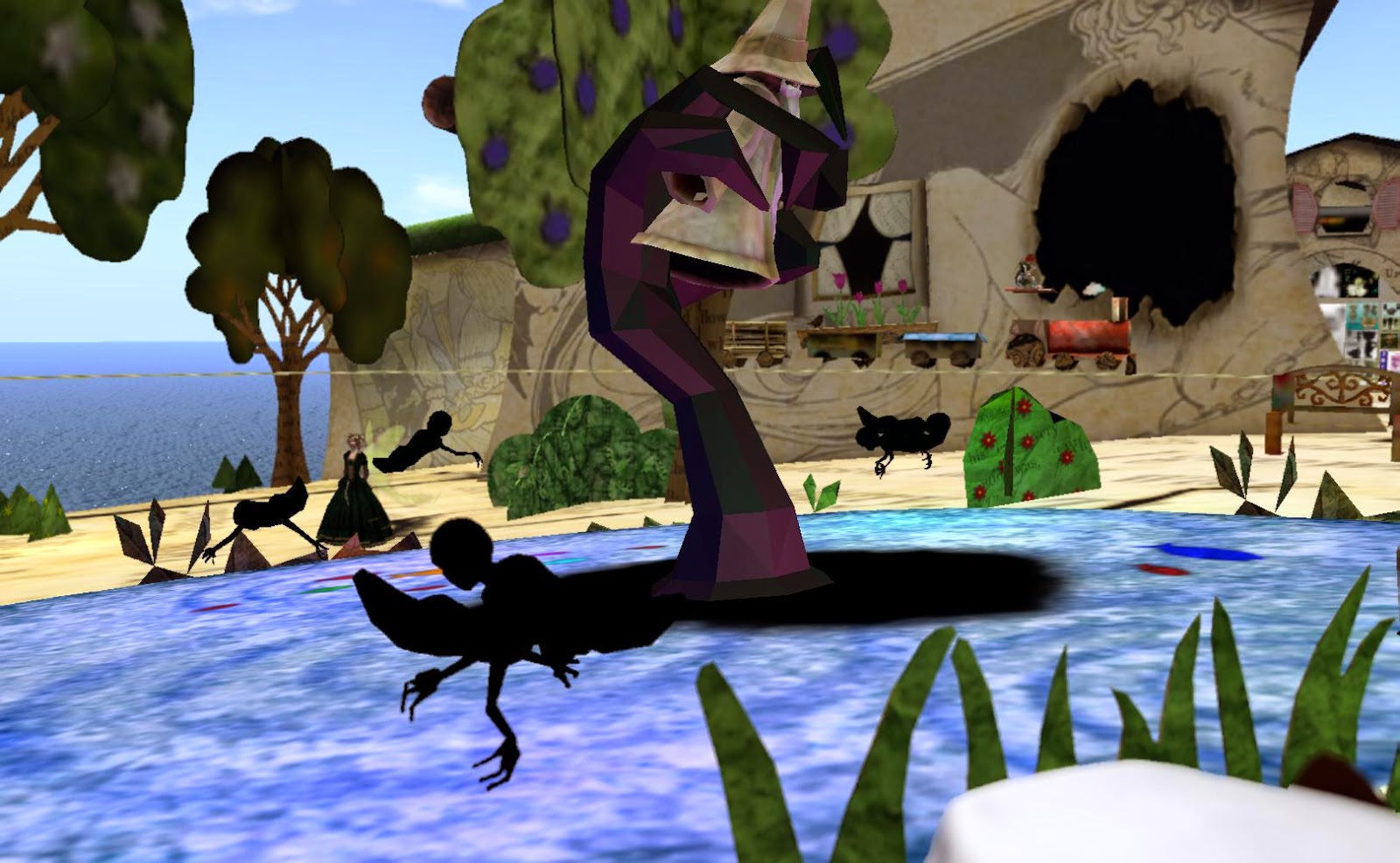 Apparently in the roleplay, a "Wizard of Knowledge" was responsible for chronicling wisdom and facts down, and some dark forces were after him to quite literally steal the knowledge from the people in the area. So they appealed for help. Avariel Falcon, who was there as I TPed in, told, "It's the dark claw of possible doom that is mostly dangerous and needs to be dealt with through charity and dance magic!" 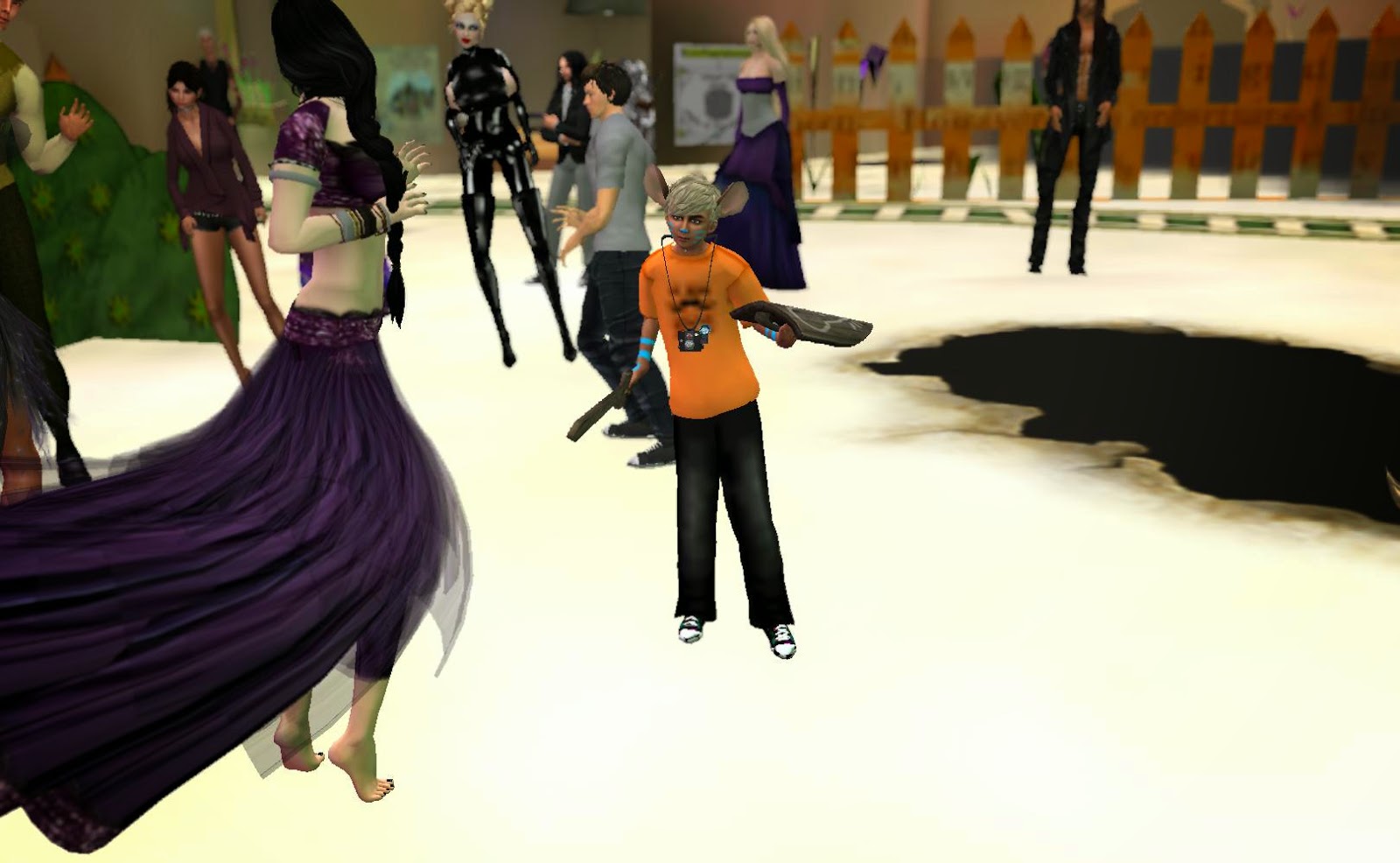 Loki Eliot shouted, "COME TO THE CENTRE OF POPPETBOROUGH AND HELP US RELEASE THE WIZARD FROM THE GRASP OF DARKNESS! PAY THE KIOSK BY THE POND, WE SHALL WEAKEN IT WITH GOOD WILL!"

Loki and a number of others had on looks that made them look like human-sized versions of "The Littles," a cartoon from some years ago. "Look, I'm a Little!" one girl exclamed. But as they weren't a few inches high, they looked more like nezumi or the neko equivalent of mousefolk: human with mouse ears and tail. Another commented, "Maybe I should be my Mouseh fae self." 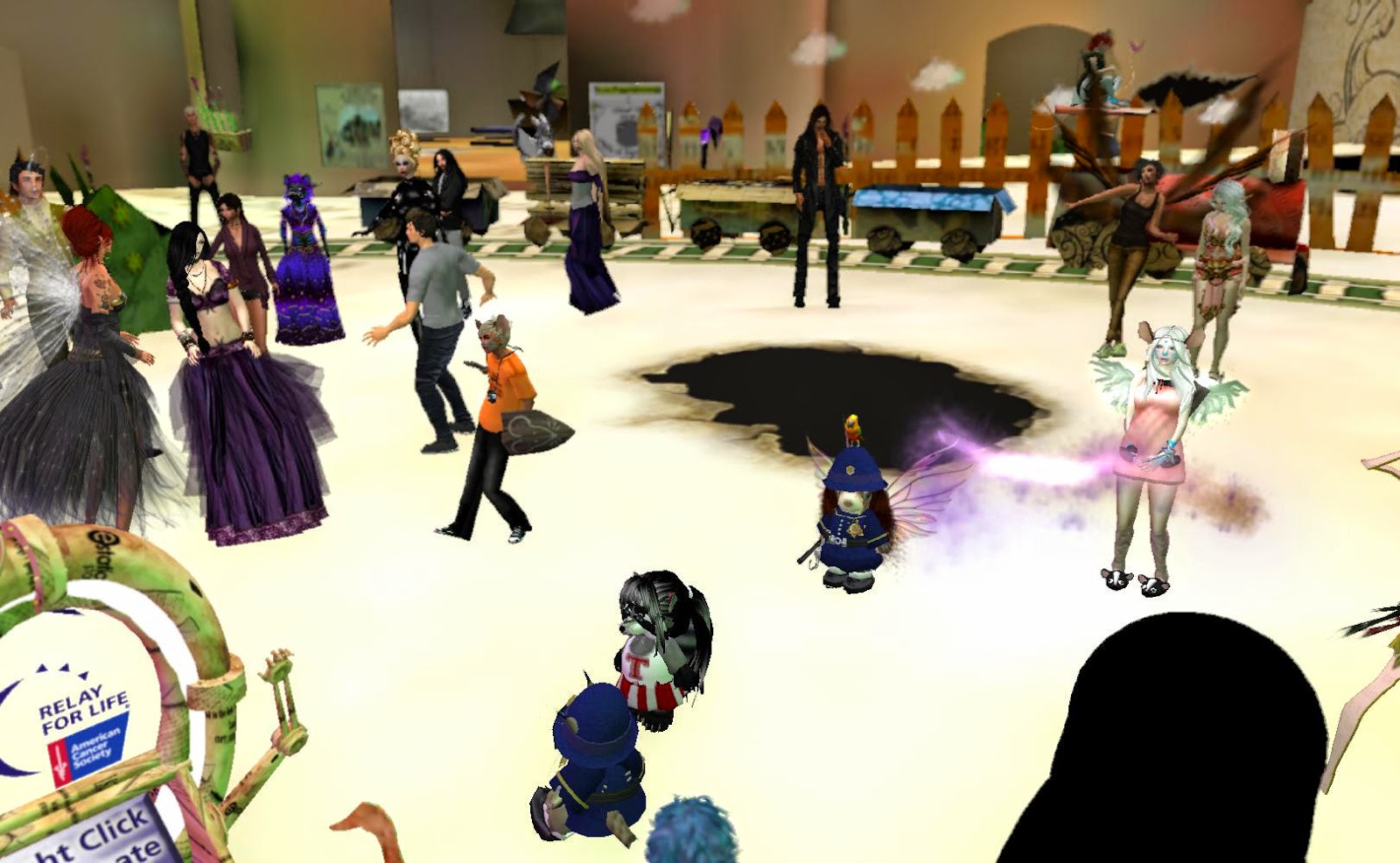 But eventually, they met their fundraising goals and declared victory, "MOUSE GUARDIANS RULE!"

The Mouse Guardians gathered their allies today at Poppetsborough and confronted the evil that had captured the Wizard of Knowledge. Though tiny demons circled about the hand wickedly and darkness fell over the skies of Poppetsborough they had found that charity, sharing, and love weakened and eventually banished the wicked hand that clutched the Wizard of Knowledge. The tears in Poppetsborough have closed and the skies are bright and clear. The Weasels, the Poppets, and everyone extend their thanks to everyone who attended their events and helped raise over 301,000 linden over the ten days to save Poppetsborough and to fund Relay for Life.

Read more on the event on the Fantasy Faire website (link). 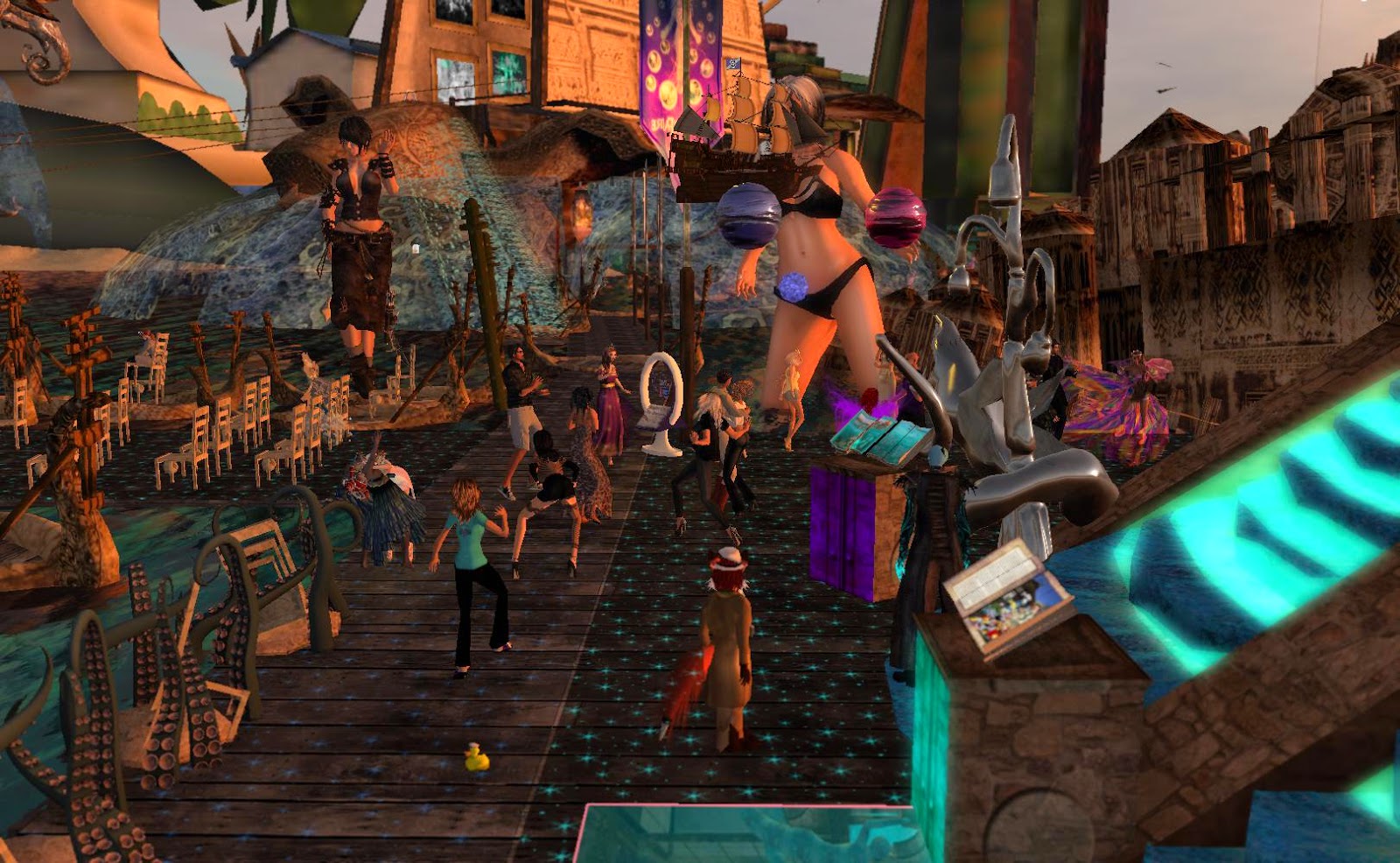 Later on, there was another party at Poseidon's Abyss. 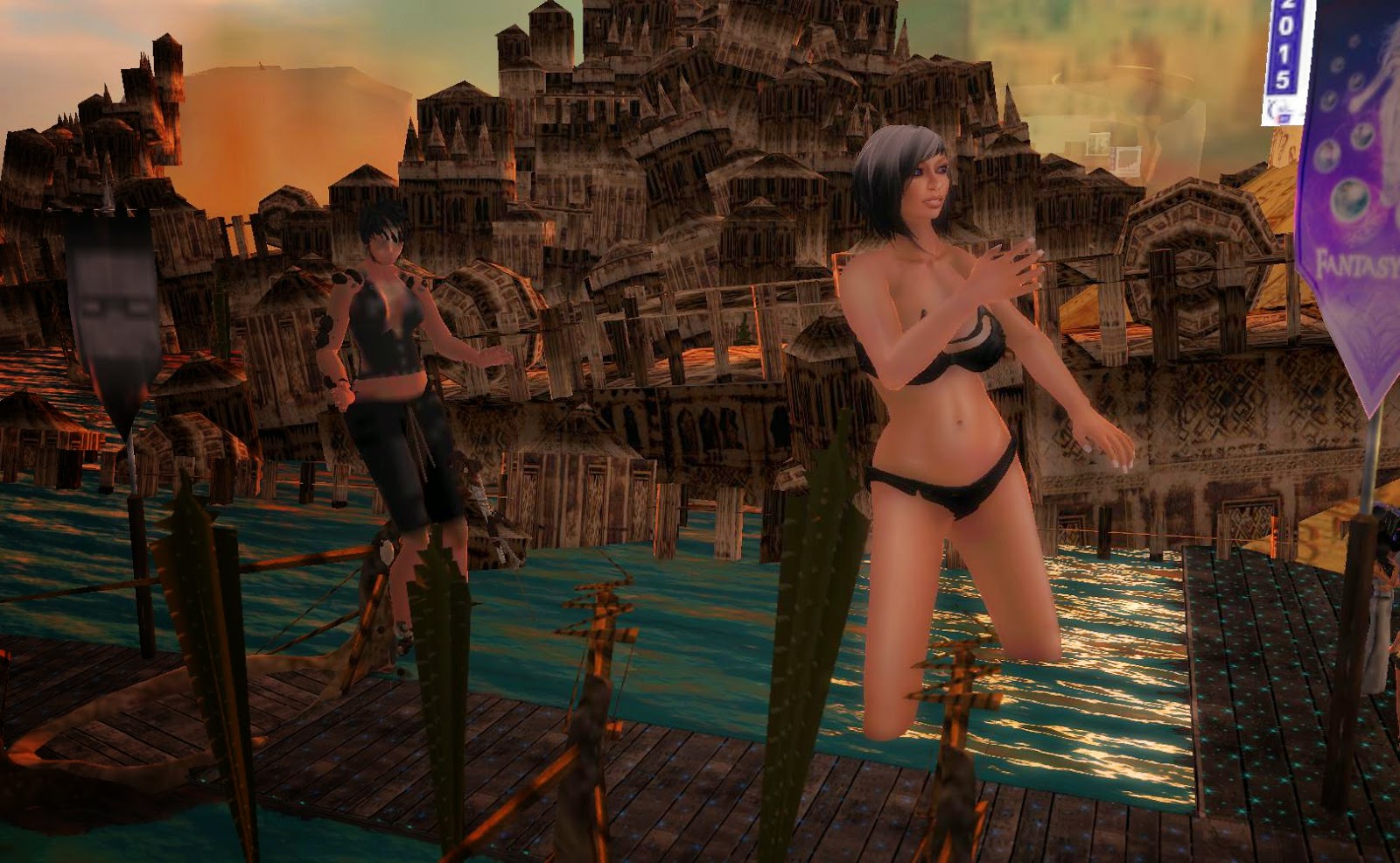 Among the dancers were two giant avatars, or Collossus, by Ceri Quixote. Ceri was the big girl on the right. While they might have a problem in any "Attack on Titan" areas, no one at the party minded them as they were just two more exotic avatars in the mix. 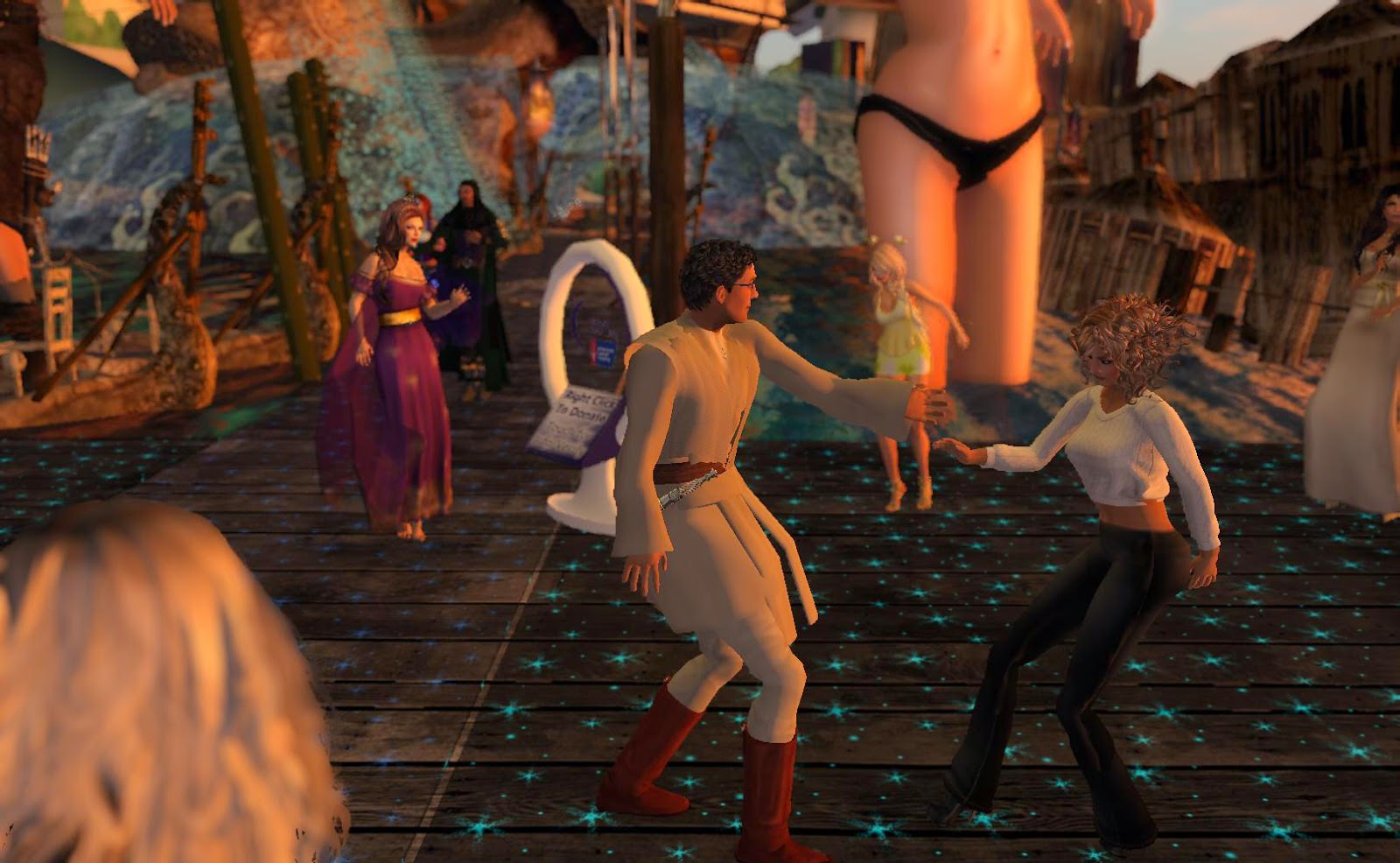 Trader Whiplash of T1 Radio was there in a Star Wars Jedi outfit. No telling if his dance partner asked, "Is that a lightsaber in your pocket, or are you just glad to see me?" 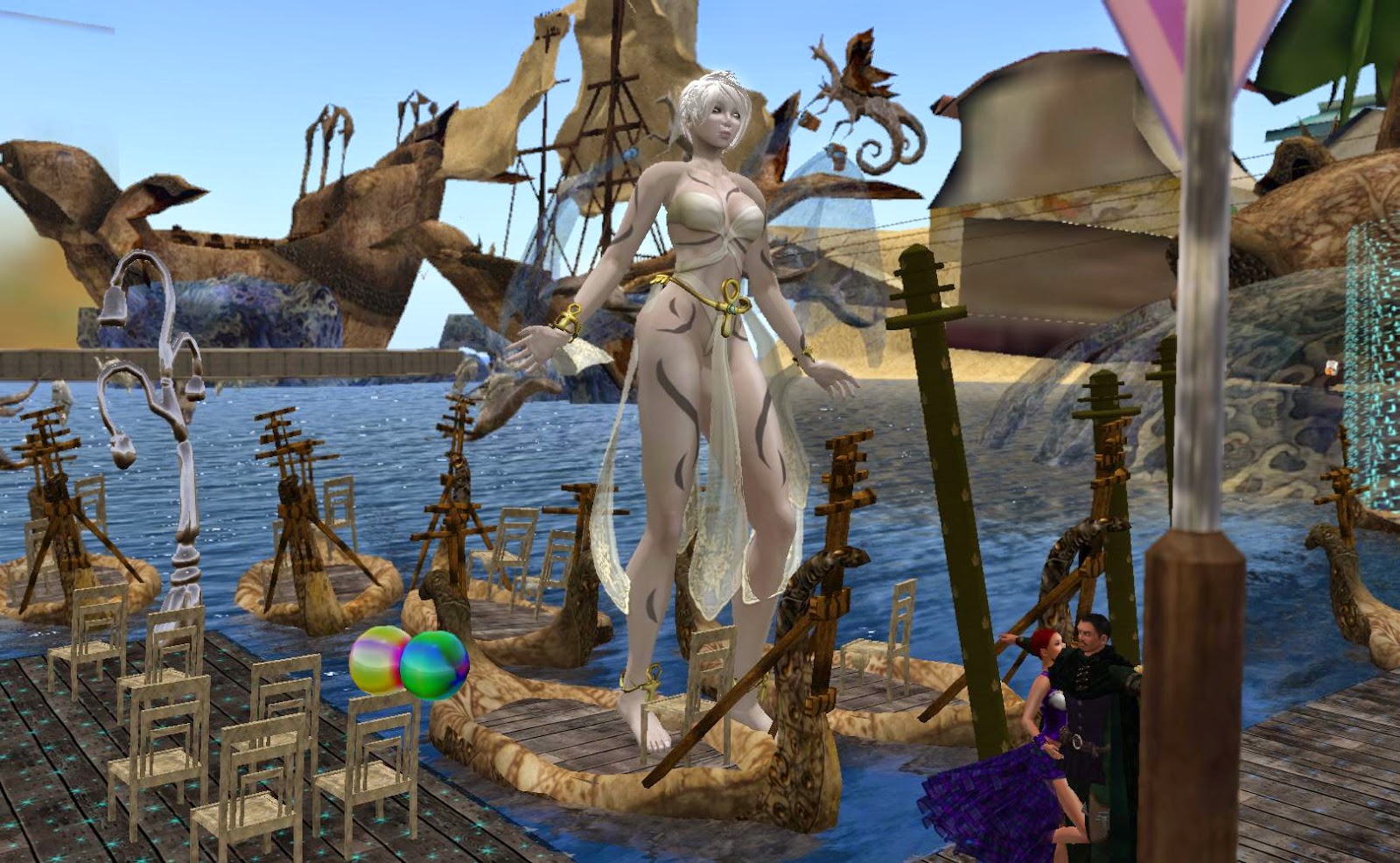 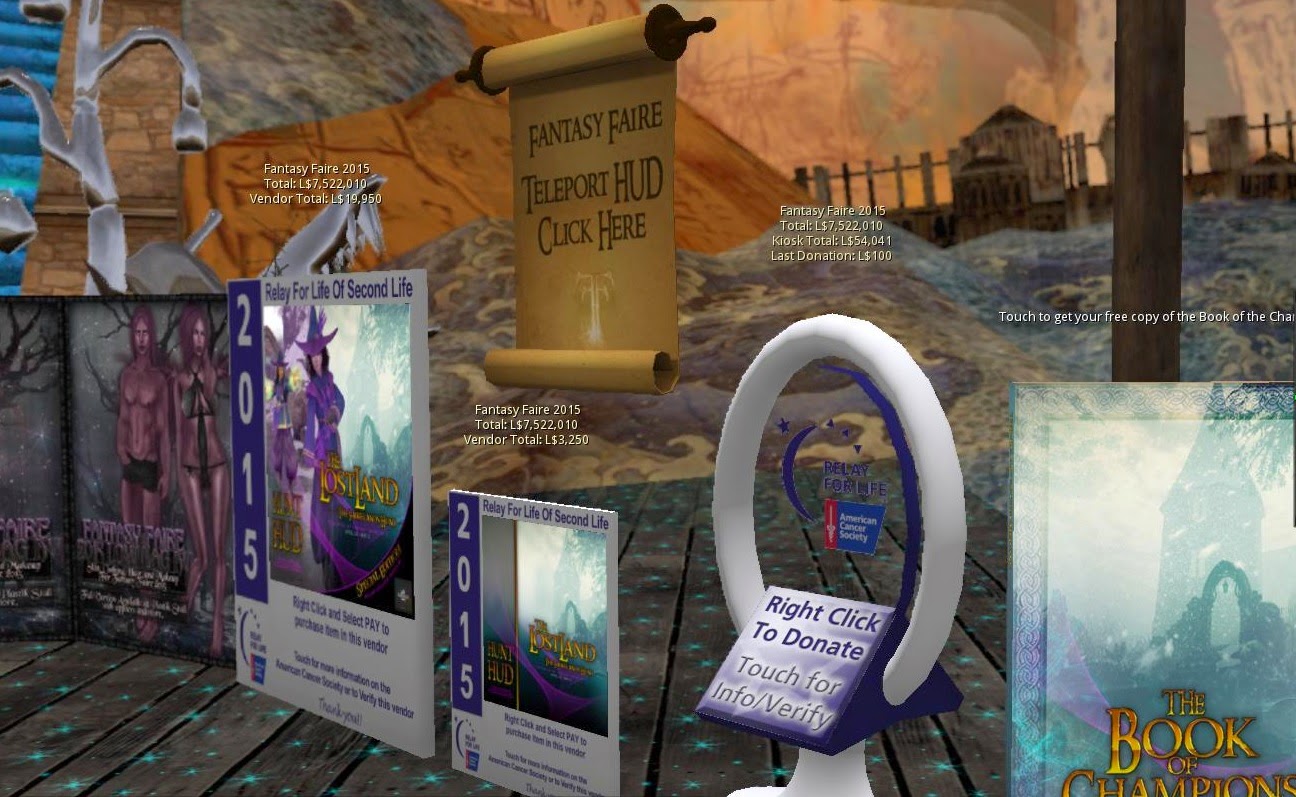 As the party went on, an announcment was made by Random Parr:

NON STOP WOW  Fantasy Fair just hit 30 THOUSAND US Dollars and 7.5 MILLION Lindens in less than 11 days!    A heartfelt Thank You to Zander Greene and Elizabeth Tinsley for all their hard work, To all exhibitors and designers Congratulations and THANK YOU FOR MAKING A DIFFERENCE in our fight against Cancer!

To those of you involved with Fantasy Faire 2015, a very heartfelt thank you and congratulations from the bottom of my heart and soul. You showed the world how we can kick cancer out of the universe! 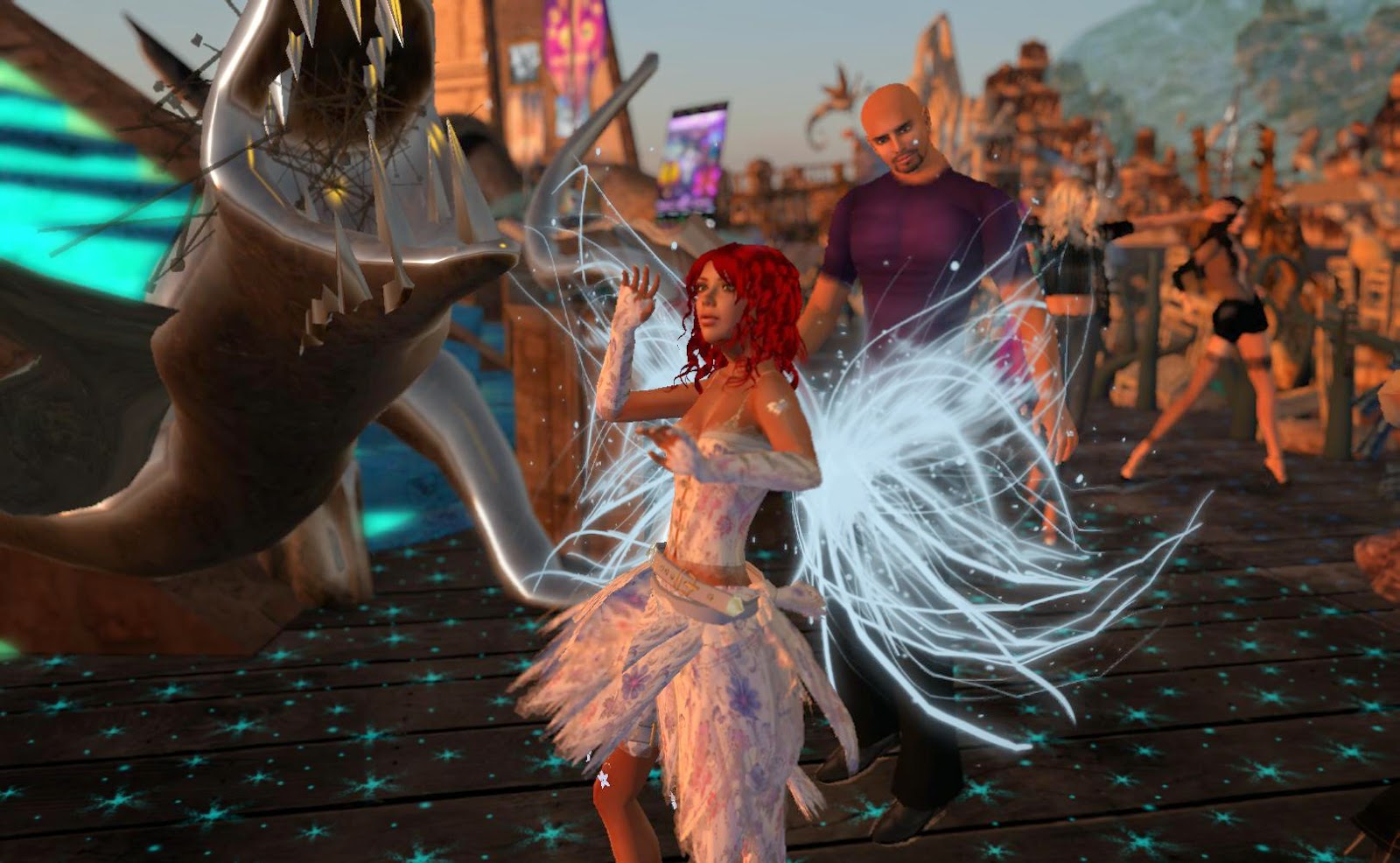 And so, the Fantasy Faire began to wind down, with people continuing to check out the builds across the thirteen sims. Second Life Newser will have some pictures on them later.