In late October, Second Life Newspaper had a new sponsor, the Skybeam Estates. It wasn't long before we had a chance to spotlight the community, their third anniversary on Saturday Nov 14. Among the events that day was the fox hunt. Maybe I was a little close to the subject, but it was the one that I chose to write on, the article going up Tuesday Nov. 17. 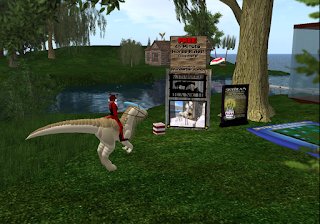 Skybeam had a number of  events to celebrate it’s third anniversary. There was a “Worst Dressed” contest. There was a snail race. There was a spoof of “Wheel of Fortune” called “Wheel of Lindens,” in which I won a hundred L on. But what to me was the most memorable was the fox hunt.

No, they didn’t hunt yours truly. Amethyst Starosin, the Skybeam event manager, and Erix Oh, donned feral fox avatars, purple and red respectively, and volunteered to be the targets. There was also a third fox, Kiwako Snook, whom was the gray decoy. There were free horse mounts available to those whom didn’t have one, but as demos they were no longer redeemable once the player got off them, or 45 minutes had past. Anyone whom wanted the traditional red riding outfit, however, would have to get it themselves. To catch the foxes was a cager, just go in mouselook, aim, and click. 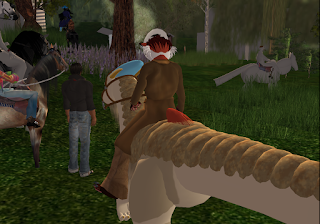 So at 10 AM SL time on Saturday the 14th, people began gathering. My presence led to a few chuckles, not just because of my avatar’s vulpine appearance but also the raptor-like mount I had for a “horse.” But no one tossed a cage at me. It was soon time to give the foxes a head start, and then everyone on horseback charged to capture them, or in my case on raptorback to “rescue” them.

But not surprisingly, I lost sight of them. I had heard all of Skybeam, not just that one sim, were open to the fox hunt. Peaking at the map, there were plenty of green dots here and there, so I wandered about, going through fields, over rocky hills, and by homes. I didn’t think I’d find the foxies, but I was having fun exploring around. 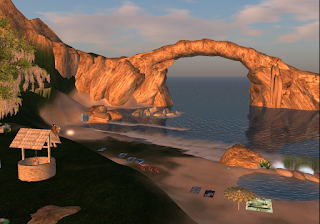 Finally checking the map, I saw that the sim the hunt had stared on suddenly had a mess of green dots. Was it all over. I ported over, expecting to hear that it was. Instead when things were rezzing, I saw people running around, and people shouting, “Some one get her!” The hunt was still on!

To my surprise, the purple fox darted in front of me. I promptly zoomed into mouselook, took aim, and ... nothing! As I had test-fired it once before, I wondered if it was a one-shot weapon, and went back to the starting point to get a new cager. But when I got it and turned my raptor mount around, I heard, “TWIZT GOT HER!!” “Yay Twiz!!” “CONGRATULATIONS TO TWIZT YING FOR CAGING THE ONE THAT COULDN'T BE CAUGHT!!” And so the hunt was over. twists response was simple, “Wow. I didn’t even see the cage.” 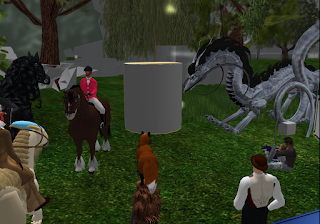 After that was the post chase chatter. Earlier on, Erix Oh had been caged by Neil McCullough. Amethyst had proven much more frustrating, “That was so frustrating having her right there in front of me and not getting her.” “I'm sorry ... but last year Neil had me in like 90 seconds ... this was great.” “Did anybody get a picture of me caging myself?” “... what'd you say, where I ‘rested’ on my sim, hidden in a hollow stump?” (decoy)“I almost morphed dragon a couple of times, just to give a horse a fright. :P ” “Eeeek a dragon!” “Oh my God!  Scarey dragon!” 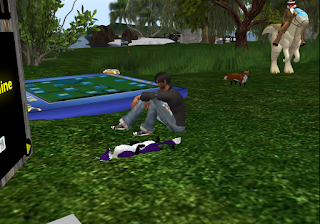 Admist the laughter, there was talk of having another fox hunt in December, and Amythest the purple vixen getting a few belly rubs. And after a while, people soon left for the next event. And so ended the Skybeam Fox Hunt.

Among my furry friends, reaction was a bit mixed. Some thought it odd. Others joked about holding a different kind of fox hunt. Many thought it should be the foxes on horseback and hunting the “hummies.” But there was also one suggestion for a shy human guy being chased by a band of scantily-clad, giggly, vixens.”

This would be the only anniversary of it's new land sponsor Second Life Newspaper would cover, and there would be no fox hunt in December to cover. Still, it was a chance to get a peek of life and times at Skybeam.