By Bixyl Shuftan and Jessicabelle Dayafter

On April 25, there was an Anzac Day ceremony in New Fallout. For those not in the know, Anzac Day is a national day of rememberance in Australia and New Zealand for those who served and died in war. Originally, it was to honor the soldiers of the Ausralian and New Zealand Army Corps (ANZAC) whom died in the Gallipoli Campaign in World War One. The campaign, launched on April 25 1915, was an attempt by France and British Commonwealth forces to both open a warm water supply route to the Russians and capture the Turkish capital of Constantinople (Istanbul). But the campaign faltered, and after several months the Allies withdrew. Among those killed in battle were 8700 Australians and 2700 New Zealanders. The fighting left a strong impact on the soldiers of both countries referred to as the "baptism of fire" of both nations. This year marks the 100 year anniversary of the campaign. ... we celebrate the Anzac day on New Fallout. First we will have the remembrance. After at 7:30 we will have a flight for peace to remember all those who died in war, with the participation of DOR members. During the events we will have a truce and will be forbidden to fight. As well it will be mandatory to use allied uniform or formal clothes. Axis role-players are encouraged to come but we remind they can't wear their uniforms.


Second Life Newser was unable to attend the event, but a transcript was provided of the ceremony, as well as screenshots, by Jessicabelle Dayafter. During this time, the WW2 combat sim grounds were under a truce, so there was no fighting. Anne Warbaum greeted those attending, "Welcome everyone. Thank you for attending this ceremony, of all days in Australia, ANZAC day is most sacred. We remember those who fought, those who served in all wars. We mark the 100th anniversary of ANZAC this year. I remember my Ancestors who stormed ashore at Gallipoli, who charged at 'The Nek' and at Lone Pine and I remember your ancestors, the comrades who fought beside them & the legacy they left that all Australians and New Zealanders do our best to live up to."

Anne concluded the opening, "I will now bring our guest speaker to the podium: Vickster Freiin Von Kuhn." There was applause as Vickster went to the podium. "Good morning and greetings to you all," she greeted the crowd, "Anzac day as you may or may not know, is established on this day firstly to commemorate the landing at Galipoli, which resulted in a terrible battle. The army of Australia and New Zealand, and their allies suffered harshly during that campaign, as did their enemies." 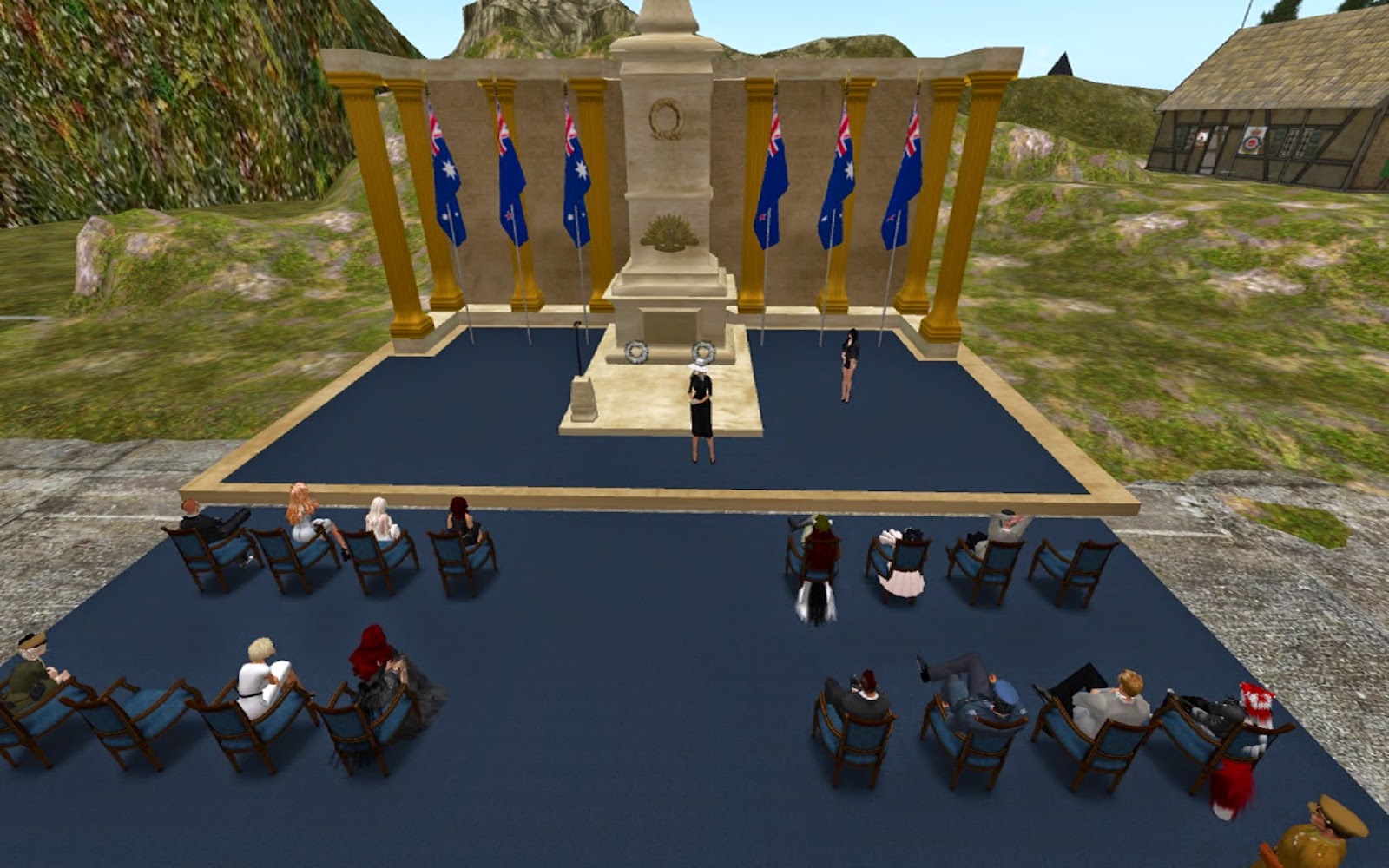 Vickster continued, "But the war went on. And it was a few years later, in northern france, where the Aussies found themselves getting ready for another battle, this time with the Germans. And it was the first time that the Aussies had met the Yanks, who had only recently joined the war. This was in 1918, and the Aussies were battle hardened veterans, the Americans were all green troops. It was an auspicious meeting of forces, and in the preparations for battle, the Aussies had taken a liking to the yanks, and even assisted in their continued training." She paused, "Although they thought it strange how much coffee they drank." The remark was followed by a few chuckles from the audience, as well as a couple remarks of "Mmmmm, coffee."

Vickster went on, "For the coming battle the commander, Lt. Gen John Monash, commanding Australian Corps and Australian Imperial Force also had command of the Americans....," she paused with a smile, "sort of. General 'Blackjack' Pershing commanding the American contingent was desperate to maintain oversight of the Americans, and intended to act rather as an equal, which would play later. The Americans themeselves, out of their element, fighting with English and French gear and armor."

Vickster, "In any case, the Americans, on the day of battle, were ordered back by their general. And it seemed the Aussies would have to go it alone, when something rather amazing happened. Several American units, commanders, officers and troops, refused to stay out of battle and joined with their Australian brothers on the field. Now I can tell you this was a terrible battle, and fast-paced due to the brilliant planning by General Monash, and his professional officers and men. But there is a fact in war, and that fact is no battle has ever gone to plan." She gave a short chuckle, "It was that battle which sealed a sort of common and shared history of the people Australia, New Zealand, and America, and a respect for the bravery and sacrifice of all those who left their safe countries to the benefit of all people in a time of war."

Vickster continued, "Because of who we are, and where we come from, there are lessons we must learn from the past. War isn't a good thing. No soldier who ever witnessed battle could ever say they love it. But there are bonds of love born of those times that can be stronger than anything born in peace. We know, God knows, those boys in the end were there to save each other, the boys on both sides. It is right and good to honor the dead of all wars, all sides, even the supposedly unjust wars, because soldiers don't sacrifice themselves for ideologies, they risk all so that someone else won't have to suffer, and to save their friends. When those Americans saw the brave aussies they so admired disappearing into clouds of dust and smoke, they could not turn their backs and march away."

Vickster went on, "The battle was won. The price of victory: 1400 killed for the Allies, 2000 for the Germans. The true cost for any battle cannot be calculated. The war was soon over, and the Americans and Aussies and the Germans went home, and people tried to pick up their shattered lives. But the sacrifices of that day saved lives. And the sacrifices they made are forever remembered. And remember too those who didn't die. They risked all and were delivered by the grace of God. Every war is different, but also the same. And those boys are our boys, all of them. In closing, I can say only this, God Bless the boys of 1918."

And with a "Thank you" from Vickster, there was applause from the gathering. Anne then continued, "The prayer today is the 46th Psalm, some call it the soldiers' prayer."

Anne then told the prayer, "God is our refuge and strength. Therefore we will not fear, though the earth be removed, and though the mountains be carried into the midst of the sea. Though the waters roar and be troubled, though the mountains shake. There is a river, the streams whereof shall make glad the city of God, the holy place of the most High. The heathen raged, the kingdoms were moved, He uttered his voice, the earth melted. The LORD of hosts is with us. Come, behold the works of the LORD, what desolations he hath made in the earth. He maketh wars to cease unto the end of the earth. He breaketh the bow, and cutteth the spear in sunder. I will be exalted among the heathen, I will be exalted in the earth. The LORD of hosts is with us."

Anne went on, "I will now recite the Uniform Resolution. This meeting reaffirms its admiration of the magnificent heroism, self-sacrifice and endurance of the Sailors, Soldiers, Airmen & Nursing Sisters of Australia & New Zealand who, on the first ANZAC Day and throughout the Great War of 1914–18, conferred a glory on Australia & New Zealand that will never fade. This Meeting avers that the lofty ideals of service of the ANZACs pervaded the dauntless spirit of Australia’s gallant sons and daughters who, during a period of six years of fierce and intensive warfare on land, on sea, and in the air, from 1939 to 1945 gave such heroic and self-sacrificing service in the cause of liberty. The same lofty ideals of service were exemplified in Korea, Malaya, Borneo, Vietnam Iraq, Afghanistan and every other place around the globe where peacekeeping, peacemaking and the fight against terrorism take our servicemen and women."

"This Meeting voices its heartfelt sympathy with the relatives of those who, during these wars and conflicts, made the supreme sacrifice, and with those who have suffered on behalf of the Commonwealth. The Meeting gives its assurance that those who have fallen shall be held in sacred memory, and that those who have survived the perils of war will ever be honoured and remembered with gratitude by the people whose hearths and homes they went forth to save so that our freedom and our free institutions under the Commonwealth of Nations might survive."

"On the 100th anniversary of the immortal landings at Gallipoli, this Meeting of Citizens expresses its loyalty and devotion to the person of Her Majesty Queen Elizabeth the 2nd and to the Commonwealth of Nations. Please be upstanding for the ODE."

"They shall grow not old, as we that are left grow old"
"Age shall not weary them, nor the years condemn"
"At the going down of the sun and in the morning"
"We will remember them" 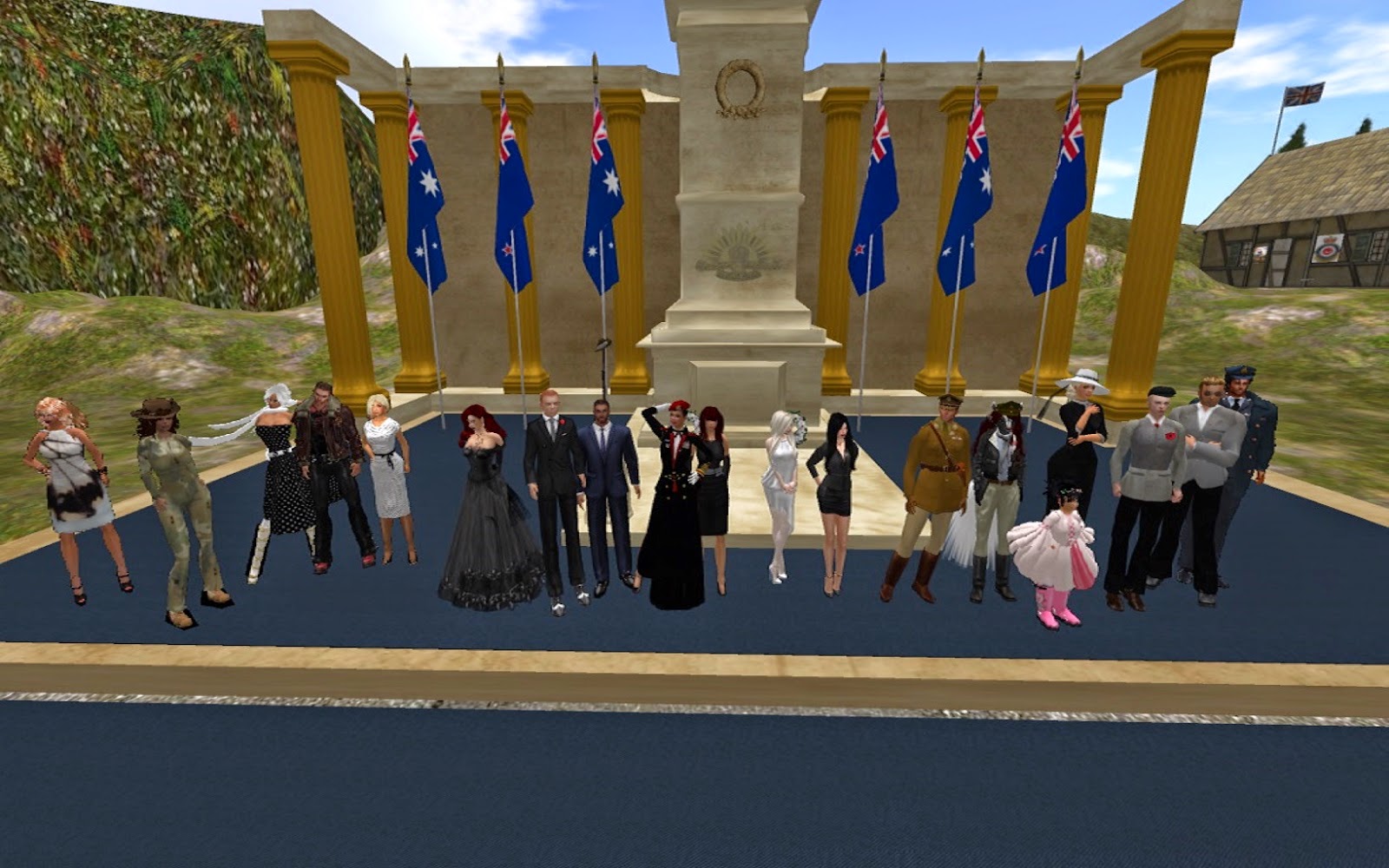 Everyone in the audience spoke, "Lest we forget." Someone added, "You guys ain't forgot in a hundred years. Prolly ain't gunna ferget." Vickster turned her way, "We'll tan your hide and you won't forget for a hundred years (name)." "But I didn't do anything, yet." Anne went on, "Let us now observe 1 minute of sacred silence. Please take your seats." The gathering of people did, and for the minute, nothing was spoke.

After the moment of silence, Anne went on, "At the end of WW1 it was decided the horses of the ALH would not be brought home. They would go to the British Army or be sold locally in the Middle East. any could not abide this decision that seemed to them a betrayal of their horses. The Light Horsemen who loved their brave chargers led their horses out into the desert. After the crack of a rifle shot they would return alone, many in tears. The poem today reflects their feelings." 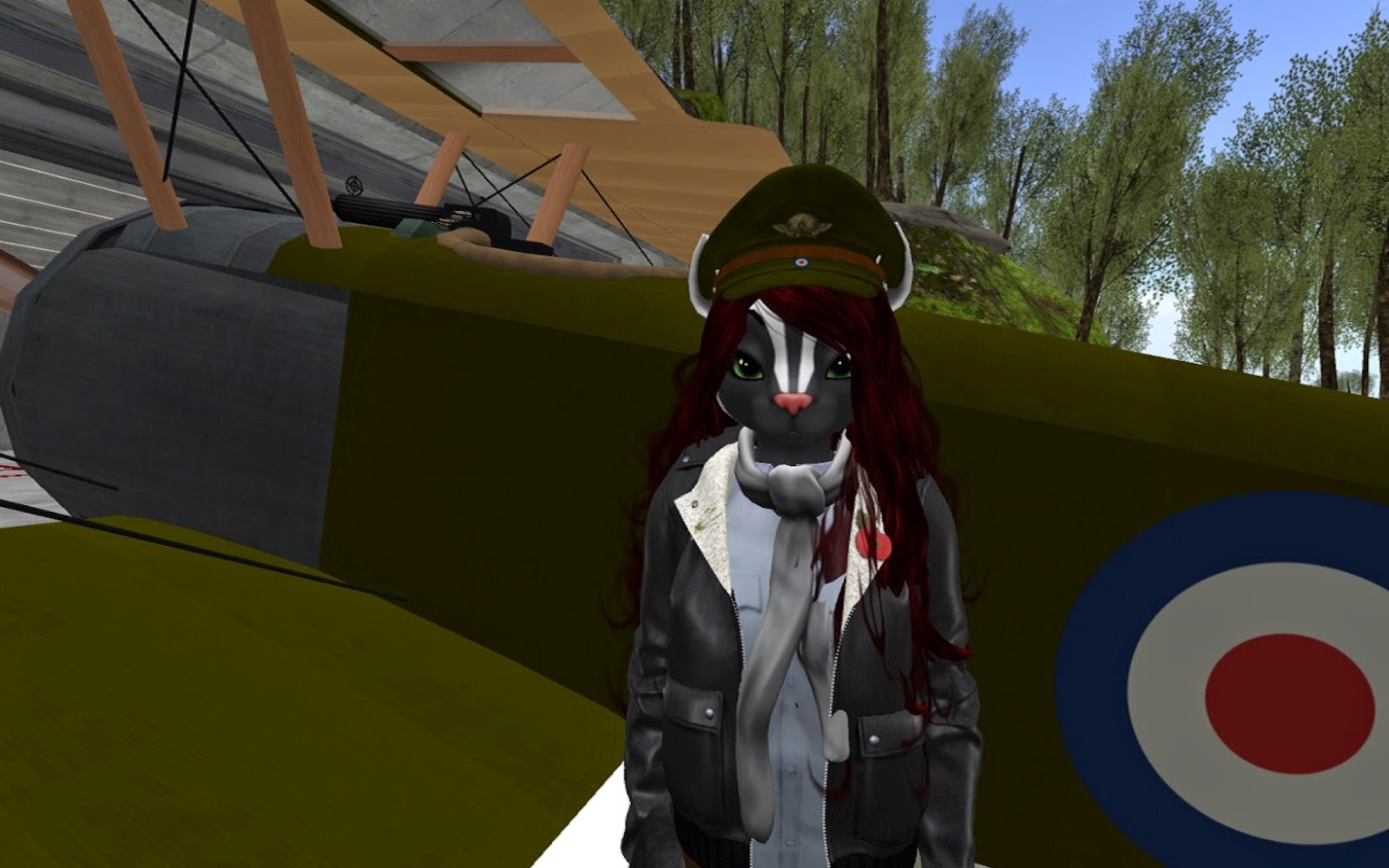 She went on with the poem, "The Horses Stay Behind."

"In days to come we'll wander west and cross the range again,

"We'll hear the bush birds singing in the green trees after rain,

"We'll canter through the Mitchell grass and breast the bracing wind,

"But we'll have other horses. Our chargers stay behind.

"Around the fire at night we'll yarn about old Sinai,

"We'll fight our battles o'er again, and as the days go by,

"There'll be old mates to greet us and the bush girls will be kind.

"Still our thoughts will often wander to the horses left behind.

"I don't think l could stand the thought of my fancy hack,

Just crawling 'round old Cairo with a 'Gyppo on his back.

"Perhaps some English tourist out in Palestine, may find my broken hearted Waler with a wooden plough behind.

"No; I think l'd better shoot him and tell a little lie,

"'He floundered in a wombat hole and then lay down to die.'

"Maybe l'll get court-martialled, but l'm damned if l'm inclined,

"To go back to Australia and  leave my horse behind.

Anne then thanked the gathering, "Thankyou for your attendance here today. Thank you for honouring this special day of days, the 100TH Anniversary of ANZAC." The people then applaued. 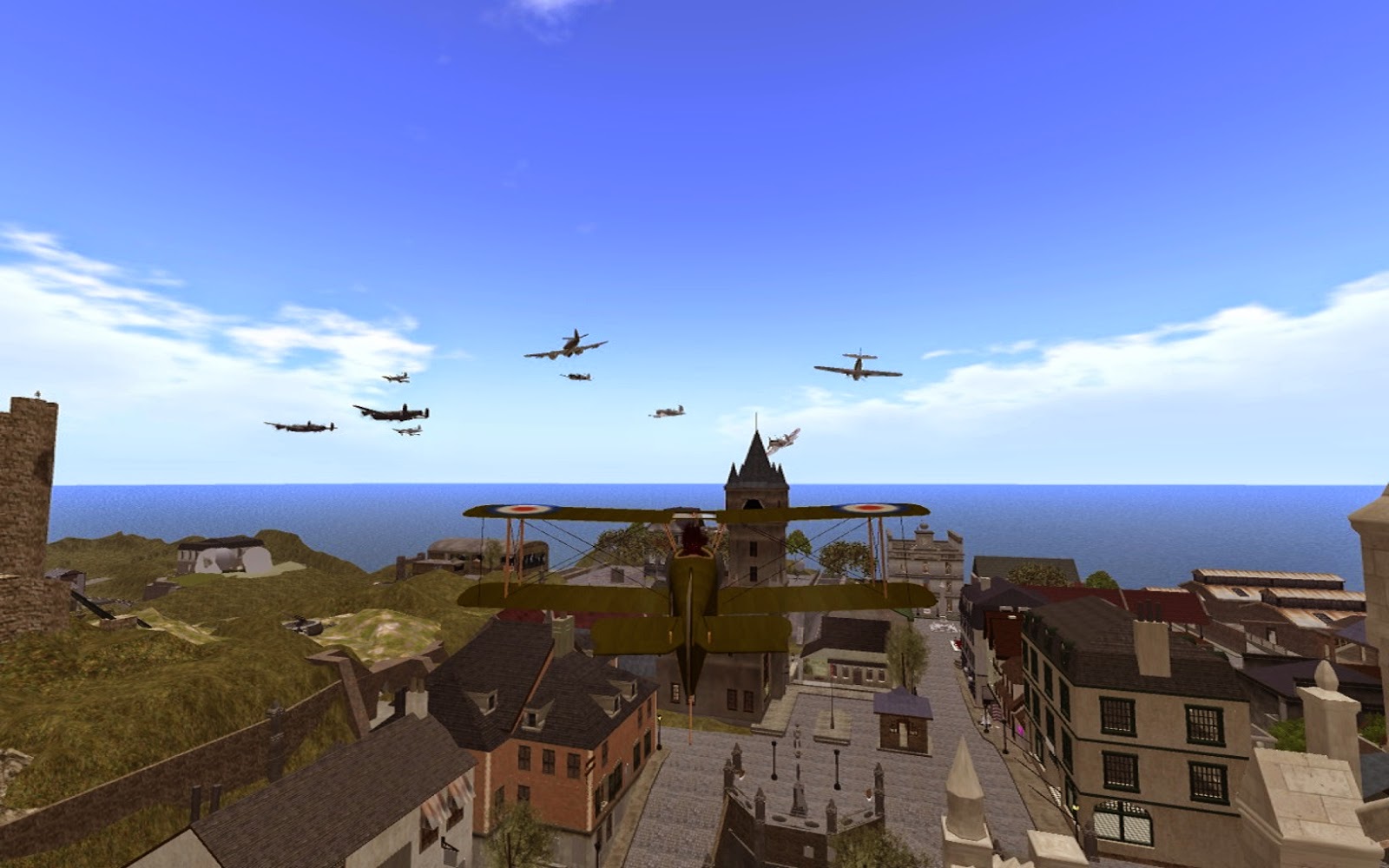 Afterwards, there was an honorary flyover of aircraft. Most were Second World War, but Jessicabelle Dayafter flew up in a British biplane, presumable a Sopwith Camel.

Eventually, the ceremonies were over, and the combat resumed. But still, no one was forgeting those whom were honored that day.