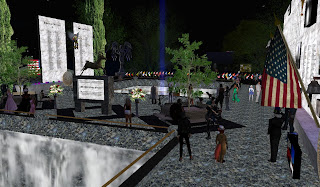 Fourteen years after the deadliest terrorist attack on American soil, September 11 is still marked by rememberances in both real life and Second Life. Some of the more impressive memorials in the past are no longer in the virtual world. Still, there are others. A grand memorial to the fallen still stands at Stagg Island. Two events were held at the location. One was at 6PM SL time.

I dropped in about the same time a teacher did with a few child avatars, "Okay class, this sim it has a wall that has the names of the fallen (last I heard) there are some displays around, there is a new area that has a real nice display as well. Take a look around but don't get lost as there are many people here." Others here were dressed as firemen and soldiers. 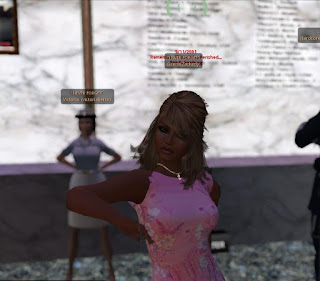 As I and others stood around, looking around at the scenery, notably the large wall of names, we could overhear news footage of the attack on the Twin Towers. Geena Zackerly, the owner of Stagg Island, gave a narration, "A live television broadcast that we all watched that day , a very comprehensive description of the events of the day. NBC 9/11/01 Compilation of news coverage. End of the Today Show news coverage. As the day progressed every human being felt the need to arm themselves, protect their families, friends, their property and their neighbors. Not really knowing why this happened, who was behind it, why so many innocent people had to die in such a horrible way, for what reason?? How could this act be justified ?? by anyone?? With no valid answer to any of those questions all there was to feel was 'vengeance.' Someone will pay for this!"

Others also made comments, "Respects to all that lost...and to those that survived..........is the will of mankind and the heart of us left behing to always remeber...the loved ones...and the family's...and not the ignorance of the world...." "Well said." "I lost my class." "Rest in Peace, heroes." *salutes*

Geena continued, "The world realizes that this tragedy not only effects the families of those taken , but strikes at each person, it has touched us all!! We are all saddened! We have all been violated! Victims family's reach for their loved ones... praying they made it through everything. Hoping against all hope that they survived. Our hearts have been hardened and desensitized to everyday life. Reality is more than we can bare. Every day life will never be the same as we knew it. The shock, the pain that all of us have to deal with as to what has happened to our nation, our brothers and sisters, fathers and mothers, children and neighbors.....our very existence!" 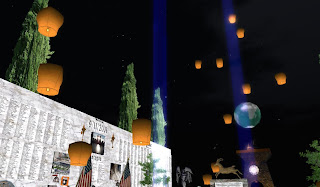 As these words were spoken, paper lanterns appeared, with small flames at the bottoms, and began floating into the air. A woman told her child, "Sweetie stand by Mommy, watch the lanterns." A man openly wished "he could call his lil sister." He was comforted by others. One spoke, "I miss muh uncle Tom and my Cousin Mike Collins, they were brave firemen ( sittin' in tears as this was played at there funeral )." One lady looked upwards, "For all my Marine friends and Navy shipmates" *kisses her hand and blows it to the sky*. Not all comments were in respect to the fallen, one cursing what he saw as the incompetence of the leaders in Washington. 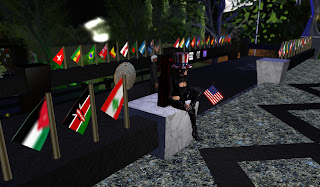 Geena went on with her narration, "Only time will reveal what is going to happen. Will this happen to us again? Have we learned to protect ourselves against evil in the world? Will we become complacent... let our guard down? Who can say? Only time!! It is our duty and our responsibility to those we lost to do everything in our power to prevent this from ever happening again. Let us hope for a strong nation and better times as we honor our loved ones in their peaceful rest. A senseless act like this reminds us all that our lives are just a drop of water in a large ocean. At any given time we or our loved ones can be gone, So hold those you love close, EVERYDAY, for tomorrow may never come."

The others continued, the ones as solders standing at attention, some others shedding tears, "Hello brother." "Welcome to the Memorial Brother." "This really means a lot ,,,,and says alot for our USA." "Just an awesome Memorial, thank you Fazz for putting this all together." 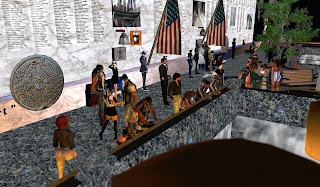 Geena came to the last parts of her words, "The time has come to accept what has happened... it isn't a nightmare... it's real! We are mad , we want vengeance, someone has to be held responsible for these horrible acts. On the other hand however, our innocents... our family members, our loved ones are free now. Free from the human suffering brought on to them from these evil people. It's time to let go of their physical beings and embrace their spirits." With a glance to the soldiers, "Our Honor guard will now Play a final tribute to our fallen." She then read from a notedcard, "Notes from the Memorial Creator: The music you have heard may very well mean something different to you. However I offered you music that I felt best portrayed the feelings of the heart and emotions of the day. The bottom line is these beautiful spirits will never be forgotten by me. Like you, that day has been burned into my memory! I would like to thank you all for your donations to the memorial. This memorial has been dedicated as a permanent landmark for all Second Life residents to visit. Your donations help to assure its permanence. Thank you for attending the 2015 9/11 tribute, Be well and peace be with you !! ~~ Fazio Magic." 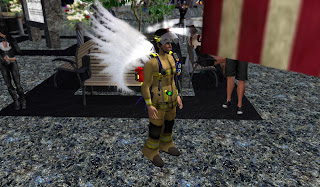 It was now a little past 7PM SL time, and the ceremony came to a close, Genna saying, "Thank you all for your kind wishes and donations to the 911 Memorial. This memorial has been dedicated to all Second Life residents. It will be here for you always. So glad you all came. Please stay as long as you like." Visitors expressed their thanks, "Thank you so much, Geena." "Awesome place, congrats to who ever made this. You in the honor guard I salute you." Genna would also notice me, sending me an instant message thanking the Newser for the article about the 9/11 Memorials that morning. 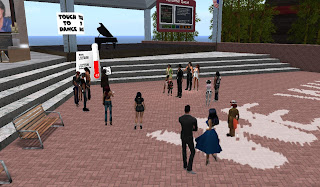 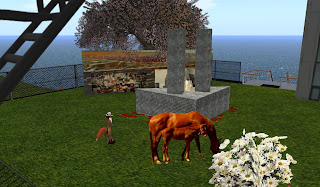 Stag Island was not the only place 9/11 memorial events would be held. McCoy Island would also hold its own that day. I dropped in a little late when the last musician had finished his performance. Several people were still around, including sim owner April McCoy whom thanked the Newser for mentioning her memorial that morning.

There was memorial which the Newser had failed to mention, that of it's local fire station at Sunweaver Bay. It's still up for people to see at Sunweaver Bay (57, 177, 32).

Of Aero Pines' Stairclimb Tribute that was up for a few years but wasn't set up this year, Gemma Cleanslate had a few words with the park owner Cindy Bolero. She explained events in real life, as well as the threat of griefers had simply made it impossible to provide the experience they once had, "The Co-Producer/builder and myself have both recently lost our dads and we've each been busy with family affairs in Real Life.  The tribute also became too much work and expense where much of the labor involved a full crew to protect the remembrance visitors from the Islamic griefers and other anti-Americans."

The good news, Cindy Bolero has been working on an Opensim version of Aero Pines, and plans to have a lasting Stairclimb Tribute there. She will announce when it is ready.