On December 12, the Sunweaver community found out that one of their own, Rypanthian Abilene, known simply as "Panth" to friends, had passed away. He had died a couple days before without warning from a heart attack, and his brother had logged on to give his friends the bad news. For many, it was simply sad news. But for his partner Felina Fermi, it was devastating. The two had been partnered for ten years in Second Life, and she had known him online for a total of fifteen. 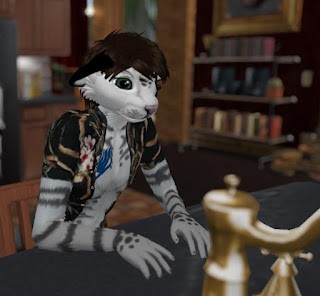 Yours truly knew Panth since 2008 when we were neighbors at a short-lived estate that lasted for just several weeks. Not many words were exchanged between he and I though as he let his partner and my friend Felina talk. She did some music around the time of her early years in Second Life, but was especially proud of her detailed houses, getting an article in JamesT Juno's Second Life Newspaper as "The Primmiest House in Second Life?" The place had a lot of little items, down to paper wads next to the trash can, and pet cats running/sleeping/playing about. They would once again make news, this time for the Newser, when Felina converted one room to a theater. But Panth never would say very much. He would just sit on the couch and cuddle with his partner. He and Felina were briefly part of a MLP roleplay, he taking on the role of "Big Mac," whose vocabulary tended to be limited to one word responses, "Yep" and "Nope." 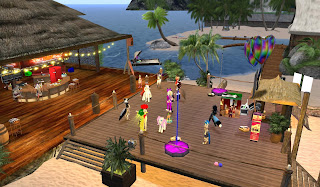 While Panth may have been silent, he was the one who was paying for his and Felina's house. And his demise left her without means to pay for the place. In response, Nydia, who had called of her rezzday party in response to Panth's death, began organizing an event in her honor after Dusk Griswold suggested one. This one would cover the day and much of the night, going on Tuesday December 15 from Noon Second Life time to 8PM. The event would take place at Nydia's Happy Vixen beach club in Purrfection.

Today from Noon to 8 PM, we are going to be raising Lindens for Felina as we remember Panth and share our memories of him. We will always miss him, but he will live on in our hearts forever. 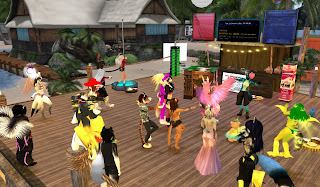 The normal tip jars were not used that day. Instead, residents were invited to contribute to a cube with pictures of Panth and Felina. The money would go to help pay for Felina's land tier.

Nydia and Dusk were among those DJing that day. Others did so as well, Tantari Kim did for a while with her set, narrating the tunes with texted lyrics and a few facts about the songs. Shockwave Yarreach entertained the crowd with a set that included a few parodies he himself came up with. Dusk Griswold did a number of classic rock tunes. Rose Redfoxx (Rose Evans) finished the set with more modern fare. 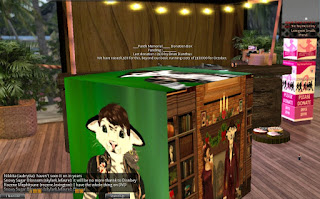 Quite a number showed up to at the event. Felina came, honored with all the attention, along with Tigerclaw, a mutual friend of both she and Panth. Nydia thought she counted thirty-one at the club at one point, though there were more as people dropped in as others left when real life called.

As the event went on, the donations kept coming in. These included 2,000 Linden dollars from Marusame Arai, and 5,000 Linden dollars from Kryxia Silverfall. Rita Mariner, the Sunweaver chieftess, announced Felina's next tier was considered paid in full, so the donations would go to the next month. But the donations kept coming. Near the end of the event, it was announced thirty thousand Lindens had been raised to help take care of Felina's tier.

But the money was only part of the story. The Sunweavers realize Rypanthian's departure leaves a hole in his partner Felina's life that can never truly ever be filled. But they could and did show they valued her as a friend, and there would always be a place for her her among them.

Rest in peace Rypanthian. Until we meet again, you'll be remembered.