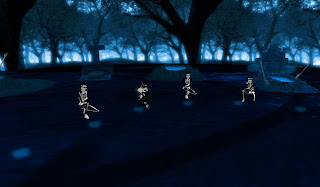 On Sunday December 6, I was invited by Whisper Fairy Gravois (Jihan Wonder) to a show at Kindness Park, about a thousand meters over the Napa Valley sim. Much of the chat I saw was in French, as well as the name on the stage, "Le Spectacle de Martina."

The stage scenes were sometimes well detailed, the first act being an interpretation of Michael Jackson's "Thriller," taking place in a graveyard with dancing skeletons. This was followed by several other acts, including a dancer in a Japanese garden, and a circus act with elephant avatars. I would hear donations to the event went to the Mark V. Lee Memorial Fund. 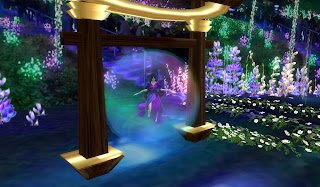 I would later talk to Whisper a few days after the event. I asked about the Mark V. Lee Memorial Fund, and she told me, "He  was a 9/11 responder who died last year from complications from that. He was a big volunteer in real life, especially during  the holidays. He gave all, his body, and more, to the childrens burn unit. It's a legitimate real-life fund. His family took it over. They've even been on TV and talk shows. Hasbro donated to the fund last year."

"He gave the biggest donation, his life, eyes, cornea, etc. Amazing gifts. He was my cousin, and he made me promise to help. So I did this charity event. I will do something else as well. ... He was a big giver in real life, and knew I was doing things here. He encouraged me, said that was whatlife is, paying it forward to help each other get through things." 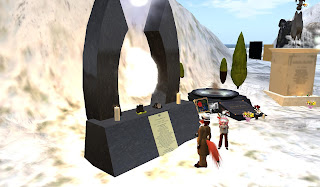 Whisper took me to Mark Lee's memorial, which wasn't far from Salem De White's (Selene Spellhunter), "His daughter,Christina Lee, said this about him on the day of 9/11, 'My dad actually left his shift, on way home saw the plane hit the tower in his rear-view and turned right around back to his fire house, suited up and went."

Whisper also told me of two links of interest. One was of the Facebook page of the Mark Lee Memorial Fund. The other was a video of a TV news story about it.

Whisper went on to say she was working on a place in Kindness Park, something to help out newcomers, especially newcomer kid avatars, whom were looking for new places to go to in Second Life, commenting many were looking for something beyond the club scene. The land was being paid for by friends of hers and general donations. The location of the building is at Napa Valley (127, 145, 1000).

It's very likely we'll be hearing more about Whisper and Kindness Park before too long.