Thanksgiving doesn't get much attention compared to Christmas. That stores seem to start their Xmas shopping season once Halloween is over hasn't helped. Still, there were a number of events that went on Thanksgiving week and weekend. 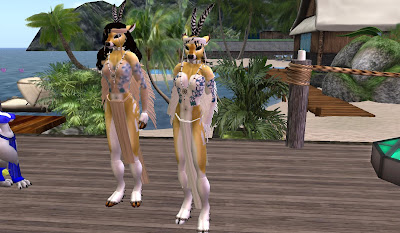 The Happy Vixen club held it's themed event, Pilgrims and Indians, a week before Thanksgiving on the 19th. Cutlass would have it's Thanksgiving party one day before, on the 25th. 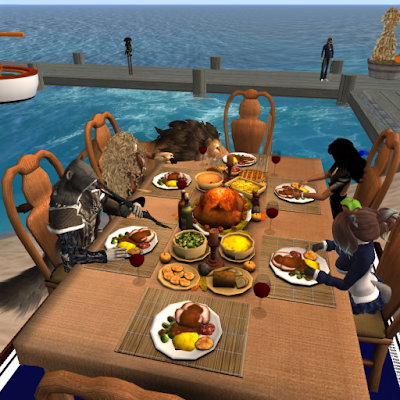 On Thanksgiving Day, Gemma Cleanslate celebrated by having some friends over at her place at Skye Condos. Plenty of turkey for all. 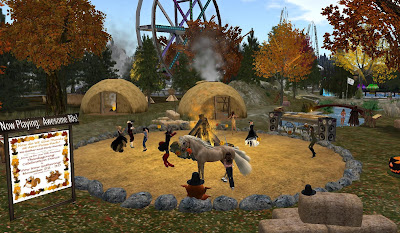 Aero Pines Park had an all-day Thanksgiving event, their Harvest Festival and Pow-Wow, with people, some in American Indian and Pilgrim outfits, dancing around a fire. 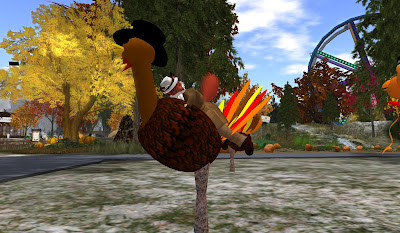 There were other things to do, such as the mechanical turkeys, in which like mechanical bulls, you were timed to see how long you could keep a hold of it. 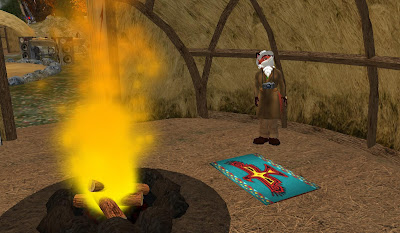 There was also fishing, or one could peek in the Indian lodges. 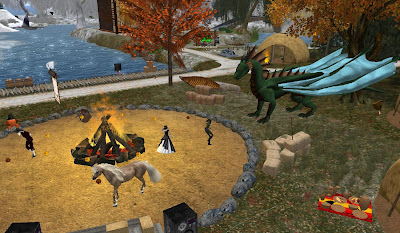 At one point, a dragon dropped by. For a moment, I wondered if it might want horse for a Thanksgiving dinner. But instead, it just listened to the music for a few minutes, then flew off. 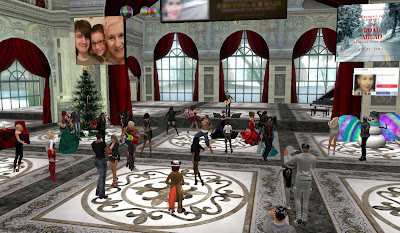 While not a Thanksgiving themed event, the fundraiser for Kalli Birman (Brandy Maltas in real life) on Friday evening drew plenty of attention with it's kickoff. TerryLynn Melody and Seth Regan (Mankind Tracer) performed live for the crowd. The event would raise many hundreds of dollars 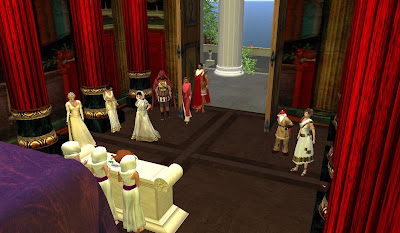 Saturday November 28 was the start of the Roman community's monthly festival. First was a roleplayed ceremony at the Temple of Jupiter. Perhaps not the most Thanksgiving like of events, but afterwards was the "Feast of Jupiter," which had lots of food next to the dance floor. 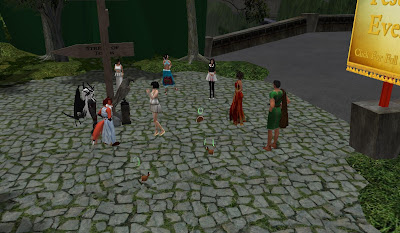 Following a chariot race, the third event of the day fit perfectly with Thanksgiving: the Turkey Hunt. Three volunteers donned tiny turkey avatars, and with the promise of a prize for those who could tag all three, several residents, locals and visitors, went after them. Among those who got all three was a certain vulpine, leading to jokes about how foxes have a natural affinity to taking down poultry. 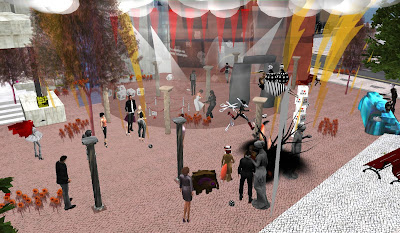 Also on Saturday November 28 was the "Life Seems to be Normal" event by Kikas Babenco and Marmaduke Arado.  An interactive art show, those coming by to watch were invited to take part. A prankster (or griefer, depending on your opinion) tried to disrupt the show, but the event went on. 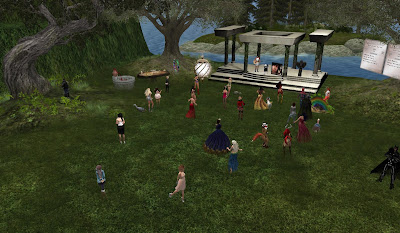 Sunday November 29 was the second day of the Roman festival. At 10 AM was the Lectica Race, which was of teams driving litters. I wasn't able to attend that one, but did make "Jupiter's Grand Feast at 12 Noon. The theme of the party was "Modern Gods and Goddesses." The plurality of those dressing were in superhero outfits (maybe they saw the movie "Hancock," in which there was a comparison made). 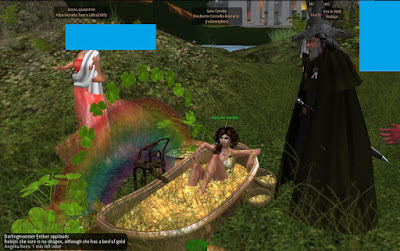 The winners were Ronijn Resident, who came as Merlin the Magician, and Rasberia Cornelia Daciana (Raspberrykiss) whom was in a tub of golden coins as the "Goddess of Fortune." Unfortunately for Rasberia, one of the turkeys at the event kept walking over to her tub, "Shoo turkey! Go away!" Maybe the bird mistook the gold for feed. 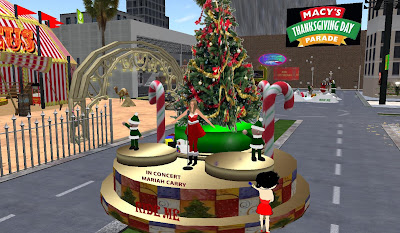 And what would Thanksgiving Day be without a parade? At New Las Vegas in the Isle de Casanova sim, there was a tribute to Macy's Thanksgiving Day Parade. From Thursday to Sunday at Midnight, floats went down the street. 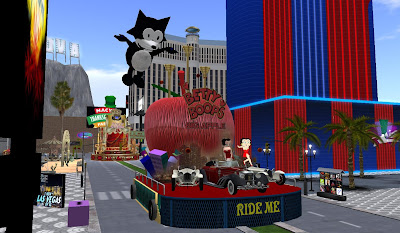 I dropped by to get a few pictures. One thing I noticed was the floats were designed for residents to ride, on, and one, a "SheilaDDulySweet" in a "Betty Boop" av was hoping on them, sometimes singing a line or two, "Yay my parade! *smiles big* Tee-hee-hee-hee! Boop-Boop-De-Doop-Boop!" 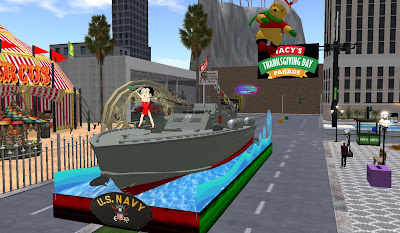 It was quite a fun-filled Thanksgiving weekend. Stay tuned for Christmas.