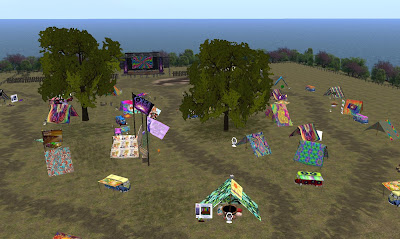 On Saturday May 22 and Sunday 23, the "Relaystock" in Second Life took place in the Relay dAlliez sim, with some unplanned parties taking place on Friday May 21. The third of what has become an annual event in the Relay for Life's season, the event is a tribute to the 1969 "Woodstock" festival, considered by a number to be a major pop-culture event in history. 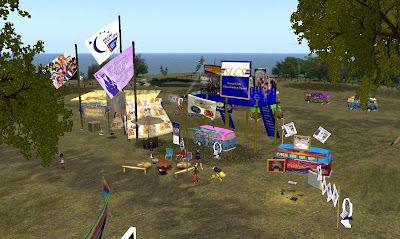 Although organized by Trader Whiplash and the Relay Rockers team, it is a multi-team event where multiple teams sign up for campsites, either a tent or a van done up in 60s colors and patters, and for hour to 90 minute long periods on stage for live musicians and DJs representing them. 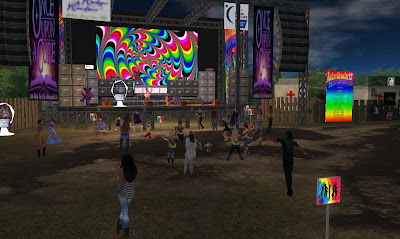 The event was set up in the Relay dAlliez sim. Unlike the "Three days of sex, drugs, and rock n' roll," however, being an official Relay event there was no sex, and this being virtual reality there were no drugs (although there were a few jokes that if Tuna Oddfellow was performing some would be getting high). But there was plenty of great classic rock n' roll music by the various DJs and live musicians on stage. 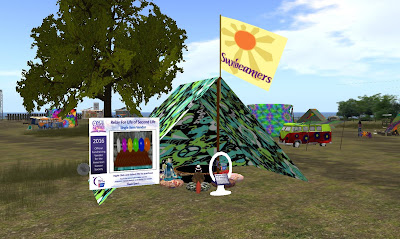 Among the teams there was the Sunbeamers, whom had a tent. One of our numbers whom was around at the time commented that the tents at the real Woodstock were much plainer, for those whom brought tents at all as most just brought a sleeping bad or nothing at all. But the design was all in the name of fun, some Relayers born much later chucking at the designs. 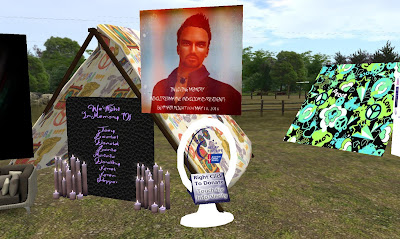 There was one sad detail, Nikoli Redmayne of Team Spirit of Sherwood Forest had been murdered when his plane was lost in what is believed to be an act of terrorism. His Relay team put up a picture of him for others to remember his contribution to the team and the Relay. 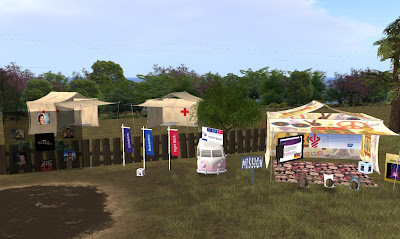 There was a hospital tent, where some information about the Relay for Life's mission was available for newcomers dropping in. 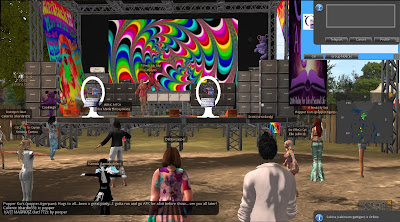 There were a number of musicians each day (click here for the schedule). Those earlier in the day had smaller numbers watching. 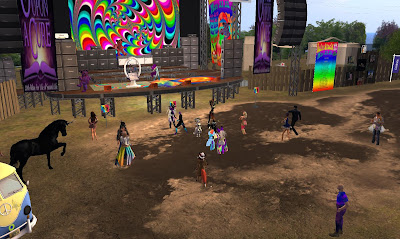 But as time went on, more people would drop in. 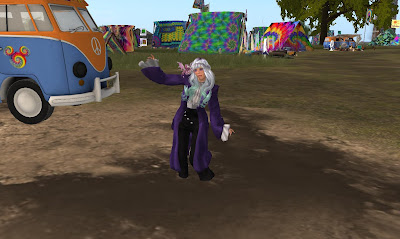 With the mud, many were ankle deep while dancing away, though didn't seem to mind. 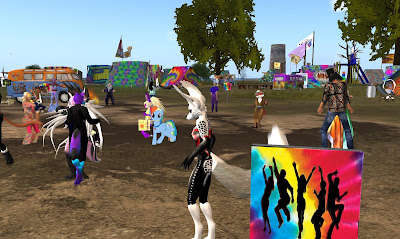 Those dropping in for a little music and dance came in all varieties of avatars from normal human to pixie, to tiny, to furred, to pony, to children, and a certain dark unicorn. 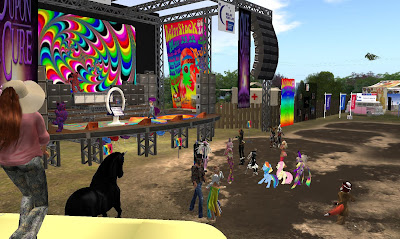 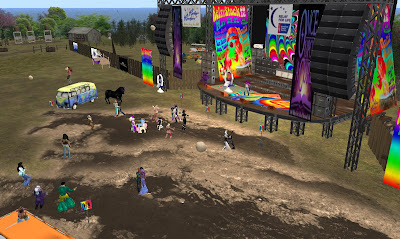 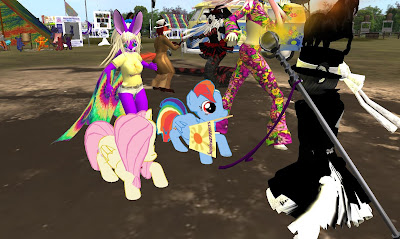 Rita Mariner and some of Team Sunbeamers were there, the team coming out of it's slump. and would reach Gold about a month later. 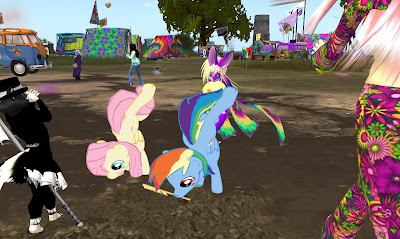 The weekend would see the team nearly doubling it's total raised so far this year, 50,000 coming from one donor. The Sunbeamers would reach Gold almost a month later. 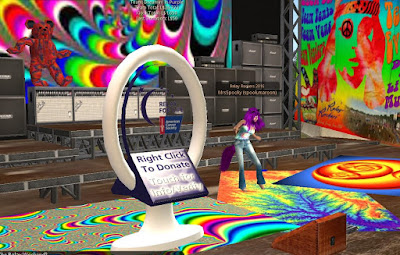 Among the musicians there was DJ MrsSpooky (Spook Maroon). 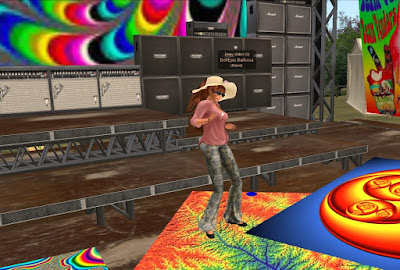 After her was Dolleyes Barbosa, whom started her hour as describing the 60s as an adventurous time with the Civil Rights movement, the space program, and of course rock music. 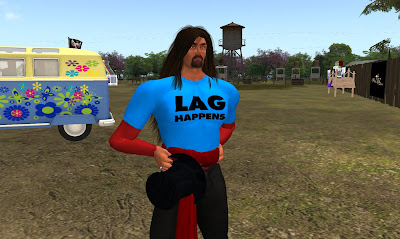 With large numbers of avatars, some had problems with slow to rezz objects and other technical difficulties. Some such as this fellow made the best of things with a little humor. 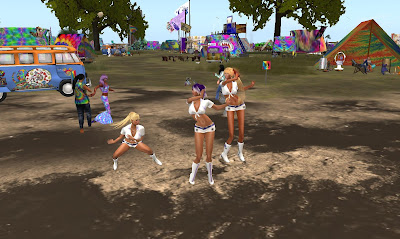 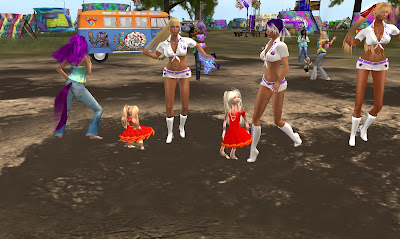 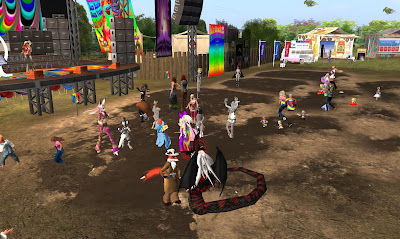 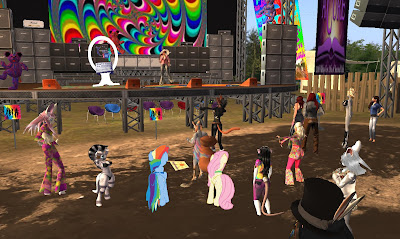 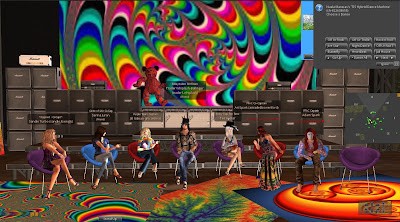 At 3:30 PM was the Relay Rap, with the Committee members on stage. 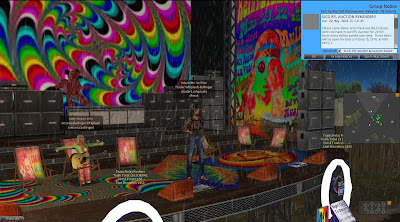 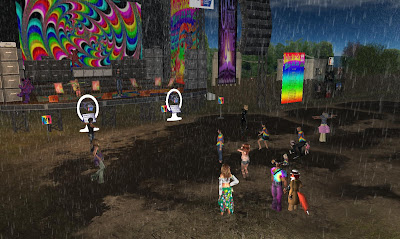 It was that moment the rain started up again. 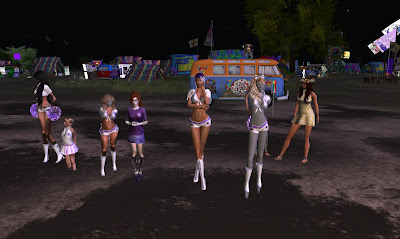 But eventually, it would stop.