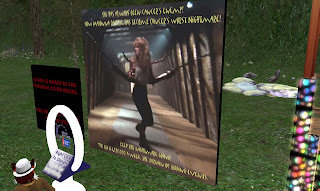 Avatar challenges are nothing new for the Relay for Life in Second Life."Bid Me Bald" has been fairly popular among Relay teams for several years. Others have come up over the years from "Bid Me Human" in teams with furs, "Bid Me Biggie" among tinies, "Bid Me Pink" being a recent one for the Sunbeamer Team. But Madonna Daehlie, best known for taking part in Relay events, such as her DJing, in her distinctive rubber suit and tall blonde hair, took her avatar challenge to a new, and somewhat disturbing, direction: her "Bid a Nightmare to End a Nightmare" for Team Shadow.

Madonna has been injected with something awful and it gave her cockroach  arms like the woman/creature from "Nightmare on Elm street." What was the mad woman in the sweater said? "Live a nightmare to end a nightmare like cancer." So 20K for each week you wanna see Madonna bugged out cockroach style .We need to cure cancer more than Madonna needs human arms so let's put cancer in a roach motel and make Madonna creepy crawly to benefit Relay. Let's really BUG cancer. 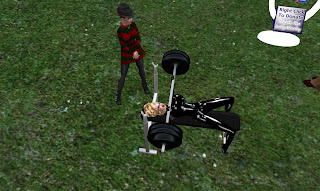 The day of the event was July 5. I dropped by the Silver Creek sim where it was taking place.
Team Shadow. Madonna herself, the effects of the mutagen not having quite taken effect, yet, was bench pressing weights. Looking her over in a "Freddy Krugger" outfit was Rhea (rheata). Oldesoul Eldemar wasn't far away, and on stage were Gem Sunkiller and Sasha Fairywren along with Peter Savage (petersmith) and Shadow (victor.jaggernov), playing some tunes.

"Just in time Bixyl," Gem told me, "(It's) happening now." Rhea then told hold of Madonna's barbell, pressing on it, "Remember that shot I gave you some weeks back?" Madonna grunted as she struggled with the additional force on the weights. Rhea continued, "Well, that little beauty reactivates with exercise. Remember what I said about living a nightmare to end the nightmare of cancer?" Madonna nodded, looking fearful. Rhea then took hold of the barbell, and flung it aside with what seemed like impossible strength, "The nightmare starts now and lasts as long as the bidders have paid for. That's nine weeks with at least one more donations coming." 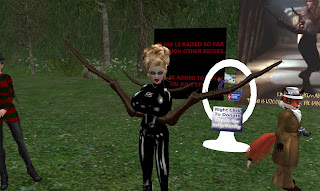 As the band changed their music to the theme of "Phantom of the Opera," Rhea shoved Madonna upright, and the transformation began, her arms turning lengthening and developing hard exoskeleton and barbs, resembling the limbs of a cockroach, "Eeeeeeek!! Owwwwwwww! Hey, Sis? We have a crazy woman on this team!" Sasha shuddered, "Look out, Madonna!" then after a pause, "Ohh my gaaahd ! She looks like a Nightmare!" The girl in the rubber suit looked herself over, "Geez, this is one hell of a makeover!" Looking at Sasha, "Well, uhhh, Sissy.. Thank goodness there's no tambourine in this song.. I couldn't play a tambourine now."

Commenting over a certain line in the "Phantom" song, Sasha commented, "Power over you? Yeahhhh. And I don't think ,it's all inside your mind.. looks like it's pretty much outside you, Sis." Madonna blushed and noded.. "I'd say so..." Peter commented, "Whoaaaa! Ya def gonna bug cancer, Mady.  And ya fightin' back. Daaamn."

In total, the "Nightmare" fundraiser took in 180,350 for Team Shadow

"Thank you again - for tonight, and all your help the last 6 weeks."