What is a Jam Tart Ball?

Here we have a fabulous success story about Relay for Life of Second Life (RFL of SL). This time from the Aether Chrononauts/TinySteps team of the Steamlands. 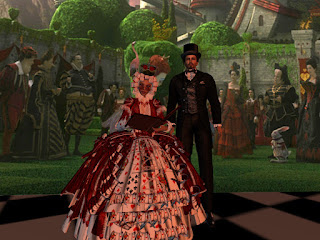 The Jam Tart Ball in it's 6th year of raising awareness and funds for cancer research. It was held in the Guvnah's Mansion on the region of Caledon Victoria City. The event raised nearly L$17,000 during the day's event.

Some 6 years ago in 2011 when Patty Poppy was Captain of Team Caledon, she came up with the idea of the Alice in Wonderland themed event which was a fabulous success even its first year. She has planned, hosted and DJ'd it every year since, save for one year when real-life got in the way. One of the successes of this event is the fact that there are two events on Jam Tart day: One at 1pm and one at 7pm SL time. This gives the Euros and the America's both a chance to participate. The other reason for the success is that it gives SLers a chance to really create their costume and participate intimately with the environment created for the event. 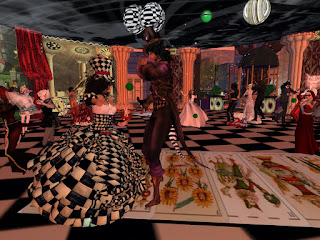 Attendees find the most creative costumes imaginable for this dress up masquerade party. The décor is clearly that of the Alice books and movies. The music was in theme as well and focused on the Alice movies; tunes that clearly implicated the fantasy theme of rabbits, underground, hookah smoking caterpillars, cats and other interpretations of this party theme. All genres of music was played including electro swing, classic soft rock, contemporary and old world music; even a couple Dr. Demento tunes like “They're Coming To Take Me Away!”


Attendees were from across the globe with more Europeans at the early edition and more North Americans at the evening edition.

The Independent State of Caledon (AKA Caledon) is owned by Desmond Shang,Guvnah. Caledon just celebrated its 10th year in SL. The Caledon theme is Victorian/Steampunk and boasts 31 sims of this steamlands area of Second Life. When you visit expect to meet persons who are respectful and courteous as were the Victorians. Caledon is also home of the new resident rezzing and learning center, Caledon Oxbridge University though it is operated as a separate entity.

Visit Caledon at this location:  http://maps.secondlife.com/secondlife/Caledon%20Victoria%20City/128/128/2