For a long time ZZ Studios has been around Second Life as a creator of adult videos and more created by Cindy Babii and her group of talented actors and actresses. But there’s more than just adult entertainment to ZZ Studios. Darkefur Fraker, one of the long time actresses and builders for the studio, organized a car show open to the public. Cars just like in real life and also in Second Life are amazing things to drive in as well as admire for fine craftsmanship in virtual reality and also the real world. Cars add to the spirit of life in America or any country. 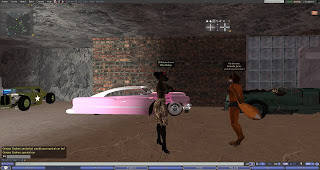 The ZZ Studios car show was for three days at their location at Sheridan (68/104/2501) . I visited there on Saturday. I found Dakota Lyle (Kota) who’s been with ZZ for a while and she had this to say, "Well, it's been a traditional event for ZZ for at least the last six or seven years.  Car show and motorcycle show. Darke is the vehicle enthusiast so she kind of organizes all of these.  Every one we have has gotten a bigger and bigger turnout."

"Darke" was the nickname of  Darkefur Fraker. I met up with and joked with her. She also has other interests. I remarked, "Yeah I heard she likes other things too but it's awesome she loves cars." Dakota grinned, "Yea, ponies beware." 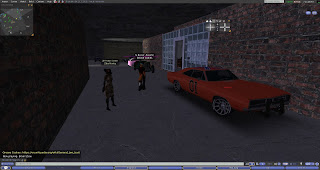 Another SL celebrity showed up helped me out, the ever retro hyena Ziba Roxley. She showed me Darkefur’s car the pink car behind her. At first I asked was it her car. She said she wished. However Ziba dreams of a special car, a 1956 Buick Centurion, and she showed me this link (picture). It wasn’t a car in reality quite yet, but Ziba said if she had the Linden or real life money she would certainly buy it.

One of the cars at the show that caught my attention was the General Lee from the show “Dukes of Hazzard" that I remember as a little kid. For those who don’t know about The Dukes of Hazzard check out the car here ( https://en.wikipedia.org/wiki/General_Lee_(car) ). There were also sports cars and I saw a military vehicle and a retro Volkswagen van. 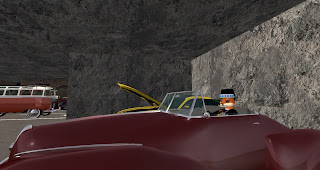 To add more to the car show of ZZ, I added my own car, a Regalla. I was joking with Dakota Lyle that I told her what a bad driver I am. She also called my car lovely. I laughed and said it’s a James Bond type car and said I’m “Coakes….Grease Coakes." She laughed and said, "You have the perfect name."

Cars capture the imagination of everyone for James Bond flims or the fast and furious moives. ZZ put on a great car show and if you get the chance check it out and the wonderful cars.