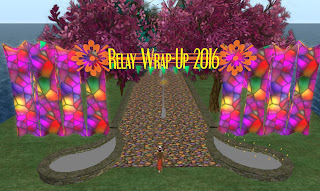 "All good things must come to an end." That old saying was most likely on the minds of many of the Relayers as they gathered in the Relay dAlliez sim on Sunday August 14 for the final event for the 2016 Relay for Life season. Since March, the various teams and individuals had been raising funds for the American Cancer Society, the high point being the Relay Weekend in mid-July. And now, it was time to bring the season to a close with one last event. 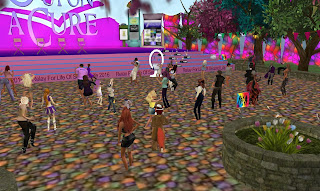 The location of the event was located down a walkway leading from the entry point of the sim, decorated on both sides with trees filled with pinkish-red leaves. Getting to the area where the event was held, most of the people were on a brick patio with a few on seats at the back end. In the front was a stage done in shades of pink and purple, with the "Once Upon a Cure" logo in the back. On the stage were four stools for members of the Committee, but only three people: Nuala Maracas, Leala Spire, and Random  Padar. In front of the fourth was a cardboard cutout of Stingray Raymaker, whom was talking over the radio stream. 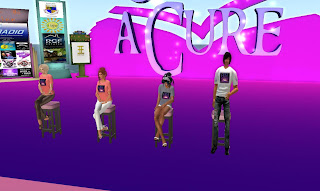 There were a number of announcements made at the Wrap-Up, of which the transcript and a video went up on the Newser on Monday. The total amount raised this season was announced: 59,584,580 Linden dollars, or $238,338 USD. The theme for next year was also announced: "Passport to Hope." Confidence was expressed that the teams would have no trouble coming up with events and builds to reflect the theme next year.

Several teams had moved up  a level in fundraising since the Relay Weekend. 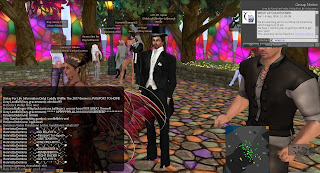 Gold: CyberNuts RFL, Walking Tall For A Cure, Friends For A Cure, Madd Vibes, Too Tough To Die, E&S Breedables, The Quest for a Cure

The winners of several awards were also announced. 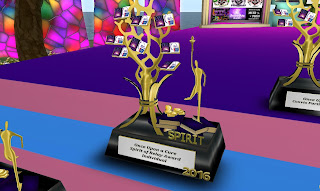 The Spirit of Relay Award, Team, went to the Cure Chasers

"This team goes out there, year after year, and not only work steadily to raise funds at their own events, but help energize and inspire this entire Relay.  The team remains above the fray and is always assisting other teams and individuals.  They reach outside their team and outside of Relay to hold fundraising events and raise awareness of the American Cancer Society. This team took a new team under their wing this year, made them feel welcomed and supported and always had a team member at one of that team's events.  This team also stepped up and helped host an event for a team when that team was unable to be in world due to travel and family commitments. They cheered all teams in the volunteer group as each team met a goal.  Their constant cheering trackside for people walking the track helped keep everyone awake on Relay weekend.  For 9 years this team has been one of the most consistent in fundraising, participation, support and outreach. Attend an event anywhere and you will find Seinna, Alexia and other team members in attendance. They exemplified the the one team spirit. They are truly one of the foundations of this Relay."

Friends For a Cure received an Honorable Mention.

"A new team who wrapped themselves up in our Relay and carried an amazing bright torch as their part in the crusade. Friendly, so kind and loving within the group and outside of it. They represented our Relay with a spirit that showed the EXAMPLE of what the Relay spirit is. Amazing team! They attended every class, every Town Hall and if you went to any team event you could find them there!  They have ties to the live music part of SL and were able to spread the word further than ever in that genre and we thank them for that.. deeply. I'm so glad they've joined our group and am proud to call them Relay Family."

The Spirit of Relay Award, Individual, went to Dianna Wycliffe

"This year's winner is well known in Relay for her generosity of spirit and her abundance of relay passion.  With tireless effort, she helps literally every single person who asks for or needs help with anything, from finding their way to events, to setting up convio, or just helping run team events.  When teams needed event ideas, she was there  to offer some, when a relayer was feeling down, she was there to lift their spirits.  She led her team to success in both convio and linden fundraising donations. Whether getting eggs ready for Easter, scaring the bejeebies out of everyone in an early Halloween event, or introducing relayers to a special  Pet Relay event, she never stopped.  She volunteered as a Fundraising Advisor this year to help new teams learn the ropes.  And with all this going on, she still found time to be a familiar face at almost all the other relay teams events with words of encouragement and praise. She has been a fervent supporter of RFL in SL for years, talking on leadership responsibilities and providing a continuing vision for her team, Harmony of Hope."

There were two new awards given out this year. One was "Change Makers." 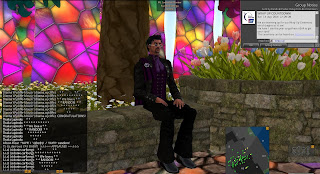 "The Change Makers Award Is a celebration of individuals who have made a difference to Relay weekend. They did something during Relay weekend that grabbed attention. An outstanding act of kindness or a remarkable contribution, memory or laugh to the Event Day. Persons who brought humor, understanding, camaraderie, dedication and a strong sense of Relay Spirit to the event. These individuals will bring new guests to share the Relay weekend experience, they’ll promote unity and spirit throughout."

Those awarded "Change Makers" were Eclair Martinek, Ricka Deerhunter, Fuzzball Ortega, Gem Sunkiller, Secret Rage, Madonna Daehlie. There was also an honorable mention to Sue Peregrine, "Her name has come up many many times for what she took AWAY from Relay weekend…...lag!  The nominations sum it up best…'lag free for the first time in the history of Relay.'”

The other new award was "Community Champion," which went to two individuals and a group. OD Designs was given the award as although they formed Relay teams in the past, "This year that team chose not to make a team but instead play host to a number of team events." The first individual was Zander Greene, "He is influential in the amazing success of The Fantasy Faire.  He has served on the telethon team that covered our Relay for years.  He has used his building skills in making ACS Island what it is." 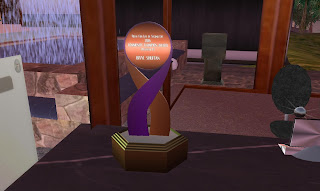 The second individual given the award was a surprise, "Our second award goes to BIXYL SHUFTAN and the SL Newser.  Bixyl is a member of the Sunbeamers team but outside of the team Bixyl has been blogging since 2010  about RFL of SL throughout the years with his SL Newser. Bixyl we appreciate all the time you devote to highlight RFL of SL in your Newser."

The list of winners can also be found on the RFL of SL awards page.

Over the past few days, I've gotten no shortage of congratulations for the Community Chamption award, including from real-life friends and family who found out. I've very proud and thankful for the award. But a couple things should be noted. One is that the award wasn't just to me, but also the Second Life Newser: a team of reporters. A number of members, such as Gemma Cleanslate whom has been part of the Relay for years, and Becky Shamen whom has become part of my team the Sunbeamers, have helped out in coverage of the Relay in ways large and small.

And then of course is the first part of the award's title: community. The Sunbeamer's community, the Sunweavers, have been supporters of the Relay of Life in Second Life for years. Members such as Alleara Snoodle, Lomgren Smalls, Dusk Griswold, Shockwave Yarreach, Cynthia Farshore, Skylark Lefavre, the late Artistic Fimicloud, our chieftess Rita Mariner, and others have contributed much season after season. It's a community in Second Life which I feel proud to be a part of.

With another year behind us, the Relayers can look back fondly at the events, and take pride in helping fund more and better cancer treatments, and bring the day when finally there's a cure for all cancers a little closer.