“Free to Be Who You Are, with the Power of ASN” 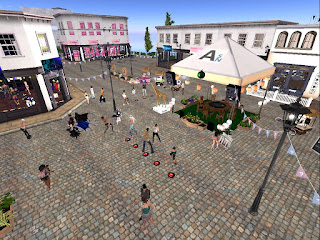 On Friday, the 29th of July, in Lionheart, the shopkeepers of Cerri's (Cerridwen Melody) Miss Mischief Mall broke out in celebration with their clients, hosting freebie carts strewn around an ASN pop-up tent around a Greedy game, dancing on pads lining the courtyard; sploders went crazy, raffles filled the night, and even the Lindo players came and got balloons!  But there was something else that united these avatars, from all walks of life... This community is known as Avatar Social Network.

Avatar Social Network is like a Facebook, however, it is for avatars for all kinds of games and grids.  You don't have to give your real name or location, it caters to privacy.  You are the hero in the stories you make with your avatar, so why not share them with others who think like you do, on ASN?  I must admit that ASN is my favorite past time, as I learn so much on there!  I enjoy keeping up with everyone's adventures in their pictures or blogs, and staying up to date with the newest releases.

ASN is also different from Facebook, because you can have fun earning credits and badges too.  For example, there's the ASN Photographer badge, given to members who have uploaded a lot of photos.  Or there's a VIP Badge which costs $25 per year, but you have unlimited storage (for pictures, pages, groups, etc.), full privacy control, free classifieds, more freedom and access (please know that ASN is FREE to join, being a VIP member however, is just like icing on the cake).  Badges like these are earned very easily by participating in the website activities.  Credits are also earned this way, and can be exchanged for L$ at any ASN terminal. 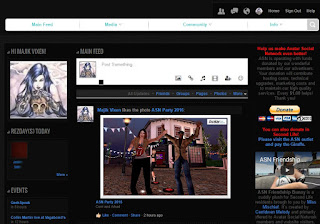 (The photo viewed on my themed ASN of Cerri and Arkad, is courtesy of Cerri (cerridwen.melody))

Just recently ASN completed a "Facelift Project."  Arkad Baxton, the creator of ASN, remarks that the site is now faster, performs better, and has a brand new look.  ASN certainly has come a long way from its original form, back in 2008.  Arkad says, "The idea of having a social network for Second Life residents and online gamers started in 2008 and I ran a test website for that, called Lumenville which was an actual place in Second Life.  Then there was a test website set up in 2012, called Prim Friends, which then changed to Avatar Social Network as you know it today, and was launched to the open public in 2013."

I asked Arkad how he came up with the idea for ASN, and he said, "As you probably know there wasn't any well known or working social networks for second life, Opensim and other online games.  The only successful privately owned social media website, Avatars United was purchased by Linden Lab, just to close it down a month later.  All other still existing popular social networks, like Facebook, are made specifically for real life so people needed and still need a website that they can use and enjoy as their virtual alter ego, being an avatar of their choice from Second Life, an Opensim world or IMVU with multiple accounts if they wish, or a warrior hero from a preferred online game like World of Warcraft." 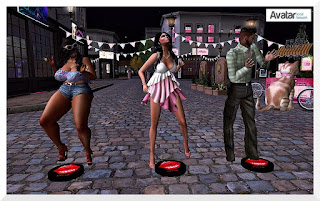 Aside from just being an interactive website, ASN is also about getting together and having fun inworld.  From anything like the GAB Machine (Group Activity Booster) sending out a notice about earning L$, to events people post and advertise... Just like the one that happened at Miss Mischief Mall.  Cerri says, "Arkad and I work closely, so we bounce ideas off each other.  I think we stumbled across the idea, both to help promote ASN and the mall.  I like to help the mall store owners wherever I can, (hence the low rent), so by drawing people here I hope to give them more traffic.   I think there are still a few stores still available, and I believe you can request notifications through the rental system for whenever a store frees up - so you will never miss an empty store.  :)"  As for future events at Miss Mischief Mall with ASN, there's always something in the works, stay tuned for details, or check it out on the website!

MajikVixen
Posted by Bixyl Shuftan at 6:00 AM