The memorial stood up against the sky, with names of people who perished in 9/11. 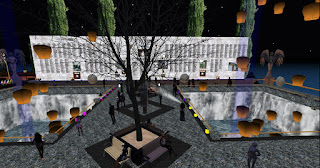 As Geena Zackerly-Magic (geena.zackerly) described, at one end of the memorial is an eternal flame signifying the light of these souls and keeping their memory forever alive. The two recessed waterfalls, as Genna explained it, represent the footprint of each building.  Genna said that the beam of light in each footprint signifies each tower and are intended to light up the heavens for the loved ones as a guiding beacon to eternity.

People were encouraged to change the sky to match the Midnight sky when the ceremony begins.  I did that.

During the ceremony, the "Lanterns of Souls" came out of the water from both footprints, showing the rise to heaven for souls of every human who had perished that day. "Feel free to light a candle," said Geena. Some of the candles were already lit before the ceremony. 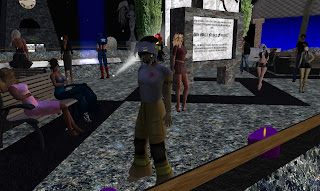 The ceremony began at 2pm SLT with the military.There was a live television broadcast that we all watched that day and a very comprehensive description of the events of the day. Lanterns started to come out of the footprint.  Music filled the air as we listened to the memorial.

What have happened on that day was a terrible, tragic event.  It is there for us to remember for a very, very long time as we stood at the memorial. With what they have, some people donated to the cause.

The only words were being spoken by people close to the memorial like with Geena.  For most of us, we just stood and remember what happened that day 15 years ago.

It was not something to be forgotten ever.

While music and lanterns fill the air, I remember staring at the screen in horror as the towers collapse to the ground.

My heart had not hardened but I wept for these people lost that day.

SocialRose thanked all the men and women who took up the call. 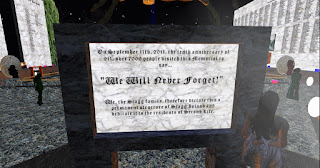 Puma Concolor (pumaconcolorsr) puts it best this way, "To live in the hearts we leave behind is to never die. Remember those on this day 15 years ago whose lives were taken away needlessly. Their names etched on the walls before us and what price they paid to live the dream of freedom.  Never forget what they gave up to live the idea of peace. Let not one of us forget those who risked and gave their lives trying to save who they could. Remember those in the armed services who have and forever will stand vigilant to serve as a deterrent to the evil that befell out great nation that day. Hold close the memories of those who have gone before us and let them live on through us all.”

Geena said that the time had come to accept what has happened.  It is not a nightmare, it is real. 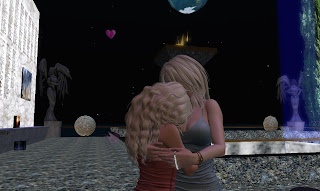 "The music you have heard may mean something different to you., however we offered you music that we felt best portrayed the feelings of the heart and emotions of the day. The bottom line is these beautiful spirits will never be forgotten . That day has been burned into all of our memories! Faz and I would like to thank you all for your donations to the memorial. This memorial has been dedicated as a permanent landmark for all Second Life residents to visit. Your donations help to assure its permanence. Thank you for attending the 2016 9/11 tribute, Be well and peace be with you !! ~~ Fazio and Geena Magic" said Geena.

It was a day that I would not forget for a very, very long time.

As I gathered the information up, we were told that the last ceremony would be at 6pm SLT.

We will be having the ceremony again next year as we always have every year for one purpose - to remember these lost in this awful event.
Deaflegacy
Posted by Bixyl Shuftan at 6:00 AM