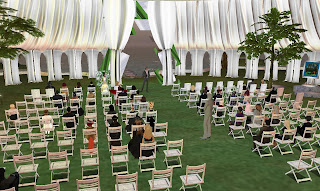 It was Saturday September 3 in which news reached Second Life of the passing of a member of the Relay: Catt "Kala" Gable. She had been a member of the Relay Rockers. Two weeks later on September 17, there was a memorial service to her. As 5PM approached, people began gathering under a large tent at the Relay dAlliez sim. There was plenty of seating available, and more than forty people were present. Some had the title "Relaying for Catt." There was music playing, including, "These Are The Times We Will Remember."

A number of people had a some words to say. Among them was Nuala Maracas, "I first met Catt, she will always be Catt to me, even though she changed her name to Kala, … I first met Catt back in 2006.....almost 10 years ago....40 years ago if you go by Second Life  comparison.   When you have known a person, face to face, for that length of time, you get to know their nuisances,  you can see their face when they speak, but most importantly you can see their eyes... their windows to their soul.    In the virtual world, we rely on our emotional gut feelings.  We hear the inflections in their voices.  We hear the caring, the trust, the honesty, the empathy, and the playfulness within their words.  And these traits are amplified 100 times when words are not spoken often.

"Catt Gable was one of those people.   A caring, honest, empathetic  soul, whose words, when spoken, spoke volumes.  When Catt spoke, she let you see into the windows of her soul through her voice.

"In November 2014,Catt had been through a serious medical emergency. She had had respiratory failure followed by cardiac arrest several times and kidney failure. She was missing from Second Life for a couple months until she was able to get access to a computer and get in touch with us.She remained in the hospital for several more months, but, with her laptop in her hospital bed she walked the Relay Track with her team once again in July 2015.   She got to go home in August.  While she was in the hospital more tests were done and reviewed and only 1 week after returning home, she was called back to her  doctor's office….. she had cancer.

"Now, I had never met  Catt in person, but  I knew she was a proud person, a private person.So when she shared her diagnosis  with me last year, I knew it not only must have been difficult for her to share something so private, but that is also must be  serious.  I recall her saying, a few months back, “ I want to share my story sometime. It might help others.”  To hear that coming from Catt was like someone took a mega phone and stood next to me and yelled in it.  It was serious….. It was Stage 4  uterine cancer with some metastasis. 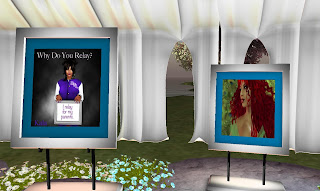 "Never once did Catt stop taking care of others.  She tended to the Memorial Garden on ACS Island, she comforted those who needed comfort, never letting her situation overshadow that of someone else's.   Few even knew of her diagnosis until almost 7 months later when she shared her story at the Relay For Life kick off.  Cat became the curator of the Memorial Gardens at The American Cancer Society and helped many find the special place for a photo of their loved one.  She spent countless hours in the gardens talking to whomever happened by, whether for just a peaceful place to be or to pay respects to a loved one.  There is no better way to express what the gardens meant to Catt….than in her own word from her speech at the Relay For Life Kick Off last March.

"Catt had a fantastic sense of humour and loved finding the good and fun in everyone and everything.  To this day, I still haul out these bagpipes she had me playing at her wedding many years ago.  I sounded awful...just as if she had given me them in the non virtual world.  But I played those pipes every chance I had over the next couple years and laughed hard each time.

"We has a lot of good laughs when we organized It’s Raining Men Date Auction for the Relay Rockers.  I think she had more fun auditioning the men than actually running the event. And The Chip N Dale Dancers, she had a wicked sense of humour when helping to organize that event.

"Her sense of style was to be envied.  She was not a model in Second Life but she could have outlasted and outplayed any top model in here …..why?  Because she had grace.

"I learned something about Catt, after she had passed, that shocked me.  She LOVED heavy metal music...she was a metal head!  Never in my wildest imagination would I have put Catt Gable and Heavy Metal Music in the same sentence.   But apparently she did do just that as she was wrote music reviews for a magazine in Los Angeles in the 80’s.     I wonder if she had the leather jackets and spikes and that wild hair that was the style of the day back then. 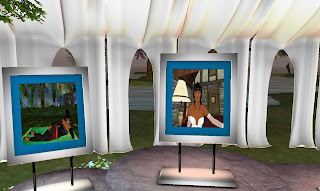 "I will forever miss our chats.  We talked about nothing and everything at the same time.  We had catch up time every so often . She had always found a new area to explore, new people she met, or just reminisce about some fun time from the past 10 years.

"I am so glad Catt was able to make Relay weekend this year.   She walked the opening Survivor Lap, and she walked the final lap of relay to the closing ceremonies. She logged off for the last time at the end of Relay.   I can’t think of a more fitting way for Catt Gable to leave this wonderful Virtual World ...doing what she loved… Relaying."

Christina Georgina Rossetti offered a poem: "Miss Me, But Let Me Go......"

When I come to the end of the road
And the sun has set for me,
I want no rites in a gloom filled room
Why cry for a soul set free!
Miss me a little, but not for long,
And not with your head bowed low.
Remember the love we once shared,
Miss me, but let me go!
For this a journey we all must take,
And each must go alone;
It’s all a part of the master’s plan
A step on the road to home.
When you are lonely and sick of heart
Go to the friends we know,
And bury your sorrows in doing good deeds,

Chipnonk Zhong offered another after a few words, "Hi I'd like to share a memory of Catt. she was such a wonderful person and when I first came into SL, she is the one that found me and we got talking about Relay for Life. She is the one who got me on the Rockers team and helped out Diamond and Denimas do events. And she was such a great friend to me. I will miss her dearly and here is a little something for all of you that was written to bring us comfort on such a great friend."

I took a stroll down Memory Lane,
A journey that should have been fun.
What I found was hurt and pain,
Over things that couldn't be undone.

Thoughts - Slide back to the beginning,
Each memory - A vacation in yesterday.
No way to change the ending,
The happiness has gone away.

The Moon has lost its silvery glow,
The Sky has lost its comforting hue.
No magic left in the Rainbow,
To make the wishes come true.

The death of a heart happens so slow,
Shedding off the hopes and dreams.
Like a million flakes of winters snow,
and evaporating like a cloud of steam.

Doubts and fears invade my mind,
The obvious no longer apparent.
Happiness and Joy so hard to find,
When you lose a child,spouse or parent.

Another poem was from Peachy Sassoon, "Life." 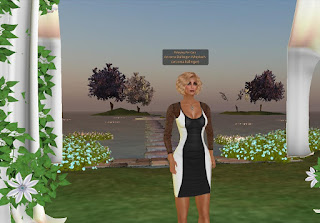 Trader Whiplash had a message from Panza Elide, "When the thought of where I wanted to wed Bain hit me, I knew it had to be on ACS Island.  We had been to the memorial garden many times, visiting and remembering lost friends.  I wanted those friends at my wedding also.  Catt was our resource to contact, and she was so instrumental in contacting Sting and making sure our having a marriage ceremony there would be okay.

"That is my most precious memory of Catt.....her part in making my dream come true.  A beautiful, gracious soul who was always there to help others.When the thought of where I wanted to wed Bain hit me, I knew it had to be on ACS Island.  We had been to the memorial garden many times, visiting and remembering lost friends.  I wanted those friends at my wedding also.  Catt was our resource to contact, and she was so instrumental in contacting Sting and making sure our having a marriage ceremony there would be okay.

"That is my most precious memory of Catt.....her part in making my dream come true.  A beautiful, gracious soul who was always  there to help others." 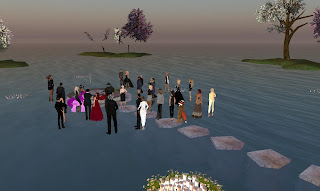 With the statements and poems over, people began to talk freely, "I look up and smile, knowing that Catt is watching us." "She was a beautiful soul."  "Here is love for Catt from all of us." "May she rest in peace with Alliez." "She's probably already Relaying with Dr Klatt and crew." "There's not a doubt in my mind on that." "Fitting that the Lighthouse we all landed in so many times is outside the tent.""Alliez was her first friend in SL. I am sure she was there to greet her and show her how to use her wings." "Can hear Catt say I know how to wear those wings." "Catt earned her wings along time ago." "We are all that much better for having known Catt."

A number of people expressed their condolences to Catt's friend, Woodstock Burleigh, "Woody, we're here for you and share your loss, brother." "She smiling at ya Woody" "We love you Woody."

"Thanks for this memorial." "Thank you, Trader and Rockers, for sharing Catt with us." "Thank you for having this for us.  Catt will never be gone from us as long we hold her in our hearts." 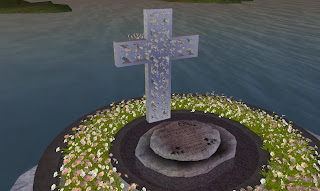 People were then invited to, "Please feel free to wander out back and see the memorial. You won't fall in the water." Many of the people walked down a series of stone steps, which concluded with a cross standing over a circle of flowers, with a stone in the middle, with her name, time in Second Life, and a quote from the Bible, "My heart and flesh may fail, but God is the strength of my heart, and my portion forever: Psalm 73:26." The stone's last words were "Relayer, Guardian, Friend."

"We will leave it here for awhile until we have the permanent home and will let everyone know," we were told about the memorial. Someone dropped a pink pony, "Rosa Pony! I still have mine somewhere in inventory." "The pink pony that you so laughed at Morgan and us." "I will ride my Pony Rosa once around the track at the next Relay for Catt." When it was brought up there were pony avatars that could be made pink, some responded they just might get one and do a lap around the Relay track next year in Catt's honor.

Eventually, people began going their separate ways. But they would keep on remembering their friend.