Tantari Kim And The Last Call For Lupus Prime 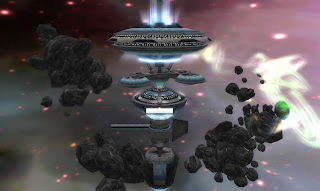 Monday September 5 was the last event at the Lupus Prime Space Station, a multi-story structure high above the Blues Beach sim that was apparently used as a roleplay area with one deck doubling for use in music events. Tantari Kim announced a "Going Away Party" for the station in her group.

The space station is being dismantled!  But before it comes crashing to Earth, let's give it a send-off to remember. Theme is Robots and Sci Fi outfits.  I'll be playing suitably robotic music. C'mon down!  Explore the station!  Rock out! 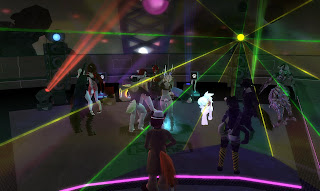 Tantari was happy to see yours truly at the location, "Heya Bixyl. Welcome to Lupus Prime! Tonight, I've taken it over!  Muhahahaaaa!" She told the others, "Bixyl is my favorite news fox. He does the SL Newser, SL's finest news source." One of the dancers there spoke of the place, "This is the best space stations I have ever seen." There were well over a dozen others dancing along with Tantari many dressed up in sci-fi looks, such as futuristic outfits, cybernetic parts, or both. At one point, a cyborg collapsed, the batteries for it's mechanical legs having run out of power. Fortunately, someone was willing to press the button for reserve power. 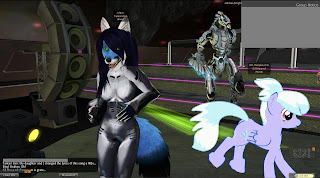 Tantari would announce the music titles, and spell out some of the lyrics of the songs. At one point, she did something a little different, "And a TMBG track.. here's hoping you don't Become a Robot! ... My daughter and I changed the lyrics of this song a little... Foxes are great!  Foxes are good!  Foxes are taking over in your neighborhood! Three cheers for our vulpine buddies, handsome, intelligent and strong!  You might as well prepare for assimilation by singing along!" One of her fans went along, cheering "Yaaay for vixen scouts!" referring to a group Tantari founded. 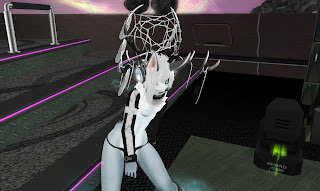 Other songs included anime tunes, music from Deus Ex: Human Revolution, Portal, and other computer and video games, Deadmau5, and other tunes. One Deadmau5 song was The Veldt, "Ray Bradbury wrote a story called 'The Veldt.' It's about a super robotic nanny that cares for the children.  But the parents think it's wrong, so they try to take the children away. The children flee into the machine. The parents go in after them and see a veldt, a grassland.  The machine made it for them. Lions set upon the parents and tear them to pieces, so the children can be happy forever and ever in the machine. If you listen closely, the lyrics follow the story. 'The world that the children made.... outside the lions roam, feeding on remains.  We'll never leave, so in love that we are.  In love with the world we made.' I thought this song was so lovely and peaceful until I researched it!" 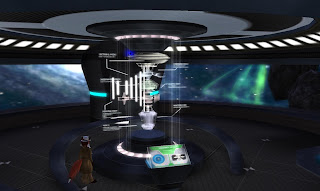 One other song was named after supposed top-secret group of a conspiracy theory, "From Serial Experiments Lain, this very high tech song is MJ-XX, a play off of MJ-12 or the Majestic 12 classified project. In UFO conspiracy theories, Majestic 12 (or MJ-12) is the code name of an alleged secret committee of scientists, military leaders, and government officials, formed in 1947 by an executive order by U.S. President Harry S. Truman to facilitate recovery and investigation of alien spacecraft." One guy in a dark suit and glasses nearby whispered into his shirt collar "She knows..." 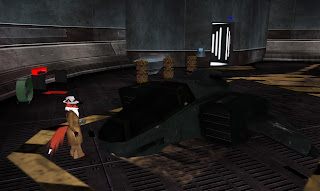 Tantari ended her set with the opening theme to the anime "Ghost in the Shell: Stand Alone Complex," "I am calling, calling, spirits rise and falling... To become myself once more." It wasn't lost among the lapine fans in the crowd one of the songs in the anime was "Rabbit Junk." After the song, she commented, "Looking over this station, I'm thinking of another brave space station that served proudly, and then was destroyed.... 'Humans and aliens wrapped in two million, five hundred thousand tons of spinning metal .. all alone in the night. It can be a dangerous place, but it's our last, best hope for peace. -- This is the story of the last of the Babylon stations. The year is 2258. The name of the place is Babylon 5.' 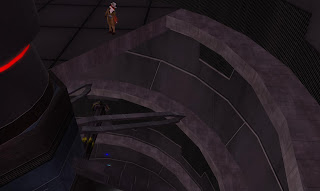 "If you're a Babylon 5 fan, I have a treat for you.  This song was written for an unreleased Sierra fight combat game that was never released.. but I got it! By Christopher Franke, the original composer of the series. This song is EPIC. Lupus Prime, we salute you!"

One of the crowd commented, "Watching everyone dance as I imagine the station crashing down onto Earth...." One red vixen stood and saluted as the song played. 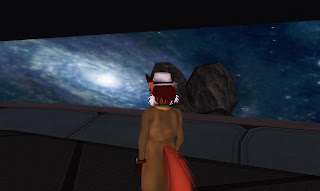 Tantari was soon finished, "Thank you all for listening." The red vixen who saluted, presumably one of the crew, spoke, "For being here, Dankeschöön! " The stream was then set on automatic. People were invited to continue dancing, or look around the place. Many did, taking the elevator to various floors. There was a command deck, a docking airlock, a personel airlock, a shuttle bay, a reactor floor, and a deck with rooms that were presumably once crew quarters.

And so, baring a last minute save by someone willing to buy the place, Lupus Prime is set to fade away into the virtual nether. But it would not be forgotten.