The Presidential Debate From the Clinton HQ at Bay City 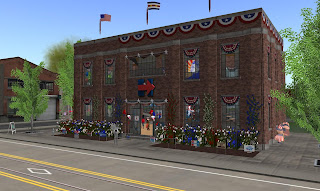 On Monday September 26 at just after 6PM SL time, the first Presidential debate took place between Democratic nominee Hillary Clinton and Republican nominee Donald Trump. Besides television, one could also see the debate online, including in Second Life where it was streamed in places. Among them, the Clinton HQ in Bay City.

The location has been in Bay City since July, a two-story tall brick building decorated with flowers and red, white, and blue. Inside were posters championing their nominee and ridiculing Trump, as well as the previous Republican President, Bush. In the middle back was a stage with two podiums, each with a cardboard cutout of one of the candidates. There were about a dozen chairs in front of the stage, and a couple stools. Some sat in them. Others stood. Attendance varied a little as some left early and a few arrived late, but it's safe to assume a few dozen attended. A few were in clothes with political themes, "I'm With Her," "America Was Already Great." The crowd was mostly female, which probably explained someone saying when I stepped in, "Oh good, another male!" 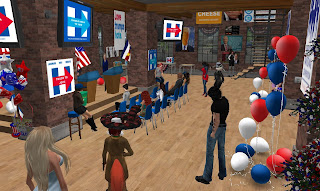 Not all came to simply watch. A few griefers showed up, including one, strangely enough, in a chicken avatar with a Trump flag, "I guess we now know why the chicken crossed the road." Another yelled, "Vote trump you furry luving coomie scum!" Someone joked that the griefer was no fan of "Fox news." Another mused, "A coomie is a large present." One would later comment, "(I) was a little disappointed with the griefers. I expected something clever."

The screen behind the podium when clicked on would show a live feed of the debate, at least for those whose viewers were enabled with the right streaming software. During the course of the debate, it was no surprise as this was a pro-Democratic party location that the crowd was clearly rooting for Clinton, "His hair is just so awful." "He looks all squinty-eyed and constipated." "Is it just me or does he sniff up snot every other sentence?" (a reference to "sniffing" noises Trump seemed to make on occasion) "Nothing he does is presidential." "Trump is so annoying." "Oh-em-gee, he is soooo delusional!" 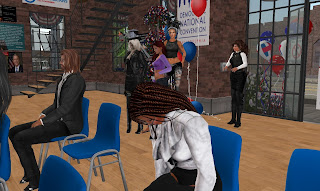 There were a few comments that weren't so pro-Clinton, "I don't think she looks so well either." "The moderator is biased, and I don't like her playing the race card." And there was a joke aimed at the moderator, "Lester Holt's glasses are, in fact, x-ray specs. he can see them naked." The more noted SL personalities there were more reserved or neutral in their comments. One person slumped forward in her chair, away from keyboard. Someone joked she'd fallen asleep from the debate.

When the debate ended, everyone who expressed an opinion was confident that Clinton had one. A couple people expressed their appreciation for me being there, "Thank you Bixyl for being here as (a) reporter." Some were looking forward to round two, "Hope to see ya again at 2nd debate." One person stated they had already voted via an absentee ballot, due to a vacation planned for election time.

I did do a "Search" for Trump locations, but only one had people around, and only a couple at that. As I've heard some people continue to express political opinions critical of the Democratic candidate since Linden Lab banned the leader and several others of the controversial Trump Organization group a few months ago, it may be that the serious Trump supporters (as opposed to griefers pretending to be them) are keeping a low profile.

As heated as the political banter was tonight, with the charges of Trump being "dangerous," it's notable that four years ago the vitriol was pretty high as well, despite that since then Democrats have calmed down over the Republican nominee Romney. So once this battle is over, will the Democrats forget what they spoke about Trump? Time will tell.