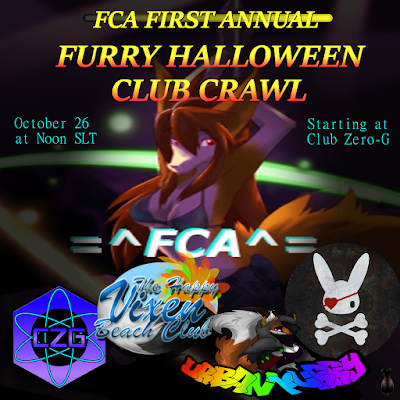 On Friday October 26, four clubs took part in one event that lasted over ten hours: the FCA First Annual Furry Halloween Club Crawl. To begin with, for a while not much went on with the Furry Club Alliance as an organization. Club Zero Gravity and Happy Vixen were both under White Vixen Enterprises and talked with each other on how to avoid schedule conflicts while Club Cutlass always had it's events on the same days and times. Then Urban Furry joined, the first club outside the Sunweaver/Angels community for quite some time. The four clubs talked about an event for cross promotion. Then came the idea of a club crawl. For those who don't know, a bar crawl is when a group of people go to a number of bars in a day or evening, spending a small amount of time in each. Since Linden Lab was having some luck with it's "Creepy Crawl" events every Halloween, why not one of our own? It was decided that it would be on the last Friday before Halloween.

TODAY'S THE DAY!
Come one, come all to the FCA's first Annual
Furry Halloween Club Crawl 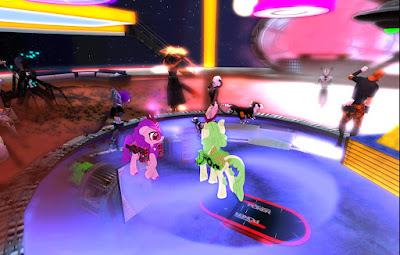 Friday October 26 came, and at 12 Noon SL time, people headed over to space station Club Zero Gravity. The "party among the stars" would be the first stop at Sunweaver Space (129, 249, 3597), with DJ JB spinning the tunes. 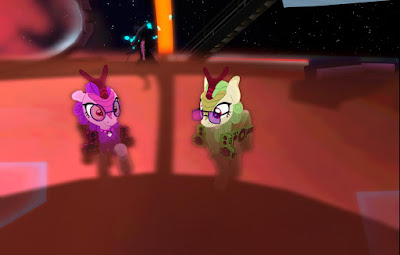 We hope you attend the special event of the year, The best ever, And you will see many you never met. We have JB, And his Halloween show! We call today's the Creepy Crawl Event that has been started longer then we been here. Many will come He will have some great Halloween Music! May even have a contest.

And Many will Crawl all over the space station, So come and be creepy to, Even Creepy Cute! Dont miss out! 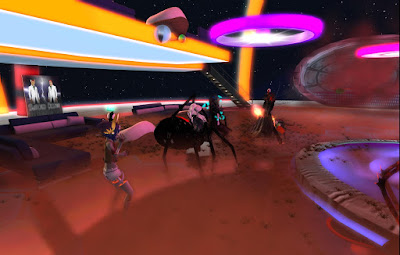 The "creepy crawl" took on new meaning when took girls took on drider avatars (were-spider), and one unleashed her "minions" in the form of dozens of regular sized spiders. Some reacted by backing away. Others talked about "pest control on eight legs" or how the space station's garden could use them. 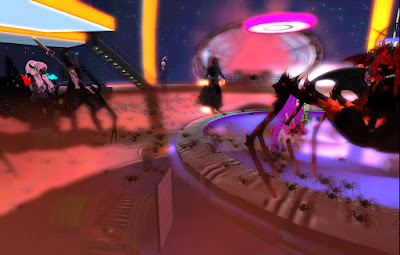 We are Halfway Through and in a Half hour The Creepy Crawlers shall come and crawl all over us, Surround us hehe. But I am creepy so I shall be just fine, I have wings^^ Anyway JB Has much more Blues and Halloween Mix of all kinds to come. Contest... " Alll  Things Spooky" just dress up for such if you wish. 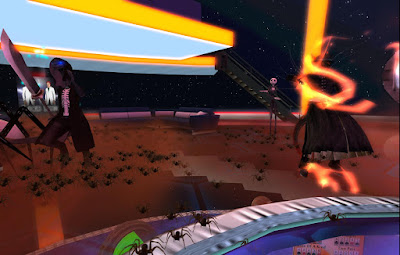 The 1600 Linden dollar prize for the event was split between Hawke213x Resident and Biohazard707 Resident. 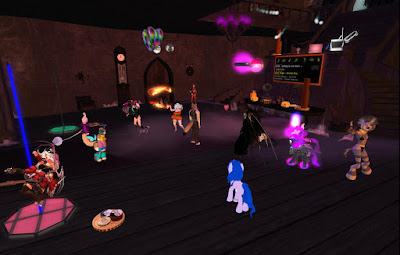 At 2PM, the crowd headed to the Happy Vixen's Haunted Manor at Purrfection Estates (126/175/2004), which was a special build for the month described more (here). DJ Applebloom, aks DJ Hakrua, played the music. 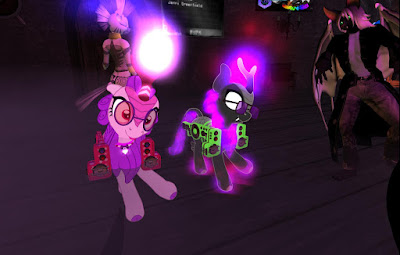 The WVE Club Crawl continues with DJ Hakrua as she plays her set only at The Haunted Mansion. Who knows maybe she will throw in some fun Halloween tunes at us. Come party with us 2 - 4  pm SLT. Celebrate Halloween with us today  with the theme Creepy Vs Cute. The spirits are waiting. 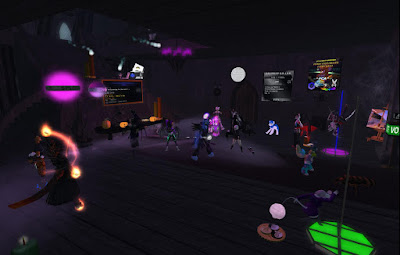 The 2000L prize was split between Dusk Griswold and Rain0dash1. 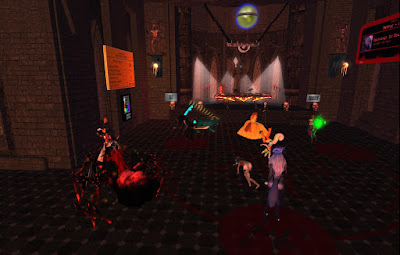 4PM came, and the party moved to Urban Furry's haunted area. The landmark given to Mystic Timberland (164/239/2701) didn't lead directly to the club, but the start of a haunted trail with a few scares. Once inside, we got music from DJ Soundshifter. 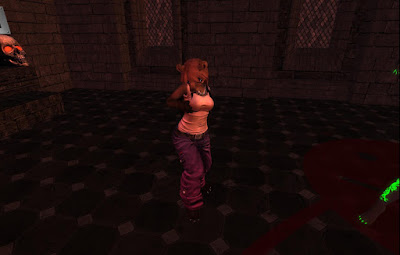 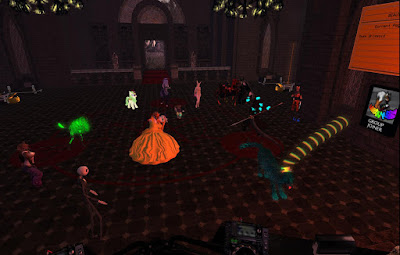 It was quite a "monster mash." 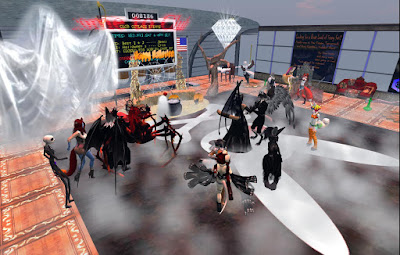 At 6PM, the party moved to the Club Cutlass airship at Sunweaver Bay (114/117/757). And the place had been decked out with decorations and mist.

Leg 4 of the Club crawl! $1000 L's to start!
It's the first of 2 Halloween events at Cutlass. Tonights event is part of the Halloween Club Crawl. Get on your Halloween costumes and come party with our scary DJ Crim. The haunting begins at 6 PM. 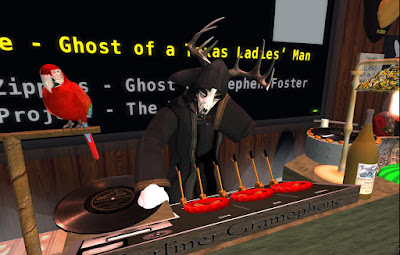 DJ Crim, who often DJs for Cutlass on Fridays, played the music for the two hours. 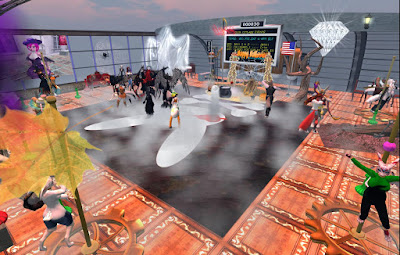 So for two hours, the party went on, the crowd cracking Halloween jokes and puns. 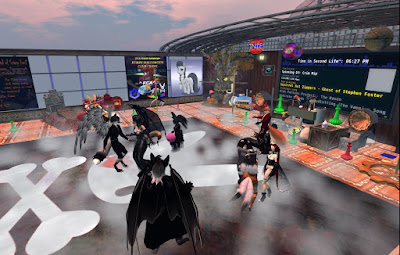 Club Manager Jenni Greenfield won the contest for the ladies. The winner for the guys was a certain fox who went "bats" for the holiday. 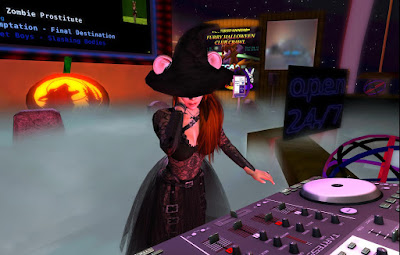 And at 8PM, the party moved on to it's final stop, back to Club Zero Gravity. DJ Lexi spun her musical spells for those on the dance floor and lounge area. 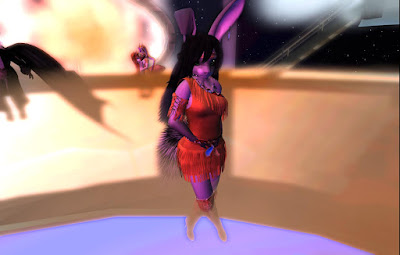 Welcome one and all to the last stop for our First Annual Halloween Club Crawl where ghost ghouls and goblins run amok, Souls of all ages embarking through the journey of sounds now find the, Final, Destination, on tonight's tantalizing tour of terror. 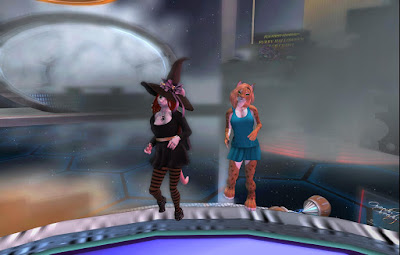 The lovely sounds of our DJ Sexi Lexi, the Sexy Nezumi dj as she shares her love of lore and lyrics matched with sounds and sin.   Celebrate Halloween of past, present and future.  Nightmare Scare for the theme.   Come, enjoy with us if you dare. and the finally amount for the Crawl is $5000 L's 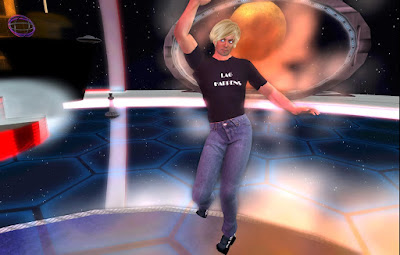 And what avatar would be really scary in a party of mostly furry avatars? 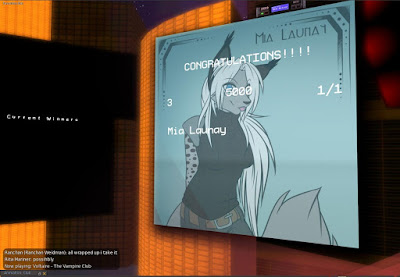 Mia Launay won the prize for this part of the event: 5000 Linden dollars. 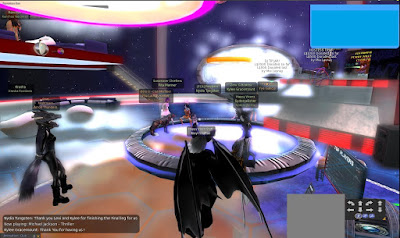 Club Zero Gravity manager Ranchan told everyone, "Thank you all for coming out,  thank you to our DJ's  Thank you to Our Hosts, and most Important, thank you to , you, our friends, family and new faces as well as old that came out tonight during this First Annual Halloween Club crawl."

And so, the FCA Creepy Club Crawl was over. But it wasn't the end of Halloween events. Goblin Bay would have it's Halloween party the following night, plus at least three of the four clubs will have parties on Halloween. And of course there's Ziola Linden's Creepy Crawl at 10 AM.