"All good things must come to an end." And so it was the case with the Relay for Life's fundraising season for 2019. Things were somewhat different this year as the season had been shifted a month early, from February to June instead of from March to July, to avoid an anticipated drop in activity in Second Life, and donations. For this season, "All Aboard For A Cure," besides some successful teams from last year and before, there were some new teams that did very well, such as the motorcross teams in the "Five Days of Relay." 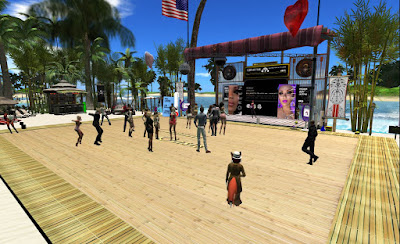 Although the Relay Weekend was on June 8 and 9, and the track was taken down soon after, the season hadn't ended quite yet. Some teams planned one or two more events for a little extra push to raise a little more funding. On Wednesday June 19, the Spirit of the Dragon RFL team decided to throw one more party for "Just One More Hurrah! ...Please Join us as this remarkable team celebrates a last Hurrah before Wrap Up !! ... Tonite  we sing and dance and thank all for a wonderful Relay Season." 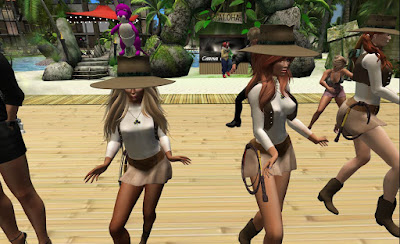 The party went from 4 to 7PM SL time, with musicians Loreen Aldrin, Melenda Baptiste, and
Frogg Marlowe. There were also Adorsy, Kitty Creations and EED Home and Garden 1000L gift certificates available. At the end of the event, team founder Darkstone Aeon announced the team had hit Jade level fundraising, which had been far beyond his original expectations at the season's start.

Spirit of the DragonRFL was going to be a team of 1 - I was going to put a few vendors out at my store and that was it - whatever was raised  would be good enough -  because of a few special folks who pushed and prodded    and made me think why I wanted to relay - we have now hit L$: 511,051  so for Kammie Eva Ted Jad - BB and a few others who took me kicking and hollering  down the Relay Road I thank you ! 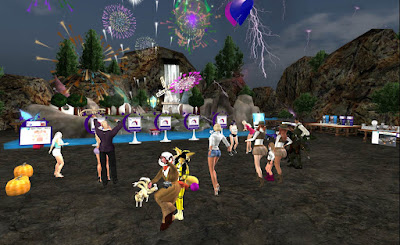 Two days later on Friday February 21, three of the smaller teams would have a joint event, hosted by team Mini A Chu and involving Ryukyu Warriors and Harshlands, from 11 AM to 8 PM SL time. 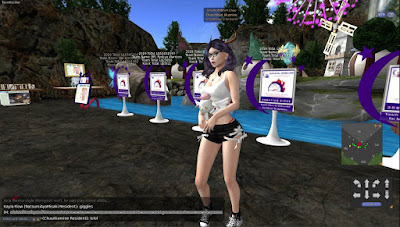 There's a Mini Dragon Roo Wrap-Up party in Harshlands For a Cure with Friends Lurking in Shadow starting at 11am slt Friday all the way till 8pm SLT with DJs from multiple teams and this will be our last attempt to bring 3 teams to Silver: Mini A Chuu, Ryukyu Warriors and Harshlands, bring your friendsssss, plus this is an exhibition of things, for this duration only, if you donate a certain amount to either Ryukyu Warriors, Mini A Chuu, Harshlands, you will get to choose a diorama of your choice, an absolute unique and ultimately detailed Mini A Chuu's specialized product 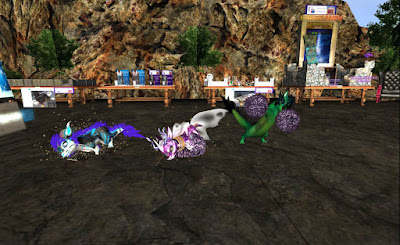 It was a fun party, with some of the new noodle dragon avatars dancing away with the humans and furs. Teams Mini A Chuu and Harshlands would reach Silver level. 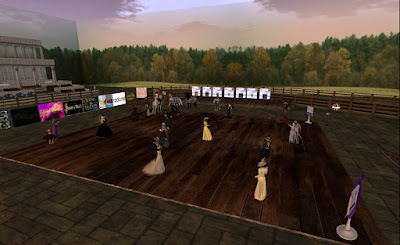 Saturday June 22 would be the last event of one of the larger teams, Team ACTS Royal Ascot. Following the horse race was a dance. 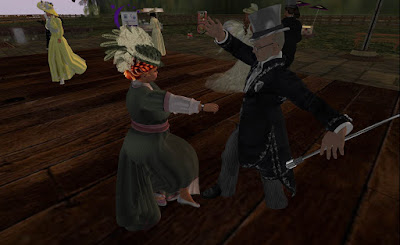 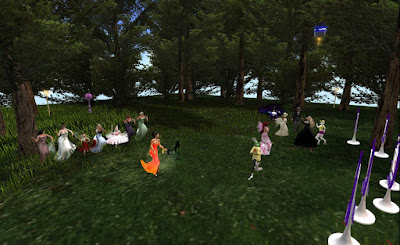 That afternoon and evening was perhaps the last event before the closing one. Team Shadow held a "Summer Solstice" party at it's Shadowed Forest Glen.

You are invited to join Team Shadow as we celebrate the Summer Solstice, Saturday from 5:00 to 7:00 pm SLT at the Shadowed Forest Glen. Formal or fae/fantasy fear requested, however, not required. Bring your kiosk and help us celebrate the close of the 2019 RFL of SL season.

The Sunbeamers and Roos With a Dream were among the teams taking part. Team Shadow would hit Silver. 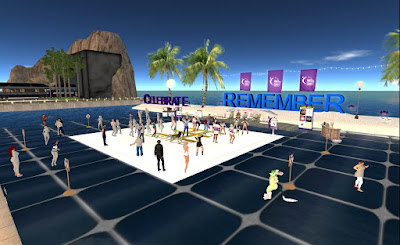 Finally on Sunday June 23 was the Relay Wrap-Up event.

Join us ... as we say goodbye to the 2019 Relay Season!  Come and celebrate the amazing year we had!  Final Fund Raising Awards, as well as Community Champions, Spirit of Relay, and the Gordy Klatt Awards will be given.  It is time to PARTY and CELEBRATE!  See you there! 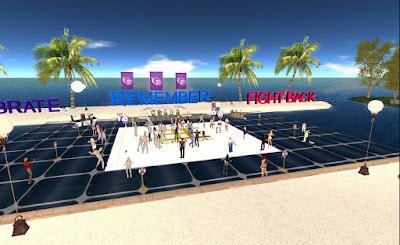 While the official start was at 10AM, there was some music and dancing beforehand. 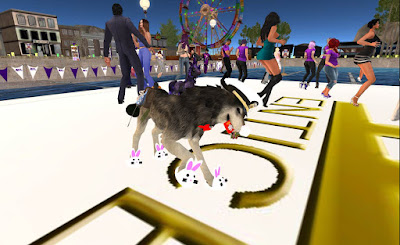 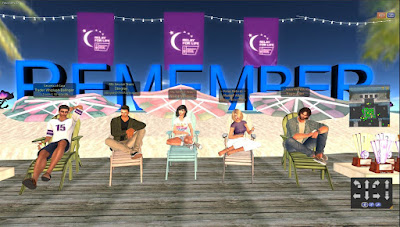 Some final awards for the season would be given out. Among the people honored were Jamie Broken for her technical work and Ishtarangel for her photography. 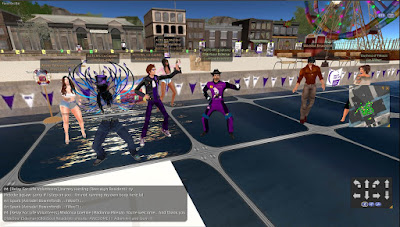 There would be some more dancing afterwards. 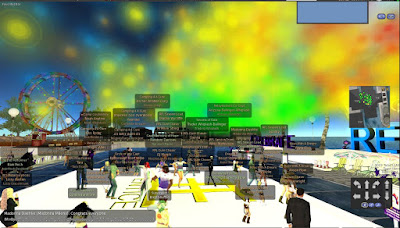 It was a party that would last for a while, the last event of the season.

There would also be a poll given out for a choice of two themes for next year: cartoons or games.

Shortly after the Wrap-Up, Stingray would send the following message:

We were honored to welcome and celebrate the lives of hundreds of cancer survivors. Our luminaria ceremony demonstrated the community's warmth and strength in honoring survivors and those who are no longer with us.

I would also like to thank the Relay For Life event volunteer leadership teams, team captains, and participants who worked so hard to make this year's event a success. And of course, thank you to our premier sponsors, RGF Estates, The Chilli Post, Relay Refresh, Rockliffe University, and Sol Existence. By coming together once again, you all made this season a spectacular success!

Together, we can beat our biggest rival, and we're already getting started on planning for 2020. To ensure you receive  timely information, follow us on Facebook, join the Relay For Life Volunteers Group, and/or visit RelayForLife.org/SecondLife.

With all of my appreciation and gratitude, 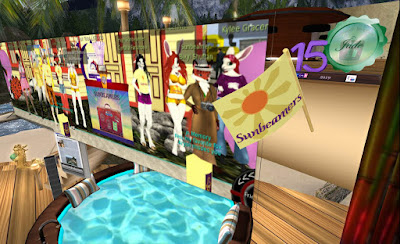 For my own team, the Sunbeamers, it's the end of another successful year. Three of our most active members had to deal with real-life trouble, including one having to go to the hospital to have cancer treated after thankfully discovered early so it was more easily dealt with. Despite the problems, the team continued to do well, and ended up with achieving Jade level for the second time in it's history and the second time it won a campsite trophy. For the Sunweaver/Angel community, "the little team that could" continues to be a source of pride, and over a decade after her passing continuing the work of the late Artistic Fimicloud.

So we say goodbye to the 2019 Relay for Life in Second Life season "All Aboard for a Cure," and look forward to the next one.