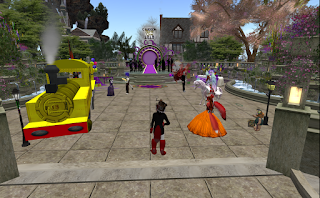 Wednesday February 26 was the fourteenth anniversary of the founding of Caledon, Second Life's largest steampunk community. It should be noted though that the partying began a few days earlier on February 22 with their Mardi Gras celebrations. There was a "Skull and Bones Revelry" at 1PM. And at 5PM was a parade consisting of a train, numerous floats, bicycles and other vehicles, and people just walking. The parade ended in Port Caledon, where there was a dance party, with generous amounts of beads thrown.

Then came Wednesday, and the main events.

It's Caledon's Fourteenth Anniversary, and we're having a Ball!  Come celebrate the founding of Caledon.

Our wonderful nation, Caledon, was founded 14 years ago.  Come help us celebrate on Wed. Feb. 26th, in the Dragon Ballroom at the Rain Estate, Caledon On Sea, from 7:00pm to 9:30pm SLT  This is a good time to dress up, perhaps in the Caledon Tartan, or just our nation's colors.  Expect other events such as the Catgirl Ball and the Rose Hunt which also happen around this time, and let me know if you are planning a special event for this week

The Catgirl Birthday Bash will immediately follow the anniversary ball and run to midnight. 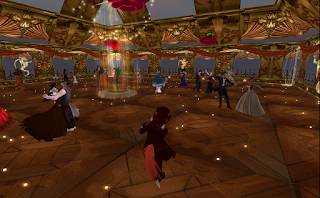 The Dragon Ballroom was high above the Caledon by the Sea sim. And the party started at 7PM SL time. The human, demihuman, furry, and tiny avatars present wore Victorian outfits, save for the feral deer which just pranced with a Caledonian flag in it's mouth. Among those attending were Steelhead's Fuzzball Ortega and of course Caledon's Governor Desmond Shang, affectionately known as "The Guv." Someone (not the Governor) had a gesture, "Governor Desmond Shang has entered ... all hail." Desmond apologized for being slightly late, "I've been stuck in this, surreal, 'reality' recently. (laughs)"

In the party chatter, at one point someone asked how Caledon got it's name. Another person answered, "we had a contest our first years and a submission by Junie GInsburg called 'Mighty Caledon' was selected as the winner." Of it's anthem, "If I recall, there was ONE vote separating the two anthems. So we said the winner was the national anthem and we called the runner up the Civic anthem." There were also people remembering it's growth, "at least once a month, somebody popped up wanting to join their regions to Caledon." "I remember IBM wanting to connect and we collectively said Hell No.  A lot of Caledon at the time did not like the corporate interest in Second Life around that time." "I remember a dangerous meteor shower that hit Caledon.  A huge one fell right behind my shop in the park in Kittiwick." 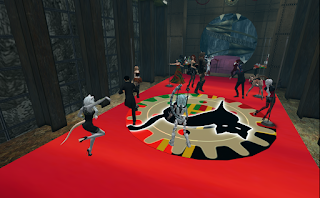 Eventually the formal ball ended, and the people moved on over to the Catgirl Dungeon in the catacombs beneath Caledon. For those outside the community, officially it doesn't exist, "There is no Cat Girl Dungeon, this is clearly a mass delusion." Unofficially, a number of women showed up as catgirls, furry and neko, one cyborged catgirl, and one mousegirl. "Cats like being sneaky," one commented. There were dancepoles for the catgirls, as well as a scratching post, and danceball rezzers and refreshments for everyone. 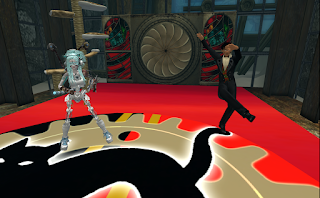 There were comments about real-life homes having their own, secret areas, "I too know more the a couple people with in-house dungeons." "I wasn't shocked at the idea of them doing whatever, in a dungeon," Desmond remarked, "What shocked me, was getting FIT doing that."

Other topics discussed included Sansar, which the Lab recently announced it was looking for someone to buy or help them run, "I think LL doomed Sansar when they said 1) No transfer of inventory or L$ and 2) No adult content. Between those, they were screwed from the beginning." There was Pooky Amsterdam's "I'm Too Busy To Date Your Avatar" song, which was among those played. There was some talk about Dungeons and Dragons and other roleplaying games. There was talk about creepy guys who didn't have a clue how to treat women. There was discussion of Japan's low rate of men and women getting together. There was talk about Chinese factories and those who worked there. And more. 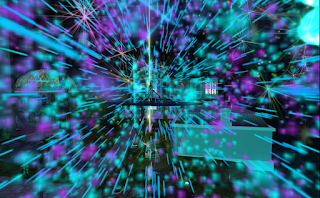 Just before Midnight, as the catgirl party was about to wind down, fireworks began going off in the air above the city. It was a great end to the fourteenth anniversary of the large steampunk community.