On Sunday night October 24th, Burn2 was winding down as this was it’s last day of events. But the crowds were still present, attending music events, and of course seeing the exhibits. And as 8 PM SL time approached, people began gathering in the two northern sims, Burning Man-Bordello1 and Burning Man-Rabbit Hole. It was almost time for one of the closing events, the burning of the Lotus Temple which was located on the border of the two areas.

As people gathered, those trying to get into Bordello1 were unable to, and found themselves waiting at the edge. Eventually, the resident limit was raised, and more were allowed in. Even though almost all the avatars were human shaped, there was still a great variety among them, some dressed like your regular man on the street, others were in white and/or had white turbans, others painted blue, and more. A number of them were playing bongo drums.

Finally the hour arrived, and the blue structure went up in flames. Then something happened. The eastern half of the temple seemed to vanish. But the crowd continued to watch enthralled as the remaining half burned. After some moments, the missing half reappeared. Then the temple began to disintegrate, the pieces breaking off and falling down. But instead of evenly falling down, the half which had briefly vanished lasted longer as the half which remained began to crumble. 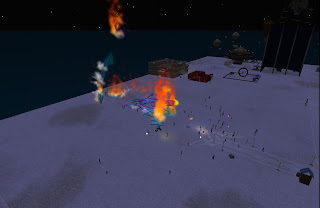 The event seemed slightly surreal, with the lamplighters and others either painted blue or dressed in exotic garb playing the bongo drums to the burning and the fire, it seemed almost like some ancient tribal ritual. Others were twirling around sticks of fire. Everywhere, there was the excitement of the event. 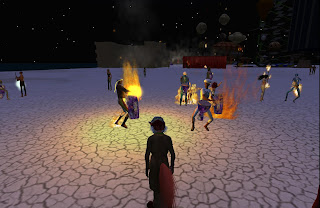 Among the celebratory atmosphere, a couple people expressed a bit of sadness that Linden Labs had withdrawn their support of the event. But they were a small minority in this festive crowd as the remains of the temple burned and vanished. The parting words of one Burner, “... it’s light shines on us all. Time to go Aloha. Keep the burn in your soul. Farewell Burners. Keep the fire within.”

And so, this mega-event of Second Life officially came to a close, at least it did hours later with the last burn at 4AM SL time. Although there are no more events, the structures will remain up for the rest of the week. This includes the Lotus Temple, which was resurrected for those who missed the celebration.