For twelve hours at Southern Colorado’s Enchanted forest on Saturday October 23rd, people danced away while DJs and live musicians did their music. All for the cause of helping a cancer survivor, SpUnKy Young. 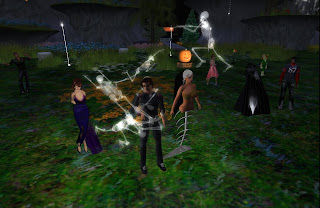 The earlier press release had this to say about SpUnKy: “She's one of those rare people who is willing to go the extra mile for others, with little regard to whether such effort is good for herself. She is a Cancer Survivor who works hard to make each day count. Her medical condition has long kept her housebound. Second Life is the lifeline that has allowed her a measure of Freedom and Normalcy.”

Unfortunately for SpUnKy, her laptop had failed beyond repair, and with her other expenses she had no money for another. And so three Relay for Life teams got together, the Relay Wizards, the Relay Rockers, and the Passionate Redheads, along with T-1 Radio and the Kingdom of Avalon to organize a fundraiser event. A number of DJs and live musicians, as well as one comedian, volunteered to be part of the event. Bernice Kappler donated a box of Halloween gestures, all sales going to the charity. Marilynn Whitfield donated some profile picture services. 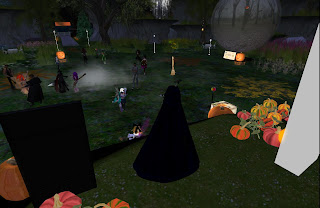 And at 10 AM SL time on the 23rd, the event began with DJ Monette Gaea spinning her tunes to the audience, while Daaneth Kivioq greeted arrivals, “Welcome Everyone to Trick or Treat for SpUnKy! The Intan stands have couples dances, and there is a solo dance ball above the stage to the right. The Jack-O-Lanterns scattered around are the donation kiosks, and there are boxes of Halloween Gestures for sale. All proceeds go to help SpUnKy Young, A cancer survivor, who has given so much of herself. So it's time to give back - and give SpUnKy a Treat! THANK YOU FOR YOUR GENEROSITY!!”

The audience themselves were part of the entertainment, many sporting Halloween looks from ghosts, to bats, to spiders, to a boned merzombie, and many more. All in the clearing of a dark spooky woods with the kiosk pumpkins scattered around. There were a few seats for those who didn’t want to dance, as well as a falling leaf globe. 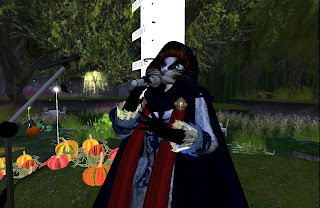 As time went on, other performers appeared. At 1 PM SL time, Allesandra Eberlain sang for everyone with her soft velvet voice. At 2 PM was Phemie Alcott, whom brought a few of her fans with her, who contributed to the growing pot. At 1:19, it was over 80,000 L. By 9:30, they had broke 200,000 L. More performers arrived, at 8PM SL time a break in the music came with the arrival of Comedian/Comedienne Lauren Weyland, the female avatar with a male voice noted for his/her comedy routine, which occasionally got a tad off-color. Ay 9 PM, the music resumed with the last performer, FunkyFreddy Republic and his guitar.

As the event came to a close, so did last-minute donations. Daaneth Kivioq announced, “... we raised over $1,350 US Dollars total - over 350,000L!!” This well surpassed their goal of 250,000 L. One of FunkyFreddy’s friends commented, “(We) must have conjured up some good angels for this one, Fred.” A friend of SpUnKy spoke in her behalf, “I'd like to thank all the artists who performed, Woody, Sabine, Daaneth, Trader1 and T1 Radio, for your help and participation! and thank all of you for your donations!”