This Friday if all goes as scheduled, NASA’s Space Shuttle Atlantis will launch from the Kenedy Space Center. To those interested in space, any shuttle launch is newsworthy. But this one is different. Friday July 8, 2011 at 8:26 SL time will be the last flight of the last Space Shuttle.

One will be able to see the shuttle launch, officially called STS-135 in Second Life. The International Space Museum in the Sci-Lands has broadcasted shuttle launches in the past, as has the Star Trek Museum. The NASA eEducation sim is another place. One group of people plan to do more than just show the shuttle’s final takeoff. They plan to recreate it in Second Life.

Readers may remember when after Osama Bin-Laden’s compound in Abbottabad was stormed, the building was recreated in Second Life. The team of people behind it, the Avitarian development team, have been up to a new build. The Avitarian Central and Last Shuttle sims have been made to look like Cape Kennedy. Next to the roadway to the launch pad, an event area was set up, which included seating stands, poll questions, a DJ stand, a raffle wheel, and a large digital countdown clock. 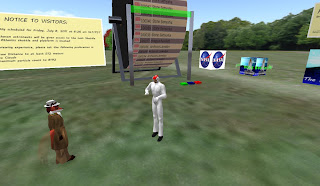 Dropping by the place, I ran into Chenin Anabuki, whom founded the Avatrian team, “We are basically mirroring the very last space shuttle launch of Atlantis STS-135. And, we are inviting the public to celebrate the event with us in world,” he told me, “We are big on space technology.”

Gesturing to the wheel, “We are doing a bit of a fund raiser as a tie in as well. We're basically raffling the four astronaut crew positions for the Atlantis STS-135 launch on Friday. Today, we will be selecting the ones for the Commander and Pilot positions. The wheel here in front of me is the roulette. It has all the tickets purchased to date with names of the avatars.” The wheel had a number of names on it. Some, such as Pooky Amsterdam, were on there just once. Others, like Stone Semyorka, appeared a number of times, reflecting multiple ticket purchases, “This Friday, an hour before the launch, we will draw the winners for the two Mission Specialist positions. So, there will be 4 crew members total for the launch. All proceeds will go to the Youth Science Center.” 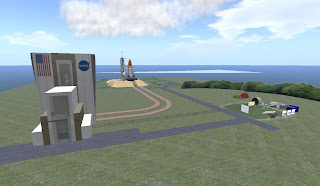 Of this being the last mission, they had heard a number of opinions, “Some are happy that the shuttle era is ending. There are groups who favor the privatization of space exploration. But of course, there are also many who are sad that it is going away and there is nothing to follow it in the near future.” Pointing to the digital clock, “This timer countdown is in sync already with NASA's current launch day/time, by the way.” He then gestured to the shuttle in the distance in the appropriately named “Last Shuttle” sim, “We separated the sim for the rocket launch with the sim where the public viewers will be so we can avoid any lag issues as much as possible. The rocket was custom scripted to mimic as much of the real-life shuttle's movement as we could, just so the experience is much closer to how it is in actuality. It even does the roll.”

Their work on the Abbottabad Bin-Laden compound came up, of which they were thankful for the attention of Grid media coverage, such as Second Life Newser. They described their work on the place as quite fast, “That was very rapid-fire development. In contrast, this one took weeks. (It was) mainly because we also have to build the website and the graphic images, and programming the database for the raffle.”

It was about time for them to chose the designated Commander of the Shuttle mission. The wheel was spun, set for a random roll between sixty and 180 seconds. After a while, it settled on a name: Phelpsa Resident. Phelpsa was a new resident whose groups suggested he or she was a college student. In contrast to those buying over a dozen tickets, Phelpsa had only gotten one, “very lucky, only one ticket but still got drawn.” 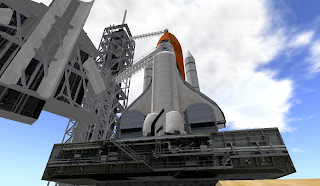 Chenin told me they planned to book a DJ for the launch, “ so there is a bit of entertainment right before the actual launch. She'll start her playlist at around 7AM SLT. ... Some songs will be space related. We have special instructions for her.” He described the course of the mission, “The shuttle will reache an altitude of 3000+ SL meters. Once there, the passengers will be treated to a simulation of reaching Low Earth orbit. Then the shuttle will disappear and they will find themselves on a platform where there is a TP back to the visitors area. We originally wanted a landing event, but it wouild prove too complicated. Doable, but given the amount of time we have for prepping, we opted for just the ascent.”

And Avarrian’s next project? Chenin answered, “We’re going to make an announcement after the launch. It will contain details on what will happen to the build after the flight of the 4 chosen crew members. We're being Kennedy-ish about it. (grin)”

As of Wednesday July 6, weather conditions were looking iffy for Friday, the forcast giving only a 30% chance of conditions acceptable for a Friday launch, which improved to 60% on Sunday.