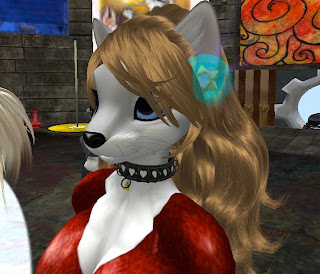 On Friday May 11th, the Passionate Redheads held their first "Bid Me Human" event for the year. To those unfamiliar, the event is based on the "Bid Me Bald" events held in real life and later adopted in Second Life in which a volunteer (victim) gets their head shaved, or online has to do without hair, in sympathy for chemotherapy paitents. But when a team volunteer is covered in fur, well, something different is needed. In this case bidding a furry resident to "go human" for a while.

The first in a series of very fun events, the Redhead's own Gidget (Skylark LeFavre) will have her chance to be bid Human - or stay furry! If at least 5,000 lindens end up in the Human kiosk, the then human she becomes!  BUT! If there is even 1 more linden in the Furry kiosk, the furry she remains.  DJ Indio will be providing the rocking tunes! Come on down to Club Cutlass and help raise some money for RFL of SL! 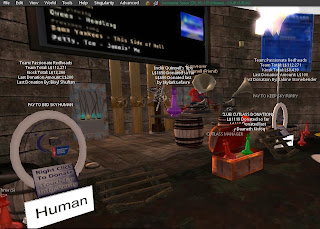 Skylark Lefarve was the volunteer for the event. Many "Bid Me Bald" events are a simple "donate X amount of funds, and John Doe goes bald for Y amount of a week plus another week for every Z additional raised." And that was the case with some the Redheads held earlier. But then a change was made, partially to allow a way out for those not wanting the volunteer to lose her fur coat, and partially to increase the amount by creating the feel of a race. There would be two kiosks set up, one to donate to for those voting to make the volunteer go human for a time, a minimum of 5,000 Lindens needed, the other for her to remain furry. The highest of the two totals would win.

For two hours, those at the event danced and listened to the music provided by DJ Indio, including the Sunweaver Estate leader Rita Mariner. Some visitors dropped by as well. It wasn't long before the minimum 5,000 was raised, and the "Furry" kiosk maintained the lead throughout the event. Finally at the end, the totals were compared:19,600 for human, and 10,939 for Furry. A total of 30,539 Lindens raised. And so, Skylark changed over to a blonde human avatar.

Chatting with Skylark later on, she was still getting used to her new look. She had used the skin itself before, but as part of a neko avatar, and the shape itself was new. She expressed a little worry if most furs would continue to see her as attractive, though was determined to continue on. 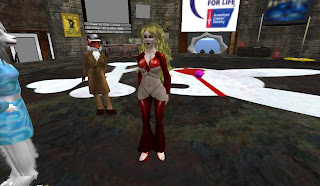 The Redheads are not the only team doing this kind of event. That night the Relay Rockers team started a two week "Bid Me Bald" event with Trader1 Whiplash as the volunteer/victim, with him going bald for one day for every 5,000 raised, "His haircut appointment  is May 27 at 4PM."

Sky's human look is until the next major Redhead event, which is yet to be scheduled. There's talk of a date auction, which may or may not include other teams.

* writing up event notices for the  Team and the Volunteers

* posting those notices to the team blog, and wiring up event reports and other information of interest for the same

* creating write-ups for the event boards

"Edith will be sorely missed."