Saturday April 28th was the Cross-Sim Snail Race for April 2012. Organized by RacerX Gullwing, the race was held to raise funds for the Relay for Life, as well as hold a racing competition not on a racetrack, but across a stretch of mainland. 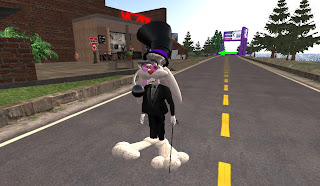 RacerX Gullwing, the organizer of the Giant Snail Races, in his custom rabbit avatar. 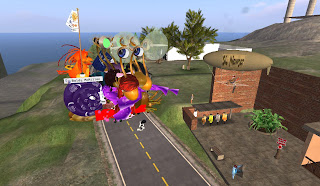 The Racers at the starting line, with the  SL Newser blimp hovering nearby, "The press has arrived." Someone joked to Racer of the giant snail avatars, "They're all just starring at you like they want to eat you!" 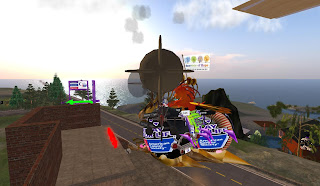 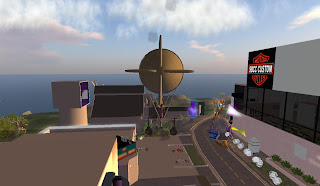 It was a little hard keeping up with the racers in the blimp. 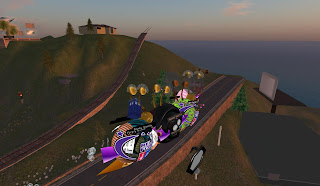 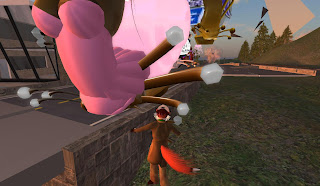 Eventually, the blimp was returned to my inventory, and I kept up with the snails just by flying. 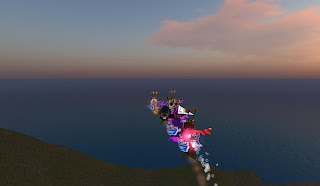 The lag could sometimes cause some strange visual effects. 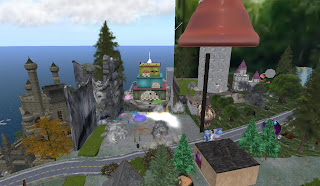 Some of the scenery was quite artistic. 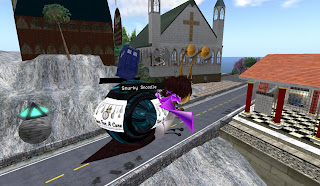 I ended up crashing, and coming back online heard from Relayer Bain Finch that the snails were caught in lag near the newcomer hangout "The Shelter." Here, Snurky Snoodle passes a church near it. 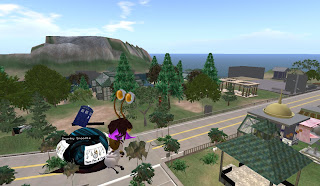 And continues to make progress. 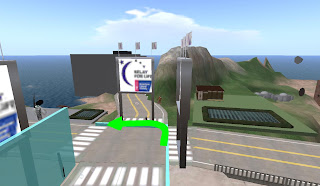 Course changes were marked by signs and arrows like these. Unfortunetly, they didn't always rezz in time for some racers. 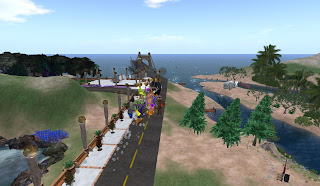 But for most they did, and they continued to make progress at different rates, though some ended up in groups. 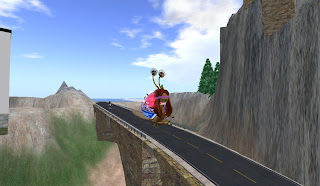 And some had no one else nearby. 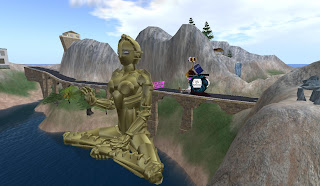 Finally the Finish Line, next to a giant fembot. 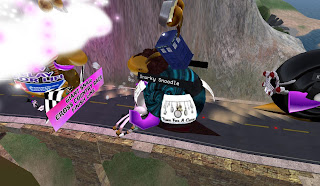 And one by one they crossed. 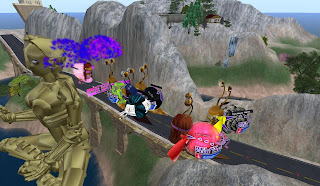 The winner of the race was Gareth8 Albatros, who crossed the finish line before the treet.tv cameramen or myself could see him. He joked, "Finally I win a race, and there are no cameras to record the event." 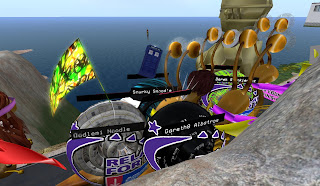 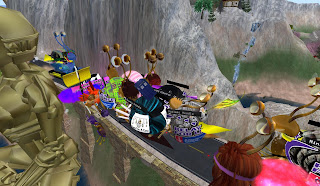 It was noted that the crowds were lighter than normal for a cross-sim race. Some Relayers speculated the Fantasy Faire had drawn many away. Still, everyone involved had a good time. Cinders Vale, "Thanks to everyone who put such a great race on!" Gareth8 Albatros, "Let's do it again somewhen!" Snurky Snoodle, "Thanks Racer! Way to go, we're all winners!" Derek Sienkiewicz, "My first race, and it was great fun, and all for a good cause."

There are three more cross-sim races this season. Keep an eye out for the one later this month.


And finally, the recording of the race, courtesy of RacerX and treet.tv.