Last weekend, on May 12th, Luskwood held an avatar-themed event: a skunk party. The event was held not at the Big Tree (one of the few spots in Second Life which always has some people there), but at "Pub Eltee Head" in the Perry sim, named after founder Eltee Statosky.


Luskwood's Skunk Party - Hosted by Drew Bhalti - at Pub Eltee Head in Perry. Come dressed in black and white; you don't have to be a skunk, but you might want to be! Music and prizes and more, Saturday 8-10PM SLT! 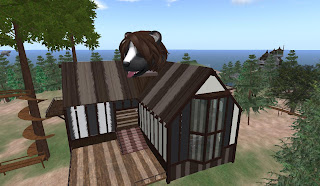 Luskwood wasn't doing an avatar release, or having any special occasion to celebrate. They just invited regulars, friends of, and anyone interested to drop by and dance. You didn't need a skunk avatar, or a furry avatar, though wearing something "monochrome" was encouraged.

Pub Eltee Head, so named as it normally sports a huge replica of the head of Eltee Statosky's avatar head on top of the roof, had been modified for the event. In the place of the Lusk founder's mug was a skunk avie's head instead. And the floors and walls had been decorated with skunk stripes, giving the place a "skunkified" look. The dance floor itself also had a outline of a skunk doing a handstand. The silver danceable shaped like a Lusk head (Eltee's?) remained unchanged. 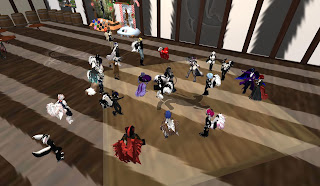 Yours truly was a little late to the party, but getting there it was in full swing with over two dozen people present. Almost all there were in skunk avatars, Eltee being one of the rare exceptions, along with AnneDroid Lily whom stuck with her mouse av but wore a skunk costume over it. But there, the similarity ended. Each one of the stinkers was different in some way. A few wore hardly anything, some were decked out quite a bit. The plurality were Lusk skunks, but there were others from different avatar makers. Some where short while others were tall (I was the second tallest). A couple were hybrids with another type of avatar. And some were colored in red or other shades.

Music from the 1980's was what was played most of the time. At one point, the DJ began playing Michael Jackson's "Black or White." This got some chuckles from the skunks, "What if you're black *and* white? Hee-hee!" Presumably there were other comedic tunes before I got there. And of course there were a few "smell jokes" and wisecracks going around. 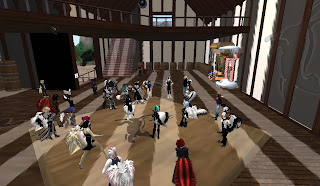 On occasion, people were directed to a webpage, in which people were asked to vote on the winners of the contests, from the best (and worst) dressed, to the best hybrid, and more. I never got a notice on who won.

At 10PM, the DJ announced he was playing the last song. After that, he thanked everyone, and gradually everyone went their separate ways.

Skunk avatars are popular among those preferring furry avatars. Even those preferring another as their main often have one that they wear on occasions. Even some who prefer human avatars will "skunk out" sometimes. Just what *is* it that makes the little stinkers so popular, well, that's anyone's guess. Maybe it's because in a world where critters often blend in, they stand out with their distinct black and whites. Maybe it's the respect real skunks get, even bears standing clear of them. Maybe that it's one of the few wild animals that make fair pets (with a lot of patience involved). Maybe their famous (infamous) defense mechanism gets comparisons to geeks' reputation for infrequent bathing (pet skunks smell like whatever their bedding material does). Maybe those whom have trouble fitting in can relate to the solitary nature of real skunks. Or perhaps some combination of some or all of these.

In any case, it was a chance for skunk fans to get together, whether it be to share stinky jokes, or for the sweet smell of friendship. For those who missed it,  at least one club, Club Zero Gravity, held a skunk event the following week.