On Friday May 19th, the Passionate Redheads held their second "Bid Me" event for the season. This one had a few interesting twists, including the subject: their new leader. 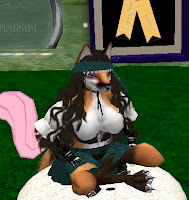 Dusk Griswold, the co-captain of the Passionate Redheads, was offering herself up on the bidding block for Friday May 18th. She wanted something different than the "Bid Me Human" event the previous week. Sunweaver leader Rita Mariner, whom had many of the Redheads living in her estates, joked the theme should be to bid her naked. Such an event would have been shot down by the Relay organizers, but the joke did promote discussion. It was decided that the event would have multiple kiosks, one for those donating to keep Dusk as she was, the others for each option as to what she should be.

Several options were suggested, including human and micro. In the end, the number of kiosks was limited to four. The first was for those wanting to leave her a vixen. The second was to turn her purple. The third was to make her a canine, the joke being Dusk had a dislike of dogs. And the fourth was an unusual choice of avatar: bird. And so, the following announcement was given.


RLF: Bid Dusk (?) event beginning in a few. 4 kiosks set up for you to vote if she stays the same, or changes to something else. 'Paint SL purple' theme, so get on your best purples! 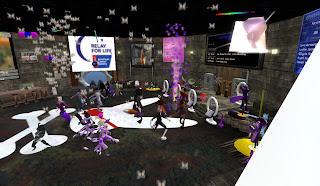 And on Friday May 18th, a number of Redheads gathered at the Sunweaver Estates' Cutlass Club. There was a prize for "Best in Purple" to reflect it being "Paint Second Life Purple" week. But the real event was for the bid on Dusk, or "Ginger" as her display name has recently been, with it's four kiosks. For some reason, the bird kiosk took on an early lead, one that Rita soon cemented with some sizable donations. And soon the bird jokes began to fly, "Looks like Dusk will be a chicken soon." "Her goose is cooked." "I want some breast meat." 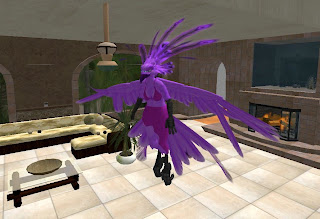 Yours truly wasn't able to see the whole event, having to leave well before it's conclusion. But I did hear of the results. The event raised less than the previous "Bid Me" event, but it did bring in about 5,000 more Lindens. And the winning kiosk? The team had given Dusk the bird, and thus made her the bird. Dusk would be a purple phoenix bird avatar until the next event.

As of now, the total raised by the Passionate Redheads is just under 140,000 Lindens. Other Relay events this weekend included an Elvis Tribute, and a "Poker" game by Sail 4 Life.

Also on Friday May19th, there was an announcement from Daaneth Kivioq. "Effective immediately" he was giving up his leadership position, endorsing Dusk Griswold as Captain "for the rest of the season.  I will remain as active as I am able, and I will attend as many events as I can.  I am still passionate about my support for this wonderful team."

Dusk says she will hold onto her position until Sabine McGettin, whom took a temporary leave,  is ready to lead the team again.