This article is reprinted from Second Life Newspaper. It can no longer be accessed from there as after the paper was shut down, most of the sections, including the one where it was archived, was closed to public access.

Election coverage in Second Life was different four years ago than from today. The Grid was still in the public eye, and months earlier politicians Newt Gingrich and Mark Warner had made inworld appearances. Real life news media would occasionally stop by areas in Second Life with political activity, notably Cafe Wellstone for the left, the Straight Talk Cafe for the right, and Capitol Hill which was officially neutral. Also, with no incumbent, the election was considered more wide open, and more people were interested in this race between a grizzled old war hero and a promising up and coming Senator.

After nearly two years, the 2008 American Presidential Election finally came to a close with millions of citizens turning out to the polls. And in Second Life, many got together to watch the returns come in. 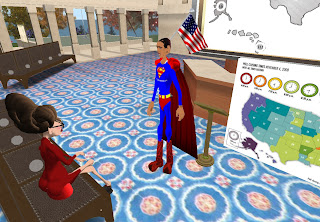 Going around, I found a few amusing sights, such as someone running around Capitol Hill in his skivvies. When offered a campaign button in jest to put there, he declined, “I’m weird, not vulgar.” Then left shortly afterward. A lady there told me there was interest in the election overseas, “I spoke to a guy from Portugal this morning and asked him if there was a sense of excitement there about the U.S. election today. And, he said that there is a lot of interest in his country, and most people see Obama as the winner.”


Checking out the Obama HQ in Silicon Island, a few had arrived before polls closed. They were looking forward to victory, both the Dems and some European visitors, with a few having sour words for the opposition. Asking them what an Obama Presidency will bring, they told me, “eventually, an Obama Presidency will bring a stable middle class, which will create a stable economy, and more employed home owners,” “PEACE,” “ a year and our economy will be creating clean energy jobs.” I later saw a couple avatars that were caricatures of Pailin and Obama, the Pailin one joking, “Well, don't tell McCain that I'm with Barack. He'll be pissed, ha ha! But I LOVE this man.” Later, the two went to SL Capitol Hill, the Barack caricature wearing a Superman suit.

Cafe Wellstone, another pro-Democratic area, had a small crowd early in the night, mostly confident of victory, “And TOGETHER we will begin the next great chapter in the AMERICAN STORY.” Though some were anxious. Later on when I tried going there, the sim was maxed out and closed to me. 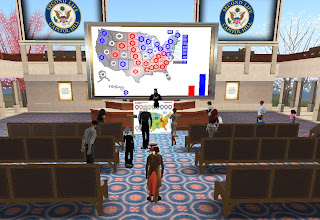 Heading to the Republican’s Straight Talk Cafe, there were not just the regulars, but some liberals had also dropped in to debate them, some barbs traded between the two sides. A few branded him communist. More Conservatives were saying they could not vote for a charismatic leader they knew little about. Some also expressed worries about more trouble with Islamic terrorism. Asking them what they could expect of a McCain Presidency, one answered, “I expect McCain and Pailin to grow jobs, restore out image around the world, and secure victory in the wars we are fighting.”

As time went on, states were declared as polls closed and tallies were taken. Finally around 8 PM SL time in the Capitol Hill sim, “This is it.” “... here it goes!!” “Oh my God! Noooo!” “This will decide it.” “Nooo.” After a few more comments of the sort, Kiwini Oe went, “Well, now we’re a bit over the top! 304/143.” “Congratulations,” Kei Mona announced, “We have a new President.  We welcome President-Elect Obama and VP-Elect Biden.” “Oh my God! As soon as he won, my MSN crashed!” 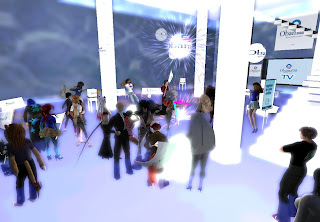 Princess Ivory had this to say, “Do you all realize that this is a historic election not just for the US, but for SL? 4 years ago SL wasn't as popular. In the past, we would gather with our neighbors and family in the living room and watch the election results on television. Now we sit and watch our avatars sit together, and listen to the BBC broadcast from another window. Incredible. Who could have forseen it?! ... I think that this is one of those elections, regardless of its outcome, that will go down in the history books as being a significant moment of change in the way we communicate, share data, etc. And the immediacy of the online environment tends to mobilize people. They don't feel so alone. They are part of something larger.”

Checking the Obama HQ, they had set up some bright glow-balls, bathing the interior of the building in light. And with victory declared, many were dancing away. Some were clearly rubbing it in, “Eight years of opression is over!” “... he and his followers are finished!” Others were more conciliatory, “McCain sowed respect to Obama and showed humbleness.” After McCain’s concession speech, one remarked, “McCain has asked all Americans to support Obama.” One lady in voice and chat told everyone, “I'm an American Ex-Patriot in France and for the first time in a LONG time, I am proud to be an American that the USA was able to overcome racism and elect the first black president.” She put her son up to the microphone, whom began singing. 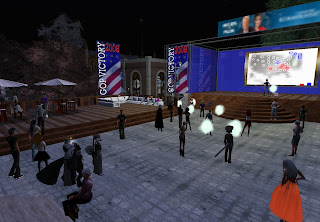 Then a couple came in, telling everyone they had just been banned from the Straight Talk Cafe, saying they ran through the place naked, “StreaKIN THE rEPS!!” Heading over, the main group of avatars had gone from the Cafe to the deck outside another building, where the Conservatives found no peace in their candidate conceding defeat, Obama supporters coming in to harass them. One was commenting how wonderful Obama’s election was as it would help usher in a world government, but it was unclear if he really meant that or was trying to aggravate the conservatives by invoking a conspiracy theory.

“You voted to suffer.” One Republican lady told them, “I voted for the man who tried to free my country, Vietnam.” “Any comments on what the Republican will do now?” I asked them. “Regroup.” “We need to clean house and get back to our conservative roots.” “1) Clean house in the RNC. 2) Take a few Leadership Institute courses 3) start promoting limited government candidates who believe what they say 4) pain(t) ever action by Obama as the socialist pickpocketing that it is. 5) Win the 2010 and 2012 elections.” One soldier sighed, “I will go to base tomorrow, keep working, kiss my wife goodbye for a year in March, and hope I am not shot when Obama makes me run from Iraq.” Some wondered if they could have done better with another candidate. Others felt there were not many realistic alternatives to whom they had chosen. 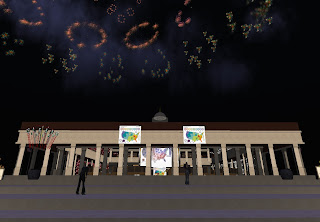 Outside the political sims, people told me about two clubs, Star Tails and Cutlass, having election-themed parties. Cutlass called theirs an “Election Reconciliation” party, with a poledancer in red, white, and blue. Stopping by Luskwood to chat, one asked me if the Straight Talk Cafe was griefed with Obama particles.

Stopping by Capitol Hill one final time, there were fireworks in the air to mark the end of this long campaign.

Four years later, Capitol Hill and the Straight Talk Cafe, later renamed the GOP Cafe, are gone. Cafe Wellstone is still around. Fewer people seem interested in the election, as one real life columnist put it, the days of "Hope and Change" are long gone.