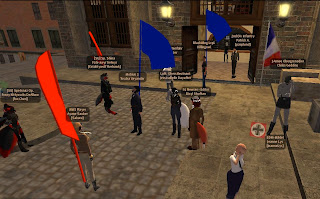 Saturday September the 8th was the first day of New Bastogne's Second Annual Tank Rally. Inspired by the "World of Tanks" computer game, the event was sometimes called "WoT2." The event was sponsored by New Bastogne's 1. Armee, in addition to Patrick Paspund, JessicaBelle Dayafter, and Sunshine Juneberry. Fox Cheri acted as an umpire for the event.

The Tank Rally differed from normal ground combat in the New Bastogne area. There would be no infantry involved, only heavy, medium, and light tanks. The combat tags normally worn by soldiers and tankers would not be used, although tank damage was dealt and recorded using the VICE system. Participants from both Allied and German factions were randomly placed into red and blue teams. So each usually had a mix of Allied and German tanks, sometimes a mix of Western Allied, Soviet, and German. Participants wore the flags of their teams, red and blue, on their backs, which poked out through the tops of the tanks. 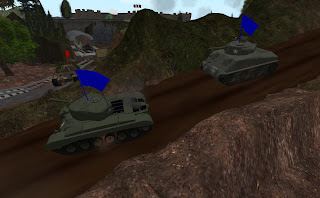 At one point the participants were greeted by an official looking figure in a tricolor sash, "Heil pour le Maréchal Pétain! … I am the new mayor, Etienne Vigée, nice to meet you." He stated that before long, there would be an election with at least one opponent. It was not mentioned whom would be voting.

The tank battles were fought in both countryside and urban terrain, taking a little time for the forces to meet. But once the battles were joined, the action was usually fast and furious. The first round was in hilly country, with Fatalitywolf Firehawk, Vickster Khun, and Ayane Sauber on the red team. Killingowl, JessicaBelle Dayafter, and Toscha Vayandar were on the blue team. Both teams rolled out from their bases. But when they met, red team had their guns pointed right at two of blue, whom were driving across their line of sight. Vickster soon took out two, but JessicaBelle's light tank avoided the red team's fire and soon took out one. But her computer crashed, and so the match was declared a red team victory. 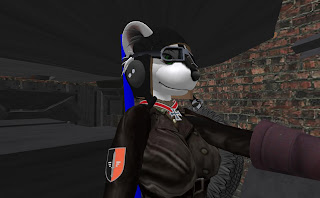 Round two took place in mostly urban terrain. Red team's Toscha Vayandar destroyed all three blue tanks. Round three, which took place in central Bastogne, started with the two bases not far apart, and the teams soon met up. This time Toscha's luck did not carry over, and his red tank was blown apart without a kill along with Blue's Crymson Serenity's. Blue Team's JessicaBelle was the winner with two kills, with Ayame Sauber having one. Red team's KillingOwl and Fatalitywolf got a kill each before their tanks were disabled.

The fourth round was in New Fallout, normally the home base of the Soviet team. The terrain here was hilly, with trees, boulders, and some trenches. Red team had Vickster, Ayane, Toscha. Blue had Fatalitywolf, JessicaBelle, and KillingOwl. Meeting up, Fatalitywolf and KillingOwl fell to Vickster and Toscha after several rounds of cannon fire. JessicaBelle once again was outmaneuvering the Red team, but her tank ended up caught in a ditch and without mobility was quickly smoked. 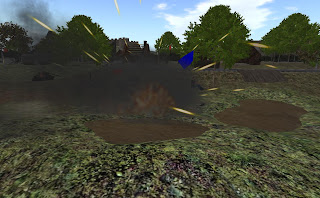 Under the point system, Vickster was the winner of Day One of the Tanl Rally with 1800 points. JessicaBelle was second with 1200 points. Toscha was third with 1100. Ayane Sauber was fourth with 700. They along with others who scored received Linden cash prizes. Vickster as the top tanker also won a new tank of her choice. There was also a raffle, in which the winner was due a second tank, along with a new plane from Dayafter Productions and a new uniform from Sunshine. The prizes just for this first day exceeded 6000 Lindens, two tanks, one uniform and one airplane. The points will be accumulated throughout the Rally until the end.

The Tank Rally goes on in New Bastogne every day to next Sunday, September 16.