I went searching for a “Talk Like a Pirate” party, and I quickly found three fun ones. 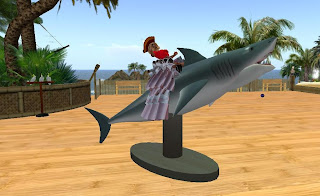 My first stop was at Pirates at Black Shark Reef, a tropical paradise with plenty of palm trees and sandy beaches.  Their party was located at  Black Shark Reef (144, 149, 411).  Couples were dancing to great tunes like Mark Mulligan’s “Drinking Mexico Dry” and Jimmy Buffett’s  “Banana Republic”.


Maximillian Desoto, co-owner of Black Shark Reef, was the DJ.  He and his partner, Sunny Vandyke, looked great in their pirate outfits.   Desoto said, “I've been doing Talk Like a Pirate Day parties for a couple of years.  We like doing it.”


Black Shark Reef boasts SL’s only Mechanical Shark ride, too.  They were giving out a prize for the avi who could stay on the longest.   Wyatt Bouscario tried his luck with the Shark, followed by his partner Peachalicious.  “Gotta catch that man 'o mine,” Peachalicious said as she tried to beat his score. 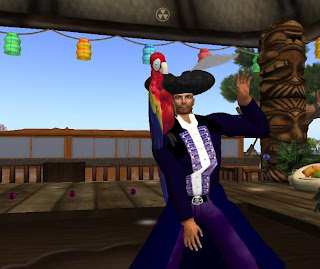 I hated to leave this fun group, but I wanted to catch up with some other pirates.


My next stop was at the Tiki Bar, located at Poseidon's Adventure (101, 140, 23).  In addition to dancing, these multi-tasking pirates were having a trivia contest!  Edward Pluto, assisted by his friendly parrot, was the DJ here.  Pluto had one of the most colorful pirate outfits that I saw tonight.


My last stop was at The Brass Rail, located at Fountainhead (81, 107, 55).  This was the wildest party, no doubt because they had already emptied a few kegs by the time I arrived.   Some of the ladies had lost their pirate outfits, too, but the buccaneers didn’t seem to mind.  Witchiepoo69 handed me a tankard and asked if it was my first time at a strip pirate party.  (It was.) 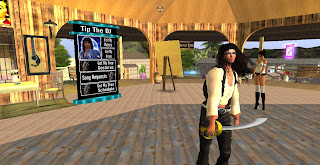 But the fun was all good-natured.  CaptainTomUSA said he “be having a jolly time.”  DixieDee hollared, “Yo Ho! Bottle Of Rum? Drink Up Cause We're About To Get Swashbuckled!”   JustinKredible’s outfit included a huge sword, which led to a few comments.   LITA (lalita.graves) said, “Oi Justin...ye had best be careful with that sword!”


All of the pirates I met tonight were fun and friendly.  I can’t wait to meet up with them soon.