It's probably something you've fantasized about during a traffic jam: revving up the engine, then charging and smashing into the mass of cars. Well, there's a place in Second Life where that behavior is not only allowed, but encouraged. Every Sunday night in the Random sim, there's a Demolition Derby in a track a few hundred feet above the sim. 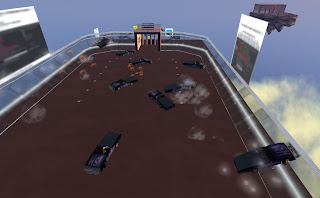 The track for the event isn't circular, but a few times longer than wide. Guard rails keep vehicles on the track, at least when drivers don't have a case of lag that causes them to travel a distance away before reappearing back on the track. At one end is the entrance in which participants can walk onto from the entry area, which has a notecard giver explaining more details about the derby.

Dropping by one night, I heard the people running the event ask for all those interested in racing to be on the field. About a couple minutes before the event, cars were rezzed in two rows, one for each side of the track and pointed back end in. The racers were asked to get in, and about twenty seconds before the start, those cars still empty were derezzed and the racers told to get ready to start.

And once the staff yelled "Go!" the cars charged, rear end first to keep the engine from being hit. Or in this case, to minimize the number of hit points taken away. It was a chaotic scene as cars moved around to ram one another and avoid being rammed. None of the cars tried to circle around and stay out of it as the rules stated everyone in the derby had to "actively and continuously fight" or otherwise be flagged and disqualified. 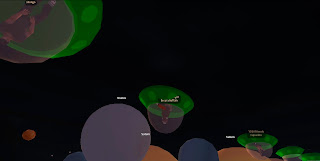 Once a vehicle's hit points reached zero, it blew up. Drivers were asked to at least fly up into the air so they wouldn't get in the way (free flight feathers were in the lobby entrance for any newcomers). Voice chat was openly encouraged, and I could hear a few excitedly calling out as they went around the track. I didn't hear any insults or taunting.

Different rounds had different vehicles. Round two involved racing in semi-truck cabs. Round three had a unique race. The participants jockeyed about in small flying saucers, obstacles resembling planets were added into the course, and vehicles could suddenly go up the sides and on the underside of an invisible force field, going upside down. It could be quite confusing and disorienting. 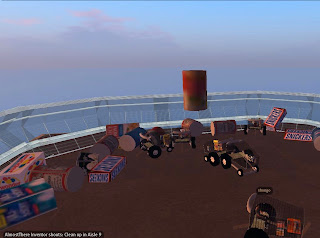 Round four involved something not usually seen on wheels: driveable pool tables. Back to a normal course, it wasn't long before the less skillful drivers were behind the eight ball. Round five was back to smashing around in cars, but police cars. There were no tickets for reckless driving that day as all but one ended up disabled. The sixth and final round had another unique run. The drivers were in shopping carts, and when they bumped they would loose of of the items inside, and it would appear on the course a few times larger as an obstacle. The course was soon quite a mess, "Clean up on isle 9."

The winner of the final round got an 800 Linden prize, with 400 going to second place.

Following the event, I had a chat with one of the people  there, Barbie Alchemi. She explained her brother AlmostThere Inventor ran the place, and she herself was the head of the Creations for Parkinsons sim. So besides a great place to have a smash-up-derby, the track has connections to a major charity in Second Life. One which will be for another story.

To get to the Sunday Demolition Derby Track, head to Random (6, 92, 301). Once again, scheduled races are from 6 to about 7 SL time every week. Between events, the track is available for "practice and grudge matches."