Going to the Burn


This weekend, the Burn2 art and music festival opened in Second Life. Taking place across six sims and eight days, there's a lot to see and experience with over a hundred arrests and dozens of live musicians and DJs apiece. 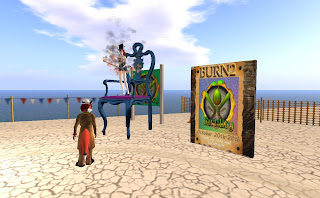 Heading over to the entrance at the Playa in

Burning Man - Deep Hole, (84, 9, 24), I was greeted by one of the staff, Tee Auster, "Heya, welcome to Burn." Talking to her, she described the weekend as "pretty busy. … we had a great turnout last night for the Lamplighters." She gave me a notecard with a list of landmarks, and if I had any questions let her know."

Green arrows led from the entrance into the festival grounds, the trail looking like tire tracks in the Black Rock Desert. I soon came across a few teepees with packages of freebie goods, which included mutant vehicles and funny hats. Although it stated "backpack, wear me," there was no backpack in there, but there were plenty of other freebies. 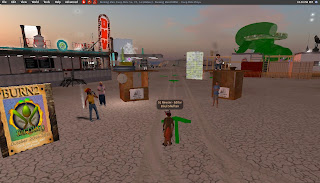 Passing a few mannequins, there was the DMV (Department of Mutant Vehicles) Diner, which I stopped at to take a break. There was also a map of the six sims, with the Guru stage in the northeast of the sim of the same name, and Newser writer Gemma Cleanslate's partner DJ Qwark having a place in Burning Man - Deep Hole.

I ran into one other Burn2 staff member, Chrisssy (Chrstenhp), "Welcome Bixyl to Burn2." Asking her who was coming to the festival, she answered there were "a lot of" newcomers attending, reasoning they saw it in the Second Life Destinations Guide, but there were plenty of seasoned residents coming too. 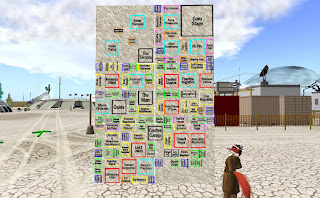 Within sight, there were a number of exhibits. There was a 3-D maze that looked promising. But I saved that for later as it seemed a little crowded. One exhibit close to the entrance was Caro Fayray's "The Maypole, the Brain, and the Beanstalk," which had a few more freebie items such as a brain hat that sparked and a walking stick that made one's avatar dance. Other exhibits included a garden DJ stage, a flower garden with birds and bees, three giant spiders throwing webbing over an avatar-sized empty chair, and many others. And around the sims were the decorated toilets that appear every year. I also noticed a pet kitty walking the grounds of one exhibit. No doubt set there by the artist as company while building the place, and left there since he seemed happy enough. 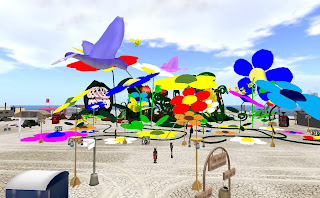 There was only so much one can see in a few hours. Clearly, one will need to come back more days to get a good look. And of course there's the Burning of The Man and the Temple Burn next weekend.

Burn2 is based on the real life Burning Man festival in the Black Rock Desert in Nevada, which is considered by some to be a partial inspiration for Second Life as some Lindens attended it during the development of the virtual world. For several years, Linden Lab sponsored a Second Life version of the festival, which then was called Burning Life. But eventually Linden Lab stopped it's sponsorship. The people running the festival rented a few sims and renamed the event Burn2. Today the Burners, as the serious fans of Burn2 are called, are more active than ever with smaller events with the theme elsewhere in the year. But there's nothing like the big event.

For a list of landmarks, Daniel Voyager had these listed in one Burn2 article of his: