To celebrate the spooky fun of Halloween, ZZ Studios announced on October sixth they were having a "monster mash" party at their Club Stripes. Just doing a photo shoot with them, I wanted to check out their party. 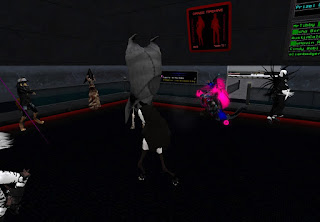 There was an amazing prize of 1,000L for the best Halloween costume. I didn’t have anything very spooky except for a no face costume. The no face is the lonely ghost who enters the bathhouse in the movie "Spirited Away." I got a few compliments from the other spooky party goers. The scariest and best costume by votes was "Oogaboogaman." His costume was the Oogie Boogie character from the "Nightmare Before Christmas" created by Tim Burton. 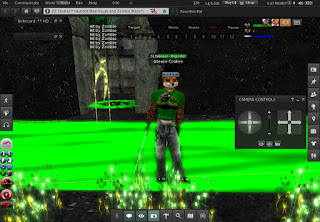 ZZ Studios went a step farther to celebrate Halloween. They created a zombie maze that was pretty fun. First you had to grab freebie weapons from a nearby box along within uploading a HUD and bar above your head showing your hit points. It was a whole new game within Second Life. They used the grim combat system to do combat with those nasty zombies. You had armor, health and ammo in your HUD. I equipped myself with a sword to hack away at the zombies to give them a more permanent grave. The zombies had high detail and were cool and gory to look at. The maze itself was dark and forbidding as well with dark stone walls. Asking, I found out Rhin Forti and Mercy Moonwing created the zombie maze. They both did an aMAZEing job.

The combat was easy. Zoom into mouselook, and there was a set of crosshairs on your screen to target those zombies. The hard part was staying alive. Just like a horror movie, they surround you and bite and claw at you until you fall over, dead. You’ll know when you die when your avatar falls over dead.  Unlike the soap opera "One Life to Live," you have unlimited lives. So don’t worry if you end up dead. Click "escape" and then click where it says “You have died, click here to be revived.” After a few messy deaths, I figured out backing away while attacking seemed the best way to keep zombies from biting me as I hacked away. 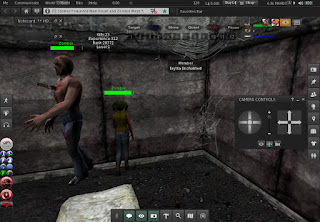 Over time I got a few kills and some experience, but after a while I wanted to look into the madhouse also on the ZZ Studios sim. Standing at the entrance, Darkefur Fraker joked that the hearse was about to make another trip. Risking my life anyway, I entered the madhouse.  It certainly was spooky and scary inside.  Navigating around was certainly difficult as there was no direct path throughout the madhouse towards the top. While in the madhouse, I heard the audio playing of a creepy movie along with scary images all around. Just like the zombie maze it was an excellent environment like a horror movie. Something scary I saw were buzzsaws at my feet with blood coming up. In the madhouse the enemy wasn’t zombies but more of a puzzle of how to get to the top by navigating through the twists and turns. Oh and there was a tentacle monster.

Darkefur Fraker and Mercy Moonwing created the madhouseand they did a great job. The madhouse did drive me mad not in anger more like insane trying to figure out how to get to the next floor or area. If you want a challenge try out their Madhouse.

Looking for a fun way to celebrate the spooky time of the year? I recommend ZZ Studios’s zombie maze and madhouse. There might be some ZZ studios staff or other vistors to hang out with as well.

Editor's Note: To those who don't know, Cindy "Zig Zag" Babii's ZZ Studios has an overall adult theme with it's adult clubs and sexually themed media up for sale.
Posted by Bixyl Shuftan at 5:30 PM